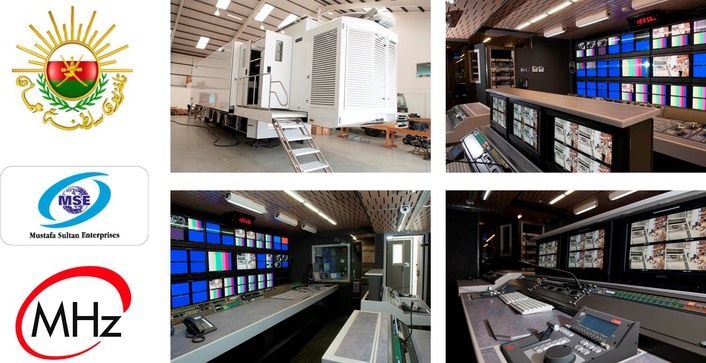 .
Megahertz Broadcast Systems (MHz), in association with its local partner Mustafa Sultan, today announced that it has been awarded a contract for the build of a new outside broadcast unit for Oman TV. The UK-based independent systems integrator is now in the process of building the expanding articulated vehicle, which will be capable of handling 3Gb/s signals for 1080/50p production. It is also fitted with high performance air conditioning to ensure staff comfort in the high temperatures experienced in Oman in mid-summer.

The 13m trailer has a single expanding side and will host 12 Sony cameras, two providing super slow-motion, plus an extra camera on a Links wireless system with remote control. The cameras all use fibre connectivity, and the order includes a range of Canon outside broadcast lenses (up to x95), Sachtler supports and Egripment sports dollies and tracks.

Because of the potential for extremely high temperatures, the unit features a unique design element: the main cable termination panel is not on the outside of the truck but in a walk-in compartment which is individually air-conditioned. This means that riggers can connect up the truck in relative comfort. The air conditioning system throughout the truck has a high level of redundancy and significantly over rated to maintain cool environments for both operators and equipment.

Alongside the trailer Megahertz is providing a tender in a 9m fixed axle vehicle. As well as carrying equipment and cables this vehicle also has a small air-conditioned workshop and monitoring area to support the unit’s engineers.

“This project for Oman TV is a clear demonstration that nothing beats experience when it comes to designing outside broadcast units,” said Steve Burgess, technical director of Megahertz Broadcast Systems. “What we have is an advanced production platform, in a vehicle which is very carefully tailored for the specific requirements of the user. Details like providing special protection for rigging make all the difference when it comes to day-to-day operations. As a specialist in OB design and build, it is that level of attention that we bring, which is why our projects are so successful.”

Oman TV placed the order with Mustafa Sultanand Megahertz Broadcast Systems in December 2012, and both the outside broadcast trailer and its tender were delivered to Oman in August 2013.

About Oman TV
Oman Television is now under the umbrella of Public Authority of Radio and Television now known as PART. PART is the national television and radio channel operator in the Sultanate of Oman. Oman has been developing rapidly in the past couple of years and as part of its development program and to meet the needs of live coverage of sports and other events, in the Sultanate, Oman Television has invested in this HD OB Van. Oman is a lover of sports and any sports event happening in the country, it is Oman TV’s endeavor to telecast these events to its local population in High Definition format.  Oman has hosted sports events like Gulf Football Cup and Asian Beach Games in the past few years.

About Mustafa Sultan
Mustafa Sultan is a well-known name in the Sultanate of Oman, having its trade business in the activity of Security and Communications. The company is almost 35 years old. The Broadcast Division of Mustafa Sultan was started 12 years ago, as we saw a growing need in this market segment. Mustafa Sultan has been a consistent supplier to Oman Television and winning this order for the supply of a 12 HD camera expandable OB Van was a prestigious job.

About Megahertz Broadcast Systems
Megahertz Broadcast Systems, a Piksel company, is a leading independent broadcast systems integrator. Its highly experienced engineering team provide a complete service from engineering planning and design through product evaluation and project management to commissioning, training and support. The team is as adept at file-based architectures as it is in traditional broadcast infrastructures. Recently completed projects include outside broadcast vehicles, high definition studios, playout facilities and earth stations, as well as audio visual installations for applications as varied as mosques and the London Stock Exchange.