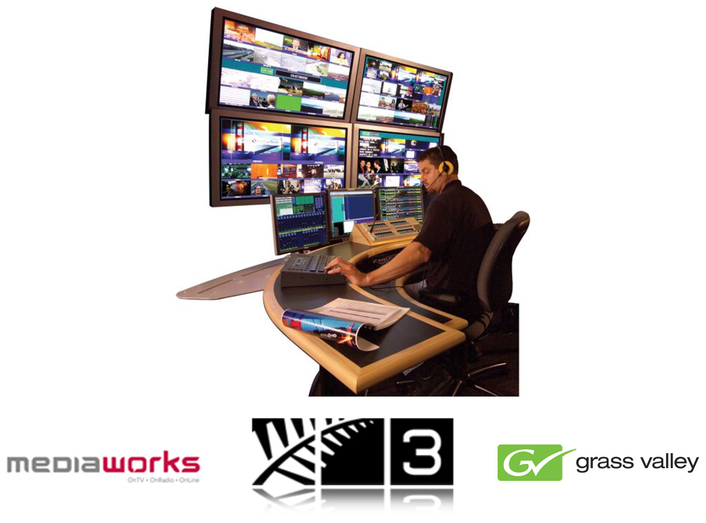 The terrestrial TV network operates a busy news department
Looking to reduce costs and streamline its operations, Mediaworks' TV3, based in New Zealand, has become the first television network in the country to migrate its studios and future news broadcasts to a Grass Valley™ Ignite™ HD scalable automated production system. This brings the number of Ignite systems to 22 in 16 locations within the Australia/New Zealand region.

The comprehensive file-based system is tightly integrated with TV3’s ENPS newsroom system and successfully went on air in mid September. The system provides the TV3 staff a high degree of production control and efficiency while significantly improving the news and current affairs channel’s on-air look.

The terrestrial TV network operates a busy news department, which will make daily use of the Ignite HD system, to produce more than nine hours of original news programming per week. The Ignite system is designed for live production automation applications, where a single operator can run an entire multi-camera production. More than 100 systems have been sold worldwide to date.

"As we have seen in North America and elsewhere, the Grass Valley Ignite HD system is helping more broadcasters around the world make their operations more efficient and get more value out of their existing resources," said Jeff Rosica, Senior Vice President of Grass Valley. Mediaworks' TV3 is just the latest in an ever growing list of broadcasters who have incorporated the Ignite system into their facility to take advantage of the workflow and financial benefits it brings."

The Grass Valley Ignite HD system can be ordered with one to four M/Es, up to 32 control ports, and is completely scalable from 24 to 96 video inputs and 24 to 96 audio inputs, The control room system offers an integrated Grass Valley Kayak™ HD video switcher, audio mixer, that simplifies production and allows a single operator to run an entire newscast. An optional video panel is available for those broadcasters who want to employ a manually operated system. As well, customers with an existing Kalypso™ or Kayenne™ Video Production Center can also add production automation with Ignite Konnect.

MediaWorks NZ consists of TV, Radio and Interactive. MediaWorks TV encompasses the national stations TV3 and C4, while MediaWorks Radio operates out of 23 markets and consists of the nationwide brands MORE FM, RadioLIVE, Solid Gold, The Edge, The Breeze, The Rock, LiveSPORT and Kiwi FM, as well as regional stations Mai FM in Auckland, Northland and Rotorua, Times FM in Orewa, Radio Dunedin, Coromandel FM, and George FM. MediaWorks Interactive is the new media division of MediaWorks that looks after 18 websites and a mobile network.