Media Businesses in Bergen are Relocating Together in 2017 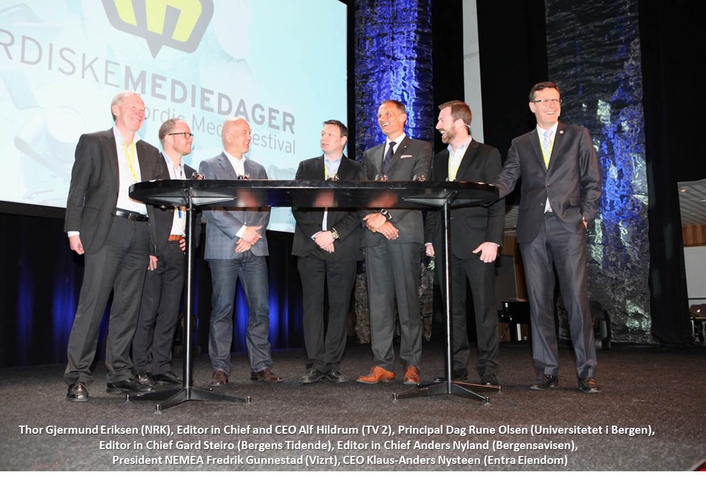 TV 2, NRK, Vizrt, Bergens Tidende, Universitetet i Bergen and Bergensavisen
Today, we are writing media history in Bergen, Norway. TV 2, NRK, Vizrt, Bergens Tidende, Bergensavisen and the media department at the University of Bergen are in 2017 relocating to a common building called MediaCity Bergen. This project is unique in the Nordic countries.

Late yesterday afternoon (Thursday, 8th May), the board of directors at TV 2, as the last signing tenant in the media cluster, approved a move to Mediacity Bergen (MCB) located at Lars Hillesgate 30 in the center of Bergen. In 2017 MCB will be the new facility for 1200 media professionals and students. The construction of the new facility starts early next year.

Strengthening the media presence
TV2 is very proud to have taken the initiative of MediaCity Bergen. This project is unique in the Nordics and will strengthen media´s role in Bergen. A move to new and more flexible, offices, tailored for  a TV-channel, is also very important to further develop TV 2 as a channel with their headquarter in Bergen, said Alf Hildrum, CEO of TV 2.

This is a huge step for Bergens Tidende, said Gard Steiro, editor in chief at Bergens Tidende. Norwegian newspapers are in a digital revolution and in MediaCity Bergen we have the best possible chance to develop the journalism of the future, he continues.

NRK Hordaland is proud to be part of another “Norwegian Attraction” (sic: program name of one of the NRK shows). We will create a strong innovative development environment that we think will be recognised both nationally and internationally. Together we are stronger, said Unni Arnøy, regional editor for NRK Hordaland. 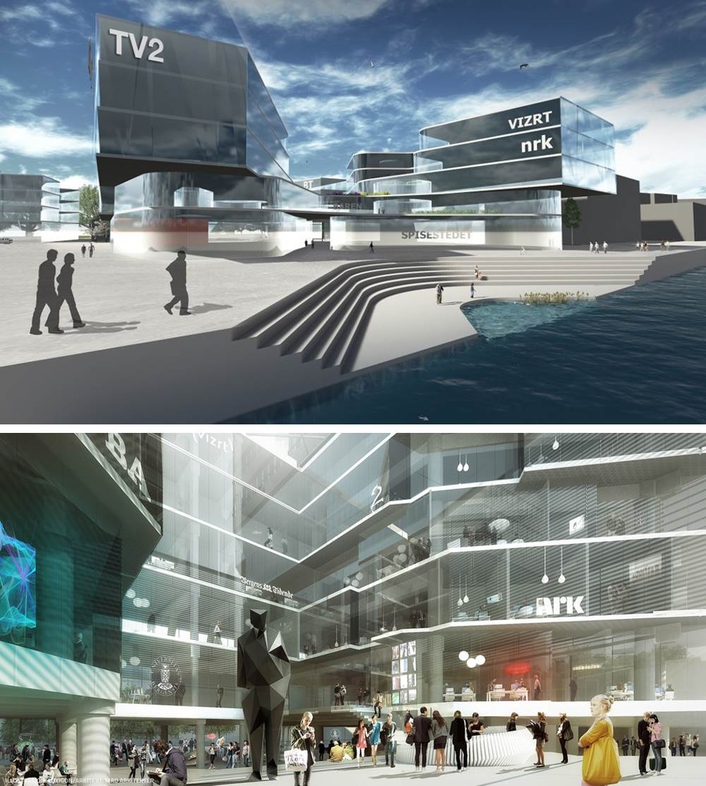 Entra OPF, a daughter company of Entra Eiendom and Oslo Pensjonsforsikring, will be the development of the building and is also the owner.

MCB, which is created by MAD Arkitekter, will have a unique and interactive media facade facing the main street, Lars Hillesgate. Inside the main entrance there will be a huge atrium which will be the mingling point for all things media in Bergen. There are also common meeting room facilities, a greenhouse environment, and various restaurant offerings. The tenants will jointly cooperate on technical solutions, data centres and various other service offerings which will create synergies. MCB will be the new place to meet for the media business and their audience.

Vizrt is today the largest supplier of real-time graphics and video solutions and are also moving their international headquarters to MediaCity Bergen.

If Vizrt are to continue to be the world leader for our solutions, we need to stay very close to our customers and develop our products in close cooperation with them. In MCB, we get fantastic access to high level of competence from TV, newspapers and education institutions, and can develop the future of media tools together with them, says Fredrik Gunnestad, President NEMEA in Vizrt.

Closeness to technology is also crucial for Bergensavisen.

Better offices for a lower cost and great opportunity for technology and content innovation will make BA a prime driver for digital news and become a sought after employer, says Anders Nyland, Editor in Chief of BA. 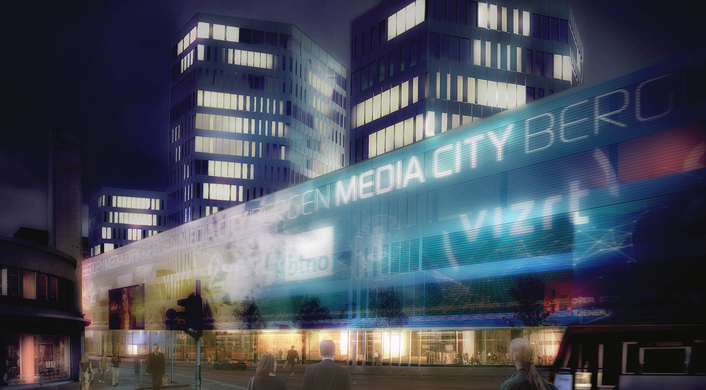 UIB goes “all in”
The University of Bergen (UIB) was the first party to whom TV 2 addressed the new MCB project. UIB is making a heavy investment to moving into MCB. They plan to move their 220 students for the media education courses and have created strong cooperation models with the other tenants, particularly with TV 2 in which the students will have access to the TV 2 studios.

UIB is going to create a very attractive place for media education with programs from bachelor to master level. We are making an investment to prepare the grounds for the best possible innovation for digital media. Students, scientists, journalists and developers will represent the forefront of digital journalism, TV production and media technology. MCB will be the meeting ground between the media industry and the university, says the principal of UIB, Dag Rune Olsen.