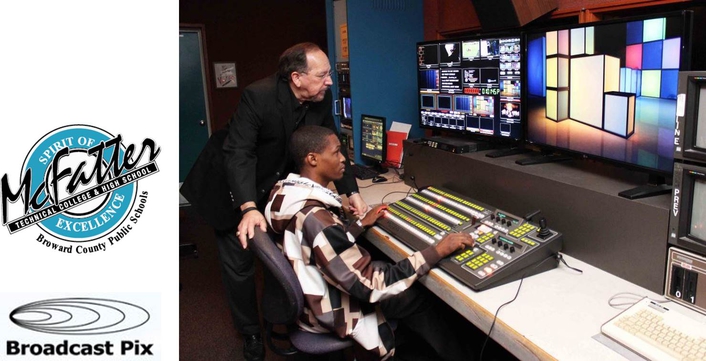 Lead television production instructor Frank J. Boulton and student Charles Breland, Jr., demonstrate the new Granite 6000
Broadcast Pix™ today announced McFatter Technical College and High School in Davie, Fla., is training the next generation of video professionals with a Granite™ 6000 integrated production switcher. New students begin learning the basics of switching with the Granite during their first of four courses at the school, and produce 30-minute practice “drills” every Friday and every other Thursday to test their skills.

Part of Broward County Public Schools, McFatter offers a television production curriculum that usually take 17-20 months for students to complete. Each weekday, adult students spend five hours at the facility, plus complete an hour of online coursework. High school students spend three hours at the facility during the afternoon. Students who complete the program earn a Certificate of Completion from the state.The television production facility is housed next to BECON, the School Board of Broward County’s educational broadcast station. Students often assist with productions at BECON. In turn, BECON will sometimes produce programming in McFatter’s three-camera studio using the Granite and with McFatter students in the crew. “This is definitely a hands-on approach,” said Frank J. Boulton, lead television production instructor.

The new Granite 6000 represents a significant upgrade from the facility’s aging Intergroup analog switcher and QuantaFont CG. It was installed in late April by Pro Sound, a systems integrator with offices in Florida and California. Boulton said Broadcast Pix’s integrated approach, including the Fluent-View customizable multi-view, made it a very cost effective choice for upgrading the facility.  “I like the fact that everything is there,” Boulton said. “This is the best way to go.”

McFatter still has a dedicated tape operator area outside the main control room with DVCAM tape decks, but the Granite’s built-in, dual channel clip store is being used to play commercial breaks during drills. “It’s a lot easier than tapes,” Boulton explained, “and that’s what they’re going to use out there.”

The built-in Inscriber CG has helped unlock creativity in many of Boulton’s students. Many of them have experience with other graphics programs, so they quickly understand the workspace. “They’re producing some amazing graphics,” he added.The facility also features five dedicated Final Cut Pro/Adobe Premiere Pro edit suites, as well as a classroom with more than two dozen 27-inch iMac computers with Final Cut Pro and Adobe Premiere NLE software. Boulton hopes to use Watch Folders, Broadcast Pix’s built-in content management system, in the future to deliver completed projects directly to the Granite over the school’s network.

Although there was a learning curve for students and faculty alike, mastering the basics on the Granite proved relatively simple. “Students transitioned fairly easily,” said Boulton, who has worked in film and video production for more than 44 years. “I was not used to using a server-based switcher. I thought it was going to be harder.”