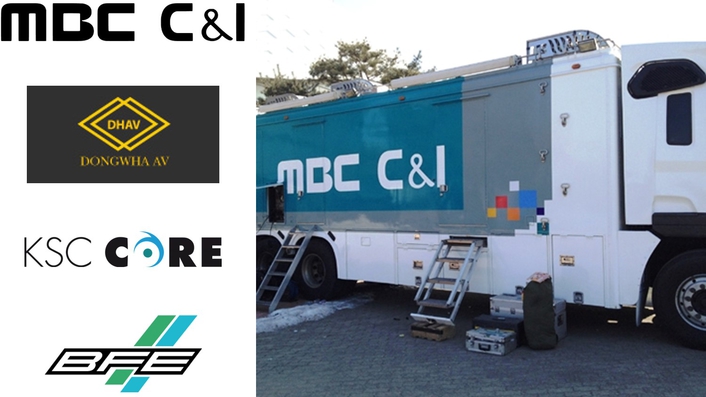 KSC CORE, the broadcast control and monitoring solution developed by German systems integrator BFE, was chosen to be used in their new 4K OB van for the Munhwa Broadcasting Corporation (MBC). The South Korean company is one of the country’s leading broadcasters and uses its fleet of OB vans to report on top sports events and news throughout the country.

The implementation for the OB van is scheduled to start end of July. The South Korean systems integrator MBC C&I, part of the MBC group, together with BFE and its South Korean partner Dong Wha AV, will act quickly to integrate KSC CORE into the OB van. The system will play a key role in the vehicle’s setup by controlling and monitoring the broadcast infrastructure as well as 10 4K cameras.

“The project marks the premiere of BFE in South Korea and was made possible by our partner Dong Hwa AV.”, says Jürgen Loos, Director of Sales & Marketing at BFE. “We are looking forward to see our first KSC CORE system deployed in a South Korean OB van.”

Berend Blokzijl, Senior Sales Manager KSC at BFE further adds “Given the narrow time frame, our KSC CORE engineers once again have the chance to prove their ability to finish complex work in a short time. Together with our partner Dong Hwa AV we are sure to be up to the task.”

The Munhwa Broadcasting Corporation (MBC) is a South Korean multimedia group that provides numerous TV and radio channels as well as digital video and audio streaming services online. As such MBC, which operates from headquarters in Seoul and 17 regional studios throughout the country, is one of the leading broadcasting companies and possesses the largest broadcast production facilities in South Korea. Besides radio and TV studios and a digital production center called “Dream Center”, MBC also employs a fleet of OB vans for news and sports events.

KSC CORE by BFE, is a highly available, adaptable control and monitoring system that supports all present and future needs in broadcast operations. The software solution enables fast and flexible control of studio and OB Van systems by using production setups, intuitive GUIs, and control panel layouts. Efficient signal and resource management in the MCR is guaranteed as well as the ability for operators to seamlessly work in the SDI and IP world. To date, KSC solutions have been deployed worldwide more than 900 times.

BFE Studio und Medien Systeme GmbH is a manufacturer-independent broadcast systems integrator with more than 40 years of experience in the planning and implementation of complex projects in the field of broadcast and media technology. As an expert and reliable partner, BFE supports customers in Europe, Asia, North Africa and the Middle East in the implementation of tailored solutions for their specific requirements.