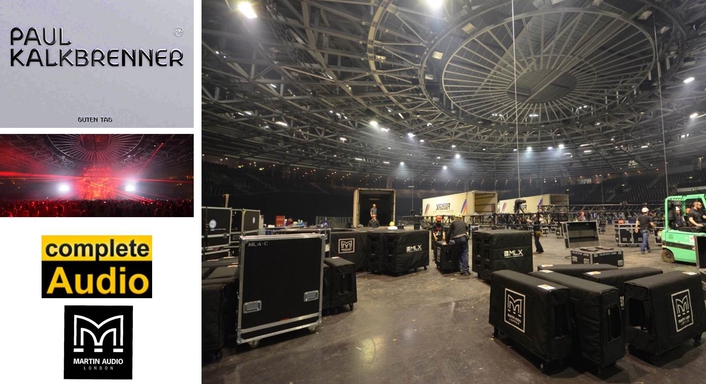 André Rauhut’s company first introduced Martin Audio’s award-winning Multi-cellular Loudspeaker Array system to the artist’s production back in 2011, when the two operations started working together. “We first used an MLA/MLX rig for a big outdoor show,” remembers Rauhut. “They really loved how the system sounded, and as a result, they have since continued to work with us. MLA has become vital to the quality of the live sound.”

For the current Guten Tag tour, which takes in most European countries, Complete Audio are providing a total of 26 MLA enclosures, two MLD Downfills, 16 MLA Compacts and 18 MLX subs (scalable to suit the venue). The main hang normally ranges between nine and thirteen MLA plus MLD, in L/R configuration, with MLA Compacts flown as outfills where necessary — and other nearfills and infills applied, depending on venue size.

Initially Complete Audio experimented with the MLX sub configuration. “We tried broadside — with and without cardioid layout — but after a couple of shows, we found the best set-up to be three MLX stacked on top of each other, outside on each flank, with the other MLX’s arranged in stacks of two facing forward alongside the stage,” explained the Complete Audio MD. “This broadside approach, accompanied by two ‘in your face’ stacks on the outsides, provides both an even coverage and some real punch.” The subs are delayed from the centre outwards to achieve extra spread in the larger arenas.

Such a versatile range of source inputs and heavy bass requirement would test any sound set-up, and André Rauhut admits, “MLA is the only system I know of that can cover a large arena with almost no difference in sound or level throughout the entire venue.

“Due to its design, it ensures that those up in the bleachers can enjoy the same quality and level as the people close to the stage. And since we are talking electronic music, there is a need for extreme sub levels all the way down to 30-40Hz! I find the MLX the most powerfull sub in the market today … it can easily outperform any other competitor. And given its size, it´s really amazing what you get out of a single enclosure.”

Fortunately Paul Kalkbrenner’s FOH engineer and head of audio is Nils Uhthoff — a long time MLA operator who started using the system back in the days when Martin Audio was still testing the pilot. He is supported by monitor engineer, Alexander Lewin, while other system techs are Janine Fidrich, Thomas Birnbaum and Julian Hoffman. For the stage, a pair of Martin Audio LE1500 wedge monitors, in L/R stereo, have been deployed along with two WS218X subs, while the support DJ acts also have access to a pair of LE1500’s and a WS218X.

One advantage the system engineers have experienced is Martin Audio’s new DISPLAY 2.1™ optimisation software. “Speed is the main advantage,” says André. “But considering its complexity, it is a really easy tool to work with. You can sketch out a large arena and come up with the entire splay and rigging angles in about 15-20 mins. I haven´t managed that with any other prediction software for generic line arrays... and all those do is give you inter-cabinet splay!

“DISPLAY also generates all the filters for every cell in every single cabinet in use while the coverage has improved over the older software version — it has gotten smoother.”

Considering all these factors, André Rauhut believes the performance of MLA has advanced immeasurably since Complete Audio first took the system out with Fettes Brot, back in 2011.