Two HD OBVans and two Tender Trucks
Two match days before the end of the season, FC Bayern München and FC Schalke 04 were topping the Bundesliga, Germany’s top football league, with level points. In the relegation battle, it was neck and neck until the last game, excitedly watched by a large TV audience. TV broadcaster LIVECAST TV Produktion’s two new OB vans were in on the gripping league finale, and produced a ‘basic feed’ of the football broadcasts. For the audio component, LIVECAST TV relies on Lawo consoles.

“The term ‘basic feed’ means that we produce video and audio signals, which are then made available to all legitimate buyers. The video signal is produced with a minimum of seven cameras, while the audio is mixed using the integrated mc²56 from Lawo. Buyers of our output include, for example, SKY, ARD’s Sportschau, and several other international broadcasters. Our goal is to deliver an output of the highest possible quality,” explains Harald Hübner, manager at LIVECAST TV.

The mc²56 consoles in both OB vans feature 48 faders (16/16/16) and 144 DSP channels, with the HD-Core having a routing capacity of 8,000 x 8,000 crosspoints. In addition, each vehicle is equipped with three stageboxes and three DALLIS frames, as well as DALLIS intercom cards. “Lawo’s router cards in the HD-Core enable the operation of Riedel talkback units via fibre optic connection, with the maximum range. Seamless interaction between the Lawo console, the Riedel talkback system and the remote control facilities is particularly noteworthy,” explains Hübner. 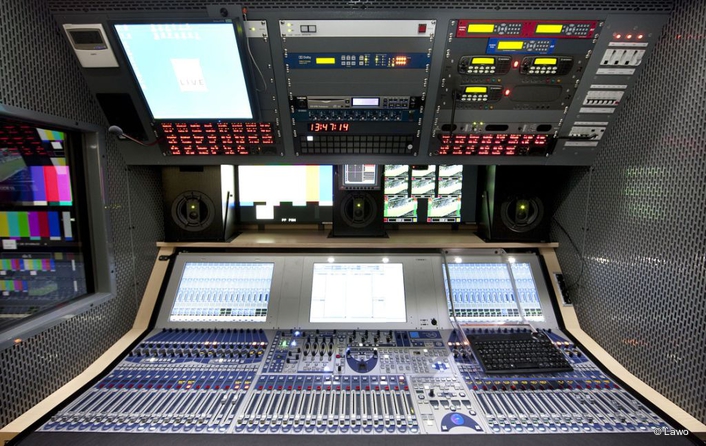 Lawo’s AfV function (Audio-follow-Video) is frequently employed. This allows the Lawo console’s inputs to follow camera movements, thus enabling viewers to experience an authentic stadium atmosphere. Moreover, production preparation sessions are further simplified through the use of the console’s programmable presets. “The integration of the router in the console’s HD-Core is another important factor, eliminating previously required transitions between the console and a routing matrix. We frequently run two independent productions with a two-man crew, where one sound engineer can mix the basic feed while the other produces the live feed, all thanks to separate AFL and PFL buses,” elaborates Hübner on their mode of operation.

The decision to commission an OB van was taken because of the lack of production facilities in the segment of small to mid-size HDTV OB van. The compact HD OB vans feature up to ten cameras and are perfectly tailored to LIVECAST TV’s productions: none of the vans have extendable elements and therefore only require a minimal setup area. This is especially important at the 2nd division venues, where space for large OB vans is usually scarce. Moreover, the vehicles require only one 63A connection, whereas large OB vans need a 125A hook-up.

With Grass Valley from Weiterstadt, Germany, acting as the main contractor, Lawo was still directly involved in the project: “When we worked with Lawo directly, we were able to handle any adjustments and mechanical configuration easily and quickly. During the project, their customer support was excellent, and their geographic proximity was an additional advantage,” states Hübner. Stefan Huwer, sound engineer for the OB vans, adds: “Simple, intuitive usability and the prevalence of the product throughout the industry are definite plus points for Lawo’s consoles. Many sound engineers need only a short training period, since they have already used a Lawo console at some point or another in their careers.”

LIVECAST TV Produktion GmbH is a subsidiary of Sportcast GmbH, providing and operating HDTV OB vans for the creation, recording, post-production, and processing of audiovisual signals. Sportcast GmbH (in turn a subsidiary of Deutsche Fußball Liga GmbH) has produced live signals for all the matches played in the Bundesliga and 2. Bundesliga leagues since 2006. LIVECAST TV was formed in late May 2009, and has been in full operation since the completion of its OB vans in October/November 2009.

Lawo, headquartered in Rastatt/Germany, specialises in developing, designing and manufacturing mixing consoles and matrix systems for radio and TV broadcasters, as well as for use in live events. Standards of high quality and innovative technology are supported by decades of experience in the field of professional audio technology. In 2010, the company celebrates their 40th anniversary.
Lawo’s product range covers digital audio mixing consoles for use in radio, broadcast, production and live applications, including the required software. In addition to the provision of matrix systems and audio networks, Lawo also carries out project engineering tasks and acts as a main contractor for radio OB trucks; these services include user training and maintenance. This high level of expertise results in a comprehensive support service for Lawo customers.