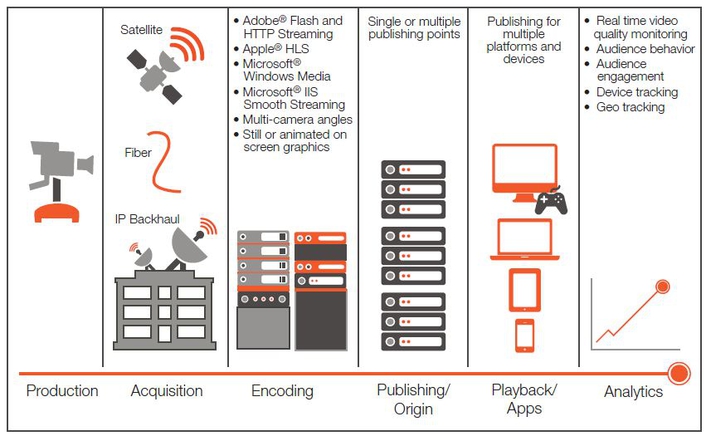 Here’s a summary of my presentation covering content acquisition and encoding– iStreamPlanet’s core expertise. This is presented within the context of the YouTube Live platform. If you’re looking for more information on the complete live event workflow I recommend reading the whitepaper 6 Steps to Broadcasting a Live Event.

Acquisition and encoding for live events is all about what you can afford and how much risk you can tolerate.
If you’re broadcasting from a venue that has some pretty robust Internet connectivity, the least expensive option may well be to encode the primary RTMP stream on-site and ingest directly to YouTube. Getting the video feed to the actual encoder may involve a number of different technologies– wireless, fiber optic cabling, etc– all working together to get the video from one place to another within the venue itself. Ultimately, though, it’s usually the simplest way to go– but it’s rarely the most secure or redundant.

If you’re going to encode on-site, you have a number of options. At the low-cost end of the spectrum would be a well-powered laptop with some sort of AV capture interface and some type of encoding software running on it. There are a few different software solutions that will output RTMP but the two that are best known and best supported are Adobe’s Flash Media Live Encoder and Telestream’s Wirecast product. The latter of the two actually has a variant that is intended solely for use with YouTube Live and they just released a new version of it.

The potential for failure here is relatively significant, though. You’re running a piece of software on a consumer-oriented OS with a capture interface hanging off the side attached by a cable. Any number of things could go wrong and take your show down. For this reason, I personally don’t consider this an option for the live events we produce, no matter what the budget.

Another option for on-site encoding would be a dedicated appliance. There are a bunch of new entries on the low-cost end of this field, but my favorites are the Teradek Cube and the Teradek Slice. These devices are small, rugged and really easy to operate. The only downside is the limited feature set. These devices output a single stream– either RTMP or MPEG-2TS– and that’s about it. There’s no support for encryption or DRM or captioning or multiple audio tracks or a lot of the features that are offered by enterprise-class encoders like Cisco’s AnyRes line or the Elemental Live family. Of course, a Teradek Cube is about one-tenth the cost of Cisco’s leading AnyRes box.

If on-site broadband connectivity isn’t an option, or you’re simply not comfortable with the potential pitfalls of on-site encoding, then you’ll want to encode off-site, either with your own acquisition setup or through a managed service provider like iStreamPlanet. Of course, that means you’ll need to get your video feed to that off-site location. There are a number of options to explore:

1. Foremost, and certainly the one I utilize most often, would be satellite. It’s sometimes the easiest method and almost always the fastest. Depending on where the event is taking place, I can have a satellite uplink truck on-site in a matter of hours. When you’re sending radio waves 22-thousand miles out into space and back, though, there can be a few hiccups. Digital equipment is relatively troublefree, but RF gear is notoriously finicky. There are also weather issues to contend with and truck positioning is always a concern.

2. For these reasons, some customers choose video fiber as their primary acquisition path– sometimes with satellite as a backup if the event is very high-profile.  By video fiber, I’m referring to certain fiber optic networks that are dedicated to video transport. Networks like Level 3’s Vyvx platform. There’s also TheSwitch. I like a company called Hibernia a lot. So there are a few options but primarily, if you use fiber, you are either transporting uncompressed video which can be a whopping 1.5 gigabits-per-second with HD content or you can compress the video using standard MPEG codecs and transport over ASI at greatly reduced rates. Either way, while there are still things that can go wrong, they’re usually due to operator error and are easily fixed. There’s simply less moving parts than with satellite, but fiber transport does require that the venue you’re in has connectivity to a video fiber network. That’s usually not the case and so fiber transport becomes very costly because you need to have your own local loop and a video codec installed. It can be more of a hassle, in that case, than the extra stability is worth.

3. The last and perhaps most unusual of the three off-site methods is IP transport. This is normally utilized over private IP networks. These networks can be multicast–for one-to-many transport– as we did with the 2010 Vancouver Olympics, or they can be unicast for a one-to-one path. The chief advantage to acquiring video over IP is cost. Both satellite and video fiber carry substantial “occasional use” charges. If the event is over the course of many days, or perhaps you’re doing a recurring event every week, though, the upfront costs of setting up the private network may be substantial, but not having to pay by the hour makes all the difference. And there may not be any costs for setting up a private network at all, as there are relatively new options that utilize public internet as the transport medium, as in the case of Zixi, or even cellular networks, like the products offered by LiveU, Mushroom and Teradek.

Have more questions about live streaming to YouTube? Read the 6 Steps whitepaper.