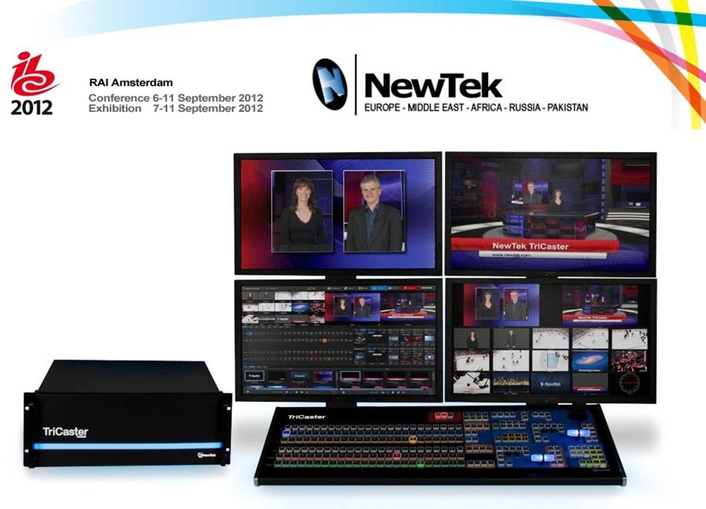 New technologies have emerged that have pushed live production in a next generation. Viewers' demands and expectations have evolved. Content distribution is being widened to a large selection of second screens. Multiplying broadcasting destinations has become a fact and a necessity for video producers.

The new line of TriCasters gives professionals the tools to create more content, with more creative possibilities, to publish to more destinations and therefore to reach more viewers.

The new line of TriCasters includes a large range of standard features, such as Apple® AirPlay® support and NewTek’s IsoCorder™ multi-track recording technology. It includes support for virtually every non-linear editing application for both the Mac® and PC, without the need for transcoding. The effects implemented in the new TriCaster series offer real-time warping that makes it possible to fly video away on a cloth-like surface, or integrate warping video into transitions in limitless ways, with sound. TriCaster effects are further enhanced with the innovative TransWarp engine, which provides the ability to build warping transitions for every visual source, including overlays.

TriCaster 8000, offers a unique instant publish and share on social media platforms feature integrated in the system. With TriCaster 8000 any type of content can be edited and published instantly to any platform, such as Youtube, Facebook, Twitter, but also sent to an FTP server, during live production. The seamless integration of live production with social media interaction provides immediacy, relevant content and a unified brand for both traditional video and social media audiences.

TriCaster 855 is equipped with 24-channel switching and inputs for up to eight cameras, five digital media players for video clips, graphics and titles, and two network channels for sharing computer screens and displays from wireless iOS devices. It has eight M/E-style virtual inputs and three outputs. The size, capacity and capabilities are scaled for professionals who produce big, live productions for delivery to on-air, projectors and the Web.

TriCaster 455 is scaled for any restricted space, including small studios, production vans, control rooms, backstage, a blogger’s office, etc. TriCaster 455 includes a 14-channel switcher with four camera inputs and the production and graphics power to deliver a network-quality show from locations that proved impossible before.

Today NewTek has a complete offering for Live production, from small to large Web TV Broadcaster, a price range from 4,995 to 35,995 euros, all of our customers are able to realize their own video content with the quality, flexibility and reliability of TriCaster .

NewTek 3Play™ 425, a 6-channel (four-in, two-out), slow motion system, includes proprietary NewTek IsoCorder™ technology which provides the simultaneous display, recording, and instant replay of up to four video streams, each with audio. The two outputs work independently and can broadcast a slow motion or a playlist or any live input. A mode allows synchronizations of the 2 channels for simultaneous broadcast of 2 events.

NewTek 3Play™ 820, a 10-channel (eight-in, two-out), slow motion system, includes proprietary NewTek IsoCorder™ technology which provides the simultaneous display, recording, and instant replay of up to eight video streams, each with up to quad channel audio. The two outputs work independently and can broadcast a slow motion or a playlist or any live input. A mode allows synchronizations of the 2 channels for simultaneous broadcast of 2 events.

NewTek brings the MINI LiveMan to IBC 2012, the first live production solution ever integrated in a compact SUV. The MINI Countryman powered by TriCaster 455 will be on SIS LIVE Outside Exhibit, stand OE101! Check out how you can go all-terrain with your live production in a MINI OB van.

LiveU, the pioneer of portable video-over-cellular solutions, will use TriCaster to showcase their integrated live video streaming and production solution in a live studio, on stand 14.365. The Next Web, the international technology, news, business and culture publication, will produce the live broadcast, bringing the latest news from the IBC show to its worldwide online audience…with TriCaster!

About 3D Storm & NewTek
3D Storm, major actor in the Broadcast and video industry, is the distributor of NewTek products in Europe, Middle-East, Africa, Turkey, Russia and Pakistan. 3D Storm distributes innovative solutions including TriCasterTM, 3PlayTM and LightWaveTM as well as a wide range of accessories, titling and virtual creation tools.