.
When Emmy, Grammy, Peabody (and more) Award winning musician Douglas Spotted Eagle isn’t making music, he’s up in the air, literally, as an aerial camera operator. One of his most recent aerial shoots for a global cell phone manufacturer entailed an unusual lighting challenge; a unit that would work during a free fall. His choice: Litepanels Sola ENG and MicroPro LED lights.

“The project involved lighting a model in free fall,” Spotted Eagle explains. “We had to transmit the photograph to social media before any of the skydivers had landed their parachutes. The first challenge in lighting was choice of instrument. Power is restricted by battery weight, as is the instrument size.

“A major challenge of aerial lighting is that there is nothing from which a bounce can be utilized,” he adds. “Additionally, the wind and speed conspire, making direct lighting difficult, and so the lighting must be diffused to not to create harsh contrasts.”

Spotted Eagle’s director wanted a specific style of light. “The instrument in the shot had to look big, be aesthetically pleasing, and needed enough throw to light up the subject,” he explains. The original decision was a cheap hurricane light. This had the profile the director required. But, the instrument didn’t throw enough light once the diffusion was attached. “I tried my Litepanels MicroPros, which I love, but they didn’t fit inside the now-gutted hurricane light. Not enough coverage. But, when I used the Sola ENG, it fit in the housing perfectly.

“I’ve always chosen Litepanels in most every production situation, simply because I’ve been using the product for so many years,” he adds. “I guess you call that ‘habit’. Originally, I used them as accent lights but today they are my main/primary instruments in more situations than I can count. That the colour doesn’t vary from instrument to instrument, that they are reliable, and the brilliance of the product design, has caused them to be the icing on the cake.

“No other lighting instrument could have been used in this situation, simply because of the size/shape/output considerations,” Spotted Eagle states. “I could not have done this project without the dimmable feature found on both lights, and the focus-ability of the Solas. I needed to spread the light out as much as possible within the housing I had to work with. 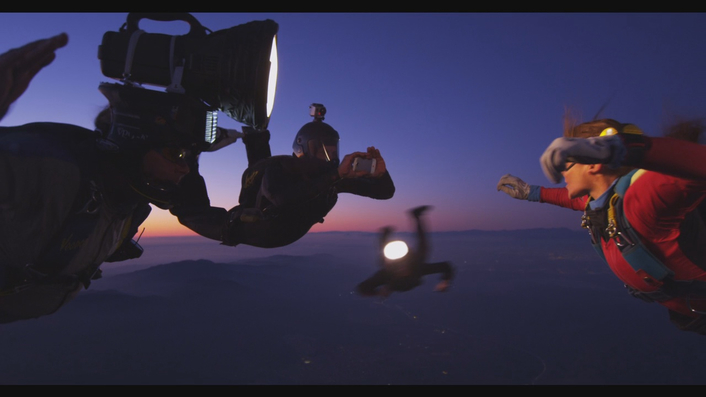 “Working with large batteries was simply not an option here; the lights are head-worn, with batteries either head-worn or chest mounted. Weight was critical, because if the weight on the top of the head is too high; deployment of the parachute can become a safety issue if the wearer’s neck snaps back.

“Ease of mounting was another reason that the Solas and MicroPros were chosen,” he adds. “Any video pro should have a couple of the MicroPros in their walkabout kit. They mount anywhere, provide excellent light for their size, and have an amazingly long battery life. I am replacing batteries in cameras 4 to 1 over the Litepanels.”

This project is now on the air and is part of a national advertising campaign on all major networks and internet streams.

Litepanels was founded in 2001 by 5 professional gaffers and engineers who saw the future and pioneered LED (light emitting diode) lighting for motion pictures, television and the audio-visual industry. Their Emmy® award-winning technology has now been used on thousands of productions worldwide and is trusted by the world’s leading broadcast organizations.