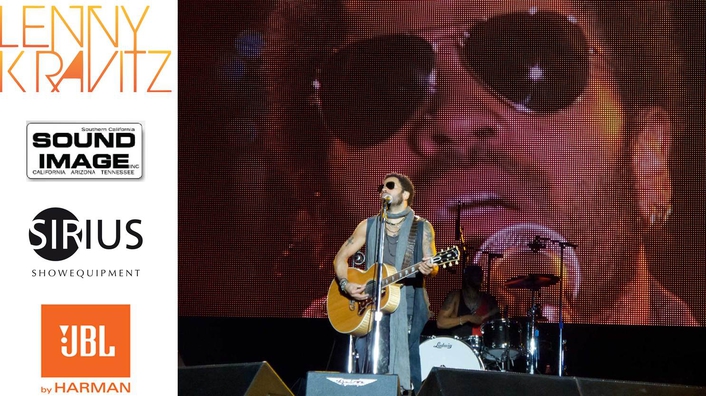 Lenny Kravitz recently completed his summer tour through Europe, where he relied on JBL VTX line arrays for sound reinforcement
When it comes to being particular about their sound, few artists are as demanding as Lenny Kravitz. The 4-time GRAMMY®-winning musician and songwriter might incorporate some retro gear into his guitar rigs and recording studios but for live sound, Kravitz wants the best today’s technology has to offer. While touring Europe this summer, Kravitz made the move to HARMAN’s JBL VTX Series line arrays.

“We have been long-time JBL VerTec users and had heard about the VTX line arrays and were extremely interested in hearing them, but did not have the opportunity until we went to Europe with Sirius supplying the touring rig,” noted system technician John Leary of Sound Image. “Because of the tight touring schedule, [front of house engineer] Laurie Quigley and myself more or less had one opportunity to listen to the VTX and make a decision on whether to use it for the rest of the tour.”

Leary noted the clarity and power of VTX in choosing the system for the tour. “The VTX system delivers consistent coverage at the levels we need throughout any venue,” he said. “In one sense, the power of the VTX line arrays enable us to do more with less boxes, but at the same time, because of their light weight, we can hang more of them than we could any other line array speaker.”

Another major advantage is the improved DSP presets for VTX in the Crown I-Tech HD amplifiers that power the system. “The performance of the V25’s and S28’s is simply more even right off the bat—we’re finding that we have to do a lot less system equalizing in general.”

“The V25 delivers surprising volume for its size – I think it’s the best line array out there in this regard,” Leary concluded. “The VTX Series’ capacity to deliver high output over large distances and its ability to be deployed in a variety of configurations made it tremendously versatile for the Lenny Kravitz tour. We achieved better sound than we ever have in every venue and that made Lenny and the rest of us very happy.”