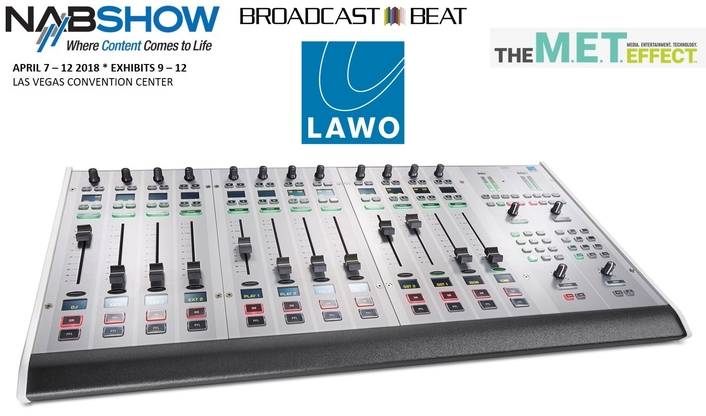 Broadcast Beat, the broadcast technology journalists returning for their third year as the producers and hosts of “NAB Show LIVE”, the official live streaming channel of the NAB, will add something new to NAB 2018: an NAB Show Podcast Studio, built with state-of-the-art Lawo AoIP mixing technology.

“The entire industry knows Broadcast Beat for their excellent, in-depth coverage of the NAB Show and broadcast technology in general,” says Lawo Radio marketing specialist Clark Novak. “So naturally, when we heard they were looking for technology partners for their new NAB Show podcast studio, we jumped at the chance!”

“Lawo sent us a brand-new crystal AoIP broadcast console,” says Ryan Salazar, Broadcast Beat’s Founder and Editor-In-Chief, “along with a state of the art audio DSP platform and RƎLAY Virtual Radio software. This is cutting-edge stuff and we’re very glad to have it as the core of our setup. I think that the broadcasters who will visit and create content at the Podcast Studio this NAB are going to be very impressed with the level of technology at their disposal.”

The NAB Show Podcast Studio will be located in the Central Lobby of the Las Vegas Convention Center, adjacent to the NAB Show LIVE stage. Special guests, industry luminaries and podcast pros will use the studio to create content live during the show; broadcasters can also receive guided tours of the Podcast and NAB Show LIVE studios.

Visitors to NAB2018 are invited to see and hear the entire line of Lawo Radio mixing consoles and Virtual Radio products at the Lawo display, located in the North Hall of the Las Vegas Convention Center in booth # N2813.

Located in Fort Lauderdale, Florida, Broadcast Beat is a next-generation digital publication covering the broadcast, motion picture and post-production industry. The company has separated itself from other publications by building a production facility dedicated to product reviews and “best practice” discussions. Broadcast Beat also features written articles by experienced professionals, giving peer-to-peer insight on technical information that matters most in the design, building & maintenance of broadcast & production facilities.