On the booth cameras will feed the brand new professional plasma monitors from Panasonic
Panasonic broadcast will demonstrate some of the very latest products launched at BVE next year including the now legendary AG-AF101EJ, the compact camera available at a compelling price which is designed to enable production industry professionals to deliver cinema-like footage in HD more simply than ever previously thought possible.

The AG-AF101 4/3 HD camcorder is the world’s first professional HD camera recorder to come equipped with a four-thirds MOS image sensor and is the first model in the Panasonic AVCCAM series to offer the possibility of exchangeable lenses. Optimised for high-definition video recording, the large image sensor on the AF101 enables professional users to achieve cinema-like wide-angle footage with shallow depth of field.

Also on show at the Panasonic stand will be the highly anticipated and now BBC HD approved P2 format AG-HPX250EJ, the first 10 bit hand-held model to feature the AVC-Intra 100 codec.  With progressive-compatible ULT (Ultra Luminance Technology), 1/3-type 2.2-megapixel 3MOS sensor and 22x zoom lens with wide coverage from wide-angle to telephoto the HPX250 looks set to be one of the stars of the show.  Additionally Panasonic will demonstrate its AG-AC130EJ and AG-AC160EJ AVCCAM camcorders.  Both the AC130 and 160 cameras feature a 22x zoom, dual SD cards for relay or simultaneous recording and exceptional low light recording capabilities and deliver the quality and flexibility professional video makers demand.

On the booth cameras will feed the brand new professional plasma monitors from Panasonic including the highly specified and competitively priced BT-300 series. Both the 42” and 50” screens are graded for use in film and TV in 2D and stereoscopic production environments. 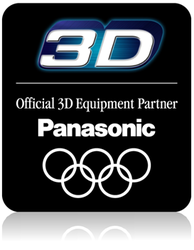 “BVE will provide the platform for us to show off our latest kit and will include demonstrations of the Panasonic broadcast technology that is being used in the London 2012 Olympic Games, such as DVCPROHD, the official recording format for London 2012.” commented UK Marketing Executive, Becky Green.

In addition to everything Panasonic will be doing on it’s stand, official Panasonic distributor, Holdan, will demonstrate on their stand some of the very latest Panasonic products launched at IBC 2011 and shown at BVE North including the recently announced HDC-Z10000, the world's first integrated twin-lens 2D/3D camcorder compatible with the AVCHD 3D / Progressive standard. The new camcorder provides broadcast image quality for 2D and 3D filming, manual control for professional use, auto stereoscopic 3D LCD display and uncompromising audio quality.  Featuring Panasonic’s unique double 3MOS sensor system for recording Full-HD 2D and 3D images, HDC-Z10000 delivers an effective pixel count of 6.57 megapixels for superb colour and detail reproduction.  The two large-diameter F1.5 lenses independently mounted on the left and right are treated with Nano Surface Coating, for the first time on a camcorder, significantly reducing ghosting and flare to produce crisp, clear image rendering.