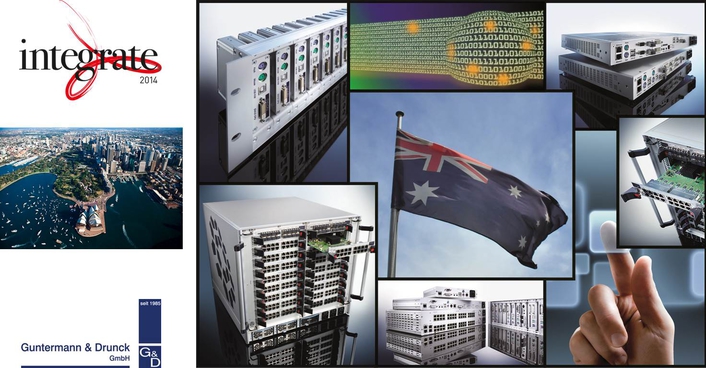 G&D is coming to the land down under
The KVM equipment of Guntermann & Drunck GmbH will soon start its long journey over 16,000 km. Its destination: Down under - the other end of the world. Integrate will be the first time the German products are presented in Australia.

The trade show for event technology, audio and entertainment will be the farthest destination for Guntermann & Drunck’s KVM products. Framed by seminars and workshops, Integrate 2014 will bring together more than 5,000 visitors. With a 22% increase in total visitor numbers in 2013, Integrate will definitely be an exciting event to attend in 2014, too.

KVM from Singapore to Sydney
Only recently, G&D’s latest development, the ControlCenter-Digital-80, has made its first appearance at Broadcast Asia in Singapore. From here, the digital KVM matrix started its journey across the ocean to Sydney.
With 80 dynamic ports, the KVM matrix serves as a digital switch point between computers and users. Whether 1 user accesses 79 computers, 40 users switch to 40 computers or any other constellation – the ControlCenter-Digital is ready to be expanded thousands of ports. Which type of module is connected (computer module or user module) is automatically detected by the matrix. Configuration is kept to a minimum. Thanks to the ControlCenter-Digital’s modularity, it is easy to replace components and flexibly expand the matrix. Its modular setup consists of:
-    Replaceable input and output cards (I/O cards)
-    Switch card including the central switching logic
-    Controller card with the central processor unit
-    Three redundant power packs
-    Two fan boards.

Distances and dimensions according to Australian standardsDistance plays an extremely important role in Australia especially since the continent is almost 22 times larger than Germany. Whenever great dimensions come into play, KVM from G&D is able to bridge distances of several kilometres via optical fibres. Especially the multi-channel variant of DL-Vision KVM extenders knows how to impress when transmitting 4K or Ultra-HD videos in addition to keyboard, mouse RS232 and USB 2.0 signals. Therefore, resolutions up to 3840 x 2160 or 4096 x 2160 pixels are not reduced to 24 or 30 Hz, but provide high-quality images at the full frame rate of 60 Hz and a colour depth of 24 bits.

Leading the way in digital KVM
Integrate Sydney takes place on 26-28 August 2014 at the Showground of Sydney’s Olympic Park. The products of Guntermann & Drunck GmbH are exhibited by their partner KVM Australia at stand D82. Guntermann & Drunck GmbH is regarded as a pioneer in KVM technology. The German manufacturer was already developing and manufacturing KVM solutions before they even had the name. Now G&D offers the market’s most comprehensive KVM portfolio