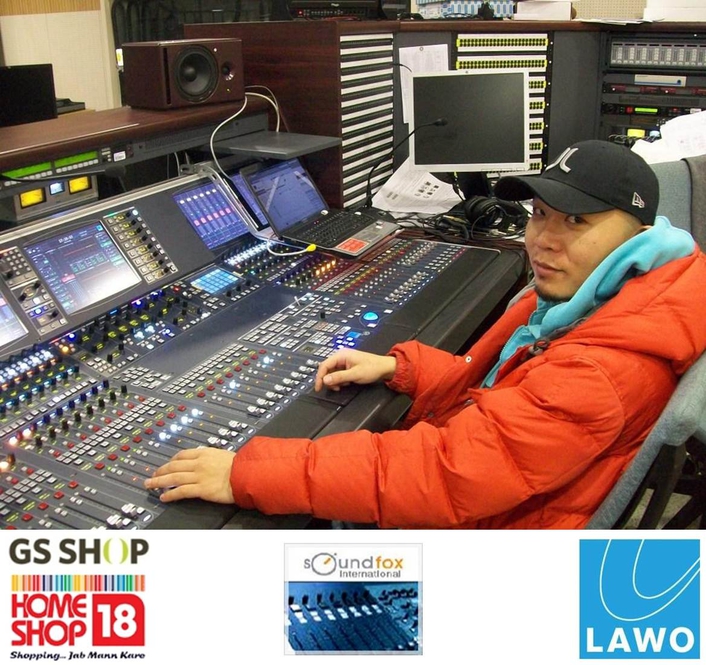 Three mc²66 consoles for GS Home Shopping
Korea’s largest online retailer has completed the second phase of HD conversion of its TV production facilities, specifying Lawo mc²66 digital consoles as standard for its audio mixing requirements. On completion in 2011, the GS Home Shopping channel intends to use its three Lawo systems in a networked configuration.

Since its first broadcast in 1995, GS Home Shopping has offered an advanced form of shopping in which media and retail businesses are integrated, succeeding despite the apparent lack of customer awareness of mail-order in Korea. Today, GS Home Shopping offers 24-hour TV shopping through cable and satellite broadcast, and boasts its own extensive production and studio facilities in Seoul.

GS Home Shopping began the transition to all-HD production in 2008, converting the first of its three control rooms. This was equipped with a Lawo mc²66 digital audio mixer. “We have used this console for almost two years, for 20 hours of daily live production, and we haven’t once had to reboot the system,” says Mr In-huk You, head of the audio engineering team at GS.

With analogue broadcasting due to shut down completely in two years time, GS is now finalising HD conversion in its second control room – installing a Lawo mc²66 console of course, this time the MKII version. Both the Lawo desks have been supplied by Korean distribution agent Soundfox International Co. Ltd. Configured with 16+8+16 faders in a 40-fader frame size, the system offers a 8192x8192 mc² HD core and 128 channels full DSP.

Peter Moh, CEO of Soundfox International, explains that the GS team found the channel display and user interface to be highly intuitive and useful. “GS could also add the functions they wanted to the system, for example customising the GPIO control function, specifying port redundancy on the DALLIS I/O frames, and including 7x HD/SDI embedded/de-embedded audio channels for the video server. In the future, they are intending to construct a network so that I/Os can be shared across all three control rooms.”

Audio engineer team leader Mr In-huk You summarises the GS experience. “Above all, the Lawo mc²66 meets our criteria of stability and sound quality. Our audio engineering team are extremely satisfied with the console’s performance.“