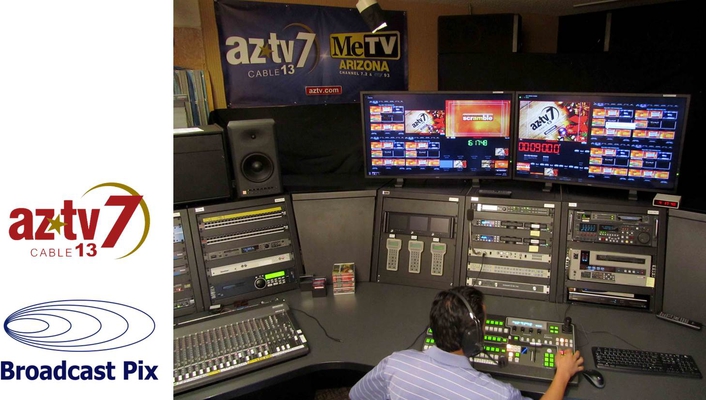 KAZT’s Arnold Corella shows off the station’s updated Prescott control room
KAZT-TV, an independent station serving Arizona’s Phoenix/Prescott market (DMA #11), produces The Morning Scramble, a unique live morning show that produces the first 30 minutes from its Phoenix studio and the last 30 minutes from its Prescott location. In October, the station upgraded both of its facilities to HD production, and anchored both control rooms with Broadcast Pix™ Granite™ X integrated production switchers.

While KAZT had upgraded its master control to HD in 2008, its studios were still producing programming in SD. While planning a move to HD production, station personnel discovered Broadcast Pix at the NAB Show. “The time was right to go HD,” said Brian Cisek, production manager, “but we had not found the right mix of equipment to do it in an economical way with all the bells and whistles we wanted.”

Phil Hammon, chief engineer, handled the integration of the new equipment and the station’s concurrent move to a file-based workflow. He determined that Granite “just seemed to be a lot more ‘live TV’ friendly” than competing systems. “There’s a lot I like about the Broadcast Pix in general,” he added. “From an engineering perspective, redundancy is extremely important – and the Broadcast Pix is one of the better built systems on the market, from its dual power supplies to its fail safe mode.”

Each control room was rebuilt and re-cabled in about 10 days – Phoenix was completed in mid-October and Prescott two weeks later. (During installation, The Morning Scramble was produced in only one city.) For the HD upgrade, the station purchased the same equipment for both control rooms. The Broadcast Pix systems were purchased through BKW, Inc., a value added reseller based in Tempe, Ariz. Additional upgrades included new JVC ProHD studio cameras, AJA Ki Pro record decks, 40-inch NEC LCD monitors for the control room video walls. The station is owned by Londen Media Group, LLC.

Designed for large-scale productions, Granite X supports 22 inputs and seven channels of files, and can integrate cloud-based content from Skype, Twitter, and other online sources during a live production. The Granites replaced an aging Ross analog switcher in Prescott and a Ross digital switcher in Phoenix. “File sharing at some point became a little difficult,” Cisek recalled. “Now, everything is consistent – they almost work as one studio. It’s just seamless.”

Using the built-in Watch Folders content management system, KAZT can transfer media from edit suites and other sources directly to the Granite before or during a production. “It’s really easy the way it just shows up and you just pull it into your show,” Cisek explained.

Fluent-View, Granite’s built-in customizable multi-view, was one of the system’s biggest selling points for the KAZT production team. The station produces The Morning Scramble and a weekly political program in Phoenix, and each series has a unique multi-view setup that can be tailored for individual technical directors. “That was the ‘wow’ factor,” Cisek said. “The flexibility of that was just awesome.”

The station welcomes outside production clients, but with SD studios, too many potential clients were going elsewhere. Now, Cisek said the station is starting to build a client base. “We knew that there was revenue to be made with our HD studio,” he said.Hammon and Cisek are very happy with KAZT’s HD upgrade, particularly the Granites. “In a lot of ways, we’ve only cracked the surface of what the system can do – and that represents what maxed out our old system,” Cisek added. “Overall, we really enjoy the system. It’s going to give us a lot more flexibility.”