K-Tek on the NASCAR Road with Sound Mixer McQueen

.
Sound Mixer Mike McQueen is always on the road, covering everything from corporate and commercial work to reality and sports. With a special pension for action/adventure, he really puts his K-Tek boom poles to the test for NASCAR.

“We started in Dover and from there it went all over the country,” he explains. “During the week we would visit the race team shop, follow the driver to some personal and team events. Then we’d head to the next track, sometimes on either the teams or driver’s jet. We attended races at Dover, Pocono, Michigan, Sonoma, Kentucky, Daytona, and finished our coverage going to New Hampshire. With most of the race shops around Charlotte, NC, we found ourselves in that area quite a bit too.”

The challenges for McQueen, audio-wise, were many and unusual. The teams and drivers were very protective of their technology and “not to mention, they didn’t enjoy having mics hovering over them all the time,” he explains. “It took a lot of knowing when and when not to throw the boom in. There were times when lavs could be used but boom work was very prominent on this show. Other than that it was, long days, lots of time on my feet carrying a bag over my shoulders and dealing with the weather. All the fun stuff that comes with making TV!”

The least of McQueen’s worries were his boom poles. He’s trusted K-Tek since he started in the business. “My first boom ever was a K-Tek, one of the aluminum ones,” he says. “I liked their design so when it came to upgrading I picked up two Klassic Boom Poles (152CC and 102CC). These five-section poles are lightweight, thoughtfully designed, and sturdy. The fact that I can go from the shortest range of 1’ 4” to the full extension of nearly 21’ is a plus. I don’t have to put one down and pick up and set up another. The ease and speed at which I could extend the booms on the NASCAR project made my job a lot easier when it was GO time.” 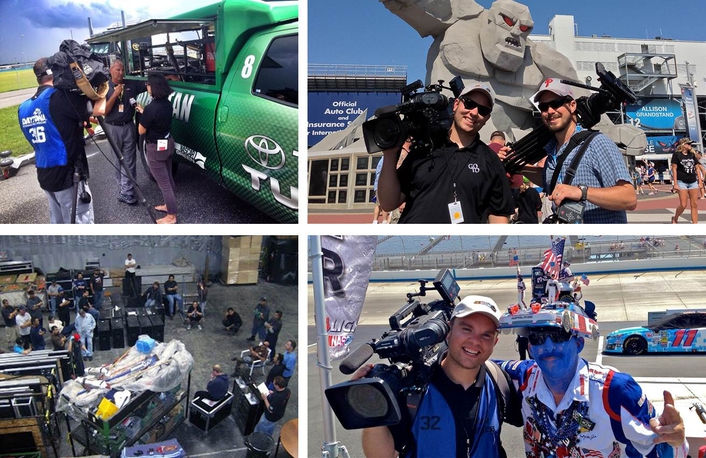 He also gives high marks to his K-Tek Stingray Audio Bag. Purpose-designed for the new generation Sound Devices 633 and the Zaxcom Maxx, he said they provide just enough space for all his audio equipment, without being bulky.

“One thing that’s been a huge benefit to me is the openness to the sides and bottom of the bag, so I can quickly get in there and deal with cable routing. It’s much preferable to having to empty the bag to cable up an additional wireless mic receiver.”The NASCAR “All Access” project aired during the TNT Summer series and is now being seen on NASCAR.com