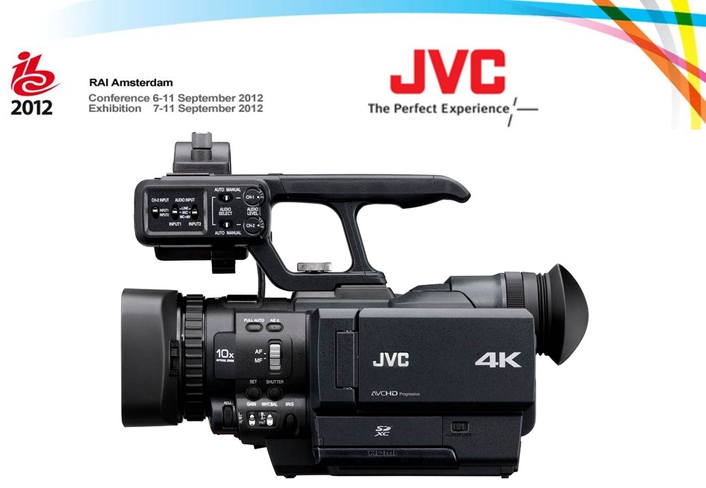 4K CamCorder, new WiFi/FTP camcorder with dual codecs and expanded professional monitor range
JVC was heavily focussed on its professional camera and monitor range at this year’s IBC event, and particularly on how these integrate into production and broadcast workflows. The latest innovations from the company include the new GY-HM600 and GY-HM650 camcorders, a GY-HMQ10 handheld 2K/4K camcorder, along with technology previews of a 17” RGB LED monitor and a prototype 4K monitor.

Shown earlier in the year at NAB and now demonstrated as working models at IBC, the new ProHD ENG cameras from JVC can shoot and deliver news footage faster than ever. These two advanced handheld cameras deliver exceptional imagery and features for news, sports, and independent production in an attractive form factor with intuitive user-friendly controls. 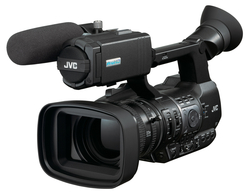 The lightweight camera records HD or SD footage in multiple file formats, including native XDCAM EX™ (.MP4), Final Cut Pro™ (.MOV), AVCHD and H.264, to non-proprietary SDHC or SDXC media cards. In addition to relay mode for uninterrupted recording, the GY-HM600 allows simultaneous recording to both memory cards for instant backup or client copy. It is the perfect tool for VJs and for news/media coverage. 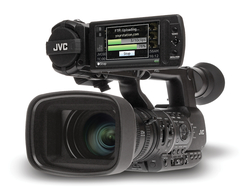 GY-HM650 camcorder
Designed specifically for professional ENG applications, where fast recording in formats suitable for broadcasting is essential, the GY-HM650 ProHD handheld mobile news camera can shoot and deliver news footage faster than ever. Equipped with dual codecs, it produces full HD files on one memory card while simultaneously creating smaller, web-friendly files (1/4 HD or SD) on a second card. With built-in FTP and Wi-Fi connectivity, the GY-HM650 delivers the footage back to a station without a microwave or satellite connection, ideal for breaking an important story as soon as it happens.

The GY-HM650 not only supports MPEG-2, AVCHD and H.264 formats, but also the MXF AS10 format. An integrated web server provides a variety of functions, from camera control to editing of the metadata, via any browser-enabled device, such as a tablet or mobile phone. 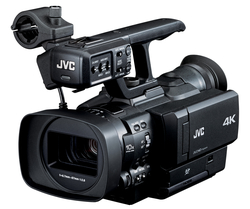 GY-HMQ10 2K/4K camcorder
JVC will also be demonstrating the world’s first handheld 2K/4K camcorder, the GY-HMQ10. It captures, records and plays video images at four times the resolution of high definition television. Powered by JVC’s Falconbrid large-scale integration (LSI) chip for high-speed signal processing and a 1/2-inch CMOS imager with 8.3 million active pixels, the camcorder delivers real-time 3840x2160 footage at 24p and 50p. Using MPEG-4 technology and a variable bit rate H.264 codec operating at up to 144 Mbps, it’s possible to record up to two hours of 4K video to economical SDHC or SDXC memory cards. To display the camera’s performance at IBC, the GY-HMQ10 will be connected via the KM-H3000 digital production switcher to an Apple iMac system, demonstrating how creative you can be using 4K material as part of a full HD project. There will also be an area on the IBC stand to show our studio solutions with the GY-HM790 fibre camera system, camera controllers and KM-H3000 digital production switcher.

New production monitor models, including RGB technology and a 4K technology preview
JVC remains a leader in full HD flat-panel displays, and is continuing to break new ground with its expanding product lines, delivering everything from high-end reference level monitors to affordable portable displays. A new 17" full HD RGB 10-bit panel - the DT-V17G15 - was launched at IBC to add to the professional DT-V Series. 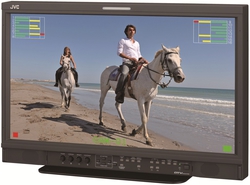 Other new models on display in the IBC monitor wall include the DT-E15L4G 15” monitor, updated 9” models (DT-V9L5 and DT-F9L5), the DT-X series of portable 7” field monitors and two new 55” large format monitors (GM-552D/GM-552DE). There will also be a prototype of a new JVC 4K 32-inch monitor on display at the show. Consistent design, exceptional images and high build quality are just some of the reasons why JVC monitors have remained industry leading, and with these new IBC models, JVC continues to deliver affordable technological innovations for professional video. 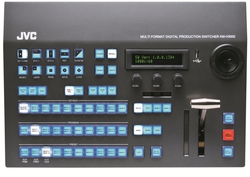 Compact studio featuring LightCube playout and archiving system
The broadcast studio was another area of focus for JVC at IBC, and the products on show in this area demonstrate the most important aspects of the production and broadcasting process. LightCube SD/HD, from TWT, is the first playout solution designed by broadcasters, offering full workflow in a single workstation. From ingest through to broadcast, LightCube enables you to take control of your media, with simultaneous capture and playout. Features includes comprehensive asset management, quiet PC-based storage, CG management, playlists, playout, and a high-level audio processor to control any source audio problems. There’s full manual and automatic control of the matrix/router, and the software is available in multi-language versions with the option to upgrade to the larger WonderCube platform as needs require. In addition, this area of the stand will feature the three JVC camera control units for the studio camera system, along with the professional SR-HD2500 Blu-ray and HDD recorder, and KM-H3000 digital production switcher.