Tilburg School of Journalism is equipping students with HD broadcast and production skills
Long gone are the days of a keen reporter armed with nothing but a notebook in search of a great story. In order to secure a job in the media today, journalists need to be able to capture, edit, produce and in some cases, broadcast their own stories, without relying on a production team. And with editorial teams shrinking, whilst the volume and velocity of news production conversely increase, learning on the job simply isn’t an option. Therefore selecting the right education is critical, in order to get the practical skills and access to the latest broadcast technology required to stand out from the crowd.

Fontys Hogeschool Journalistiek (FHJ), a journalism school based in Tilburg in the Netherlands has taken this as the foundation for its curriculum, ensuring that from the outset, its 943 students are aware of not only how to write a good story, but how to produce it with the latest broadcast technology.

“We’ve always had studio and video production facilities available for our students, but previously it was for use in the final years of study, once a student had decided to specialize in broadcast journalism,” explains Jan van den Heuvel, studio manager, FHJ. “We also thought it was a real shame that students saw a beautiful studio with great equipment when they visited or in the prospectus, but then couldn’t actually get their hands on it until the end of their studies.”

Content production at the heart of the syllabus
From the very beginning of their studies, students produce their own video reports, starting with smartphone videos in Year 1 and progressing to more professional camera equipment in their final year. “Our students travel all over the world to produce their news reports, so we get a really diverse program schedule,” Jan continues.

The footage is edited by the students on iMacs and then compiled to produce a weekly show in the school’s HD studio facilities, which have been upgraded from equipment that was installed 12 years ago. 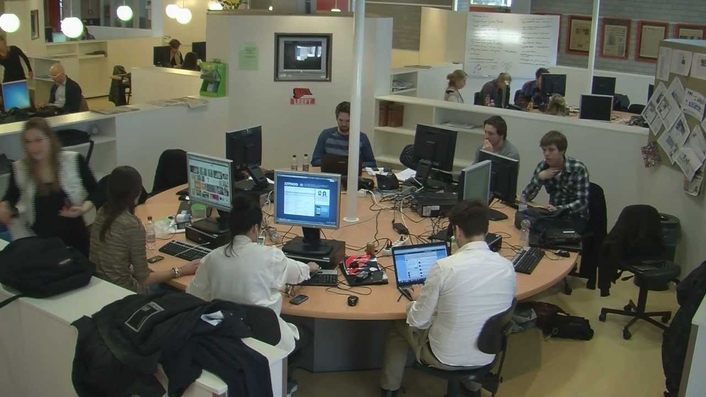 The studio is based in a former gymnasium in the University. The production workflow is built around Blackmagic Design’s ATEM 2 M/E Production Studio, which is controlled by an ATEM 1 M/E Broadcast Panel, which immediately helps students understand how to use technical broadcast equipment. A Compact VideoHub is in place as a routing solution, together with over 100m of fibre cable connection and several Mini Converters SD-HDMI and Open Gear converters between the cameras on the studio floor and the switcher. Using the ATEM 2 M/E Production Switcher’s 16 inputs, students can switch between a variety of content, including studio footage from three fixed cameras filming two student presenters, as well as the various news reports, with the ability to add graphics and captions and picture in picture production with the ATEM’s SuperSource feature.

Live production is also an important element. As well as the show framing the students’ content, students also produced a live debate during last year’s national elections, with MPs taking part in a live discussion in the school’s auditorium. “We had to rely on rented equipment to support this project, but the new studio equipment means that students will now have the ability to produce special live broadcasts in HD, which will further enhance their production skills,” explains Jan.

The show is broadcast in HD internally in the school to a big screen in the school’s auditorium and monitors in the school reception and in every classroom. There are plans to stream the content in the very near future.

Inhouse expertise from technical specialists
The studio team is made up of industry experts; Jan is a cameraman by profession, and his colleagues have worked in editing and post production facilities, so students get first hand tips and tricks. “It doesn’t matter whether you want to work in lifestyle publications, or in a breaking news environment; the ability to produce high quality, professional video content is now essential for budding journalists,” said Jan. “The Blackmagic products we have in the studio, mean that we’re able to replicate the studio environment for news and TV production, but we can also help them understand how to broadcast their news using other channels, so no matter how they want to tell their story, they’ve been given the tools and the skills to start broadcasting their content immediately.”

“The ATEM 2 M/E Production Studio is a really straightforward piece of equipment that allows you to do a huge amount of different things, thanks to its feature sets, so it’s a perfect fit for our students,” concluded Jan. “We are very committed to providing the most well rounded education we possibly can, because we know that the media market today is so competitive. The studio, and the weekly show, enables students to get as close to a real life studio environment as we can possibly produce, including exposing them to HD broadcast quality, to make sure they have that extra edge that will help them become a standout candidate.”