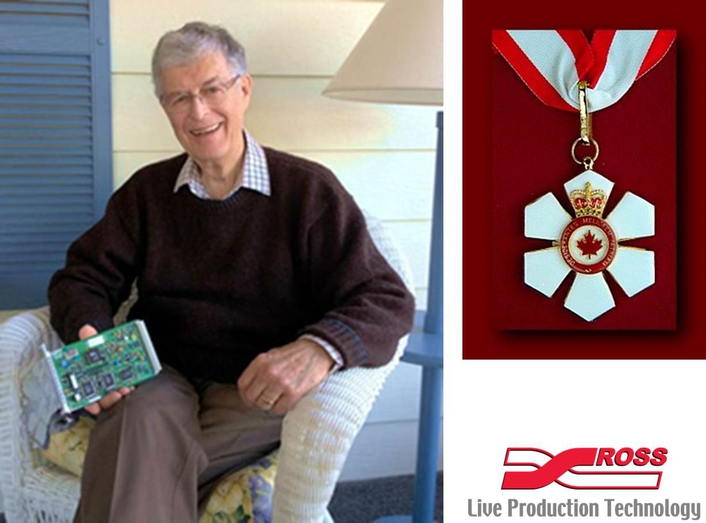 .
Ross Video’s founder, John Ross has been awarded the Order of Canada, the highest honour a Canadian Citizen can receive as announced by the Governor General on December 30, 2012.

Nominated for his contributions as a technology innovator, developing products at the forefront of broadcast engineering, John Ross will accept his insignia at a ceremony to be held at a later date.

“My fascination with engineering began with an electronics book I discovered at the age eight,” said John Ross, Founder of Ross Video. “By the time I was twelve years old, I was designing small transmitters. This led to my first job at age fourteen at CKY-FM in Winnipeg, Manitoba, where I became the transmitter operator for the summer.”

In January 1954, the CBC hired John to be part of the initial staff of CBWT. At CBWT John was the youngest member of the pioneering “start-up” crew of the first TV Station between Toronto and Vancouver.

“I was intrigued by the visual electronic effects used on the Jackie Gleason Show play on Kinescope Film recordings,” continued John. “Because there was a lot of waiting time at the CBC, I sketched waveforms and circuits that might be used to created wipe patterns. Eventually I thought it was time to test my theories, so at home in my bedroom workshop, I built a crude Special Effect Amplifier and took it to work. One of the production staff saw it, and it was connected up in Studio 41 and used on the suppertime program “Spotlight” that evening. Later on I was allowed to design and build a better special effects system – provided it was on my own time. After all, I was paid to operate the equipment – not invent it!”

During his employment at the CBC, Ross designed a transistorized wireless microphone adapter to be worn on a belt, and the first colour TV in Canada to receive colour pictures from Canadian Transmitter (CBWT in 1956). After completing his university education in Engineering, John went on to design what is described as the first solid-state TV production switcher and he was awarded a chroma key patent that led to the use of the green screen. John also obtained a contract for the development of the first automated solid-state Master Control Switcher, plus co-designed and built the first successful all-electronic tape editing system in the world.

In 1974, John founded Ross Video, based out of Iroquois, Ontario, and retired from the company in 2005, handing the company over to his son David who now serves as President, CEO and Chairman of the Board.

About the Order of Canada
Established in 1967 by Her Majesty Queen Elizabeth II, the Order of Canada is the centerpiece of Canada’s Honours System and recognizes a lifetime of outstanding achievement, dedication to the community and service to the nation.