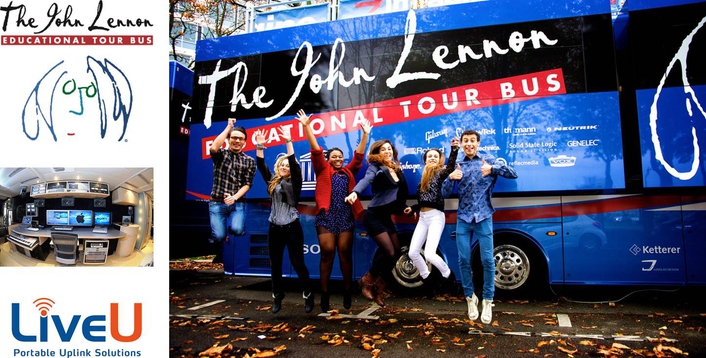 .
LiveU, a leader in portable live video-over- cellular solutions, has announced support for the non-profit John Lennon Educational Tour Bus and its original live stream productions known as @lennonbus. The shows are being streamed live using LiveU’s beltclip LU40-S cellular transmission technology as well as its backpack LU70 to deliver live content to a wide audience.

The John Lennon Educational Tour Bus is a professional audio and HD video recording and production facility. Plans for Lennon Bus Europe have been evolving since the first U.S. Lennon Bus hit the road in 1998 with a mission to provide young people with access to state-of-the-art production studios. Staffed by a crew of three producer/engineers, the Bus is dedicated to providing the young people of Europe with free hands-on opportunities to produce original music, video, photo, game app and broadcast projects reflective of their ideas, values, and creativity. 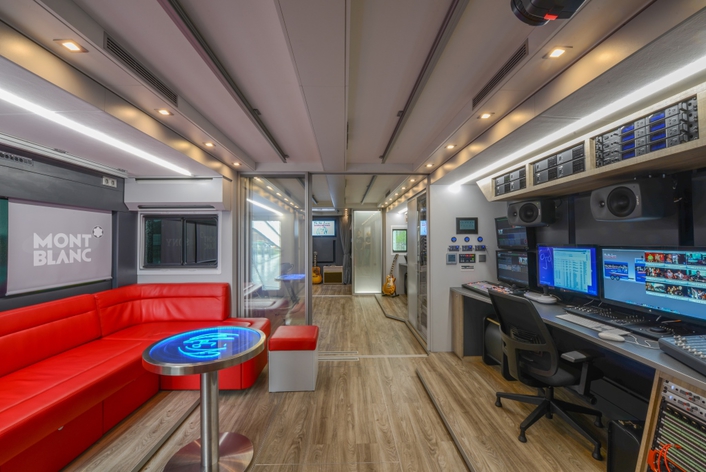 The John Lennon Bus turned to LiveU in order to broaden its streaming possibilities. Jeff Sobel, Chief Engineer, with the John Lennon Bus, said, “In the United States our bus is equipped with a roof-mounted satellite dish. While the dish is excellent technology, we found that we frequently wanted to produce live streams from locations away from the bus -- outdoor concerts, events inside schools or conferences, or moving from location to location. LiveU allows us to live stream from more locations, and cover different types of events than we have had open to us before.”

The technology has already been used to present live streams featuring Yoko Ono and recording artist Adel Tawil in Berlin, as well as a series of music education forums in association with the NAMM Foundation.

Sobel said, “We’re working more and more with LiveU and we’re very pleased with the events that we’ve produced with the technology. Anyone interested in new music, video production, or learning new ways to be creative and inspired will want to tune in to the John Lennon Bus’ live streams and we’re looking forward to expanding our usage.”

The streams are available at www.facebook.com/lennonbus with the schedule available at http://europe.lennonbus.org.The technology has been supplied by LiveU’s German partner Netorium.

Ronen Artman, LiveU’s VP Marketing, said, “It’s a genuine pleasure to be involved in such an inspiring and philanthropic venture. Our technology is designed to provide mobility and ease of deployment which we’re pleased to see the John Lennon Bus taking advantage of. We hope that it helps inspire creativity across the U.S. and Europe.”

About The John Lennon Educational Tour Bus
The John Lennon Educational Tour Bus is a non-profit state-of-the-art mobile Pro Audio and HD video recording facility that provides hands-on experiences for students of all ages. In its 16th year of touring, the Lennon Bus features the latest audio and video technology, gear and products
Lennon Buses in the U.S. and Europe  travel throughout the year, providing free experiences and workshops at schools, retailers, festivals, on tours with headlining artists, and at major industry conferences.

The John Lennon Educational Tour Bus is made possible by an agreement with Yoko Ono Lennon.

The John Lennon Education...ad in the U.S. and Europe
Neutrik® Celebrates the ...al Tour Bus in Liverpool
Sony set to support The J...nnon Educational Tour Bus