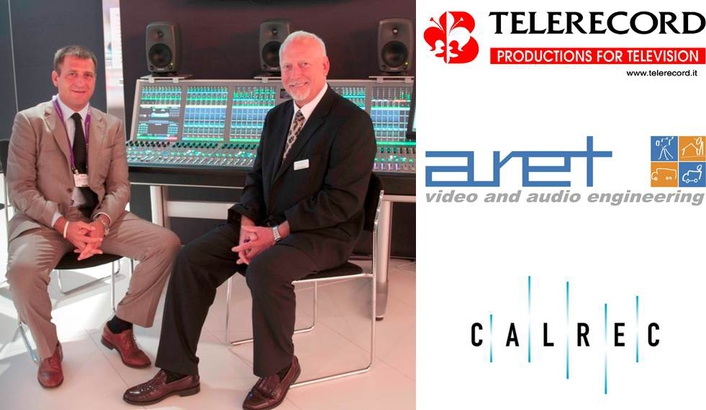 Calrec Console Chosen For HD OB Truck: Alessandro Asti of Calrec’s Italian distributors Aret with Chas Rowden of Calrec
Italian Outside Broadcast facilities company Telerecord has agreed the sale of a Calrec Artemis console for use in one of their HD OB vehicles. Delivery of the console took place in Autumn 2011.

One of Italy's most successful private OB facilities providers, Telerecord SRL, has agreed the purchase of a Calrec Artemis console for use in one of its OB vehicles.

Founded in 1976, Telerecord was the first OB company in Italy to use digital transmission equipment and the first to offer the ability to transmit in High Definition (2004) and 3D (2007). The Calrec Artemis console is being bought for one of Telerecord's larger multi-camera high-definition OB trailers.

The sale of the Artemis was agreed in August. According to Alessandro Asti of Calrec's Italian distributor Aret, delivery of the console took place in Autumn 2011, while the truck was due to enter service before the end of 2011.

About Calrec Audio
Calrec Audio, part of D&M Holdings Inc., is exclusively dedicated to excellence in audio mixing for on-air and live production. A broadcast specialist for more than 35 years, Calrec has developed a range of digital and analog consoles relied on by the world's most successful broadcasters. For putting sound in the picture, broadcasters put their trust in Calrec.