Introducing M1 Pro and M1 Max: the most powerful chips Apple has ever built 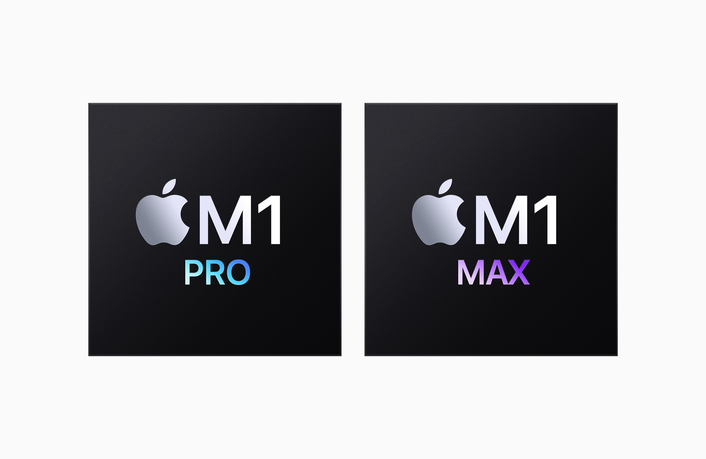 Apple today announced M1 Pro and M1 Max, the next breakthrough chips for the Mac. Scaling up M1’s transformational architecture, M1 Pro offers amazing performance with industry-leading power efficiency, while M1 Max takes these capabilities to new heights. The CPU in M1 Pro and M1 Max delivers up to 70 percent faster CPU performance than M1, so tasks like compiling projects in Xcode are faster than ever. The GPU in M1 Pro is up to 2x faster than M1, while M1 Max is up to an astonishing 4x faster than M1, allowing pro users to fly through the most demanding graphics workflows.

M1 Pro and M1 Max introduce a system-on-a-chip (SoC) architecture to pro systems for the first time. The chips feature fast unified memory, industry-leading performance per watt, and incredible power efficiency, along with increased memory bandwidth and capacity. M1 Pro offers up to 200GB/s of memory bandwidth with support for up to 32GB of unified memory. M1 Max delivers up to 400GB/s of memory bandwidth — 2x that of M1 Pro and nearly 6x that of M1 — and support for up to 64GB of unified memory. And while the latest PC laptops top out at 16GB of graphics memory, having this huge amount of memory enables graphics-intensive workflows previously unimaginable on a notebook. The efficient architecture of M1 Pro and M1 Max means they deliver the same level of performance whether MacBook Pro is plugged in or using the battery. M1 Pro and M1 Max also feature enhanced media engines with dedicated ProRes accelerators specifically for pro video processing. M1 Pro and M1 Max are by far the most powerful chips Apple has ever built.

“M1 has transformed our most popular systems with incredible performance, custom technologies, and industry-leading power efficiency. No one has ever applied a system-on-a-chip design to a pro system until today with M1 Pro and M1 Max,” said Johny Srouji, Apple’s senior vice president of Hardware Technologies. “With massive gains in CPU and GPU performance, up to six times the memory bandwidth, a new media engine with ProRes accelerators, and other advanced technologies, M1 Pro and M1 Max take Apple silicon even further, and are unlike anything else in a pro notebook.” 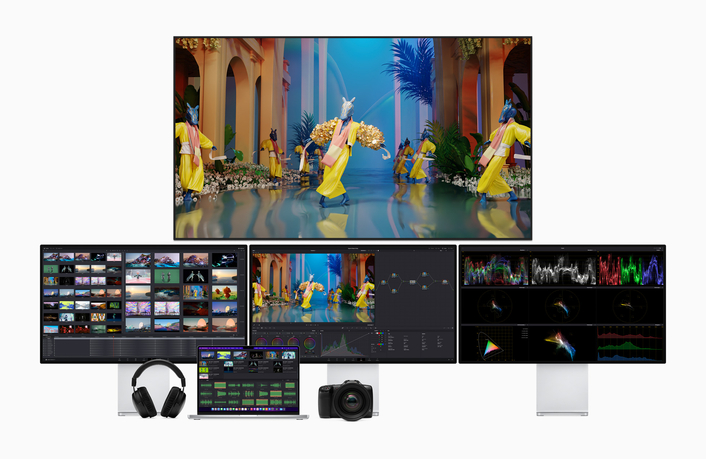 M1 Pro: A Whole New Level of Performance and Capability

Utilizing the industry-leading 5-nanometer process technology, M1 Pro packs in 33.7 billion transistors, more than 2x the amount in M1. A new 10-core CPU, including eight high-performance cores and two high-efficiency cores, is up to 70 percent faster than M1, resulting in unbelievable pro CPU performance. Compared with the latest 8-core PC laptop chip, M1 Pro delivers up to 1.7x more CPU performance at the same power level and achieves the PC chip’s peak performance using up to 70 percent less power.1 Even the most demanding tasks, like high-resolution photo editing, are handled with ease by M1 Pro.

M1 Pro has an up-to-16-core GPU that is up to 2x faster than M1 and up to 7x faster than the integrated graphics on the latest 8-core PC laptop chip.1 Compared to a powerful discrete GPU for PC notebooks, M1 Pro delivers more performance while using up to 70 percent less power.2 And M1 Pro can be configured with up to 32GB of fast unified memory, with up to 200GB/s of memory bandwidth, enabling creatives like 3D artists and game developers to do more on the go than ever before. 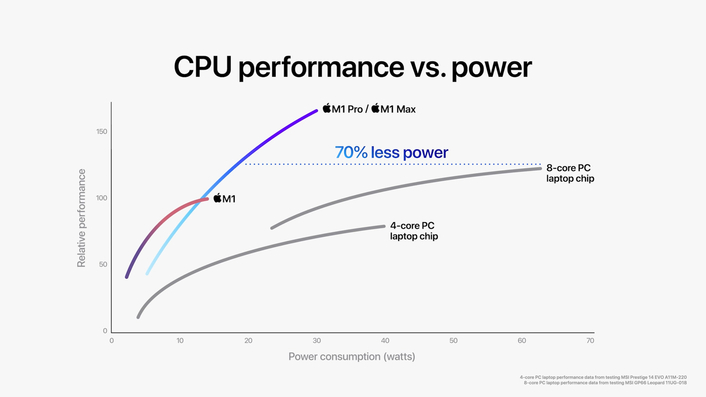 M1 Pro and M1 Max feature an up-to-10-core CPU that is up to 1.7x faster than the latest 8-core PC laptop chip at the same power level, and achieves the PC chip’s peak performance at up to 70 percent less power.

M1 Max: The World’s Most Powerful Chip for a Pro Notebook

M1 Max features the same powerful 10-core CPU as M1 Pro and adds a massive 32-core GPU for up to 4x faster graphics performance than M1. With 57 billion transistors — 70 percent more than M1 Pro and 3.5x more than M1 — M1 Max is the largest chip Apple has ever built. In addition, the GPU delivers performance comparable to a high-end GPU in a compact pro PC laptop while consuming up to 40 percent less power, and performance similar to that of the highest-end GPU in the largest PC laptops while using up to 100 watts less power.2 This means less heat is generated, fans run quietly and less often, and battery life is amazing in the new MacBook Pro. M1 Max transforms graphics-intensive workflows, including up to 13x faster complex timeline rendering in Final Cut Pro compared to the previous-generation 13-inch MacBook Pro.

M1 Max also offers a higher-bandwidth on-chip fabric, and doubles the memory interface compared with M1 Pro for up to 400GB/s, or nearly 6x the memory bandwidth of M1. This allows M1 Max to be configured with up to 64GB of fast unified memory. With its unparalleled performance, M1 Max is the most powerful chip ever built for a pro notebook. 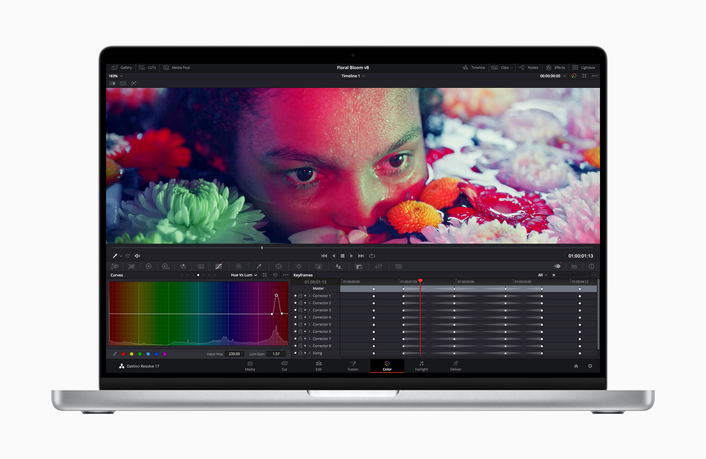 Both M1 Pro and M1 Max are loaded with advanced custom technologies that help push pro workflows to the next level:

The Mac is now one year into its two-year transition to Apple silicon.

A Huge Step in the Transition to Apple Silicon

The Mac is now one year into its two-year transition to Apple silicon, and M1 Pro and M1 Max represent another huge step forward. These are the most powerful and capable chips Apple has ever created, and together with M1, they form a family of chips that lead the industry in performance, custom technologies, and power efficiency.

macOS Monterey is engineered to unleash the power of M1 Pro and M1 Max, delivering breakthrough performance, phenomenal pro capabilities, and incredible battery life. By designing Monterey for Apple silicon, the Mac wakes instantly from sleep, and the entire system is fast and incredibly responsive. Developer technologies like Metal let apps take full advantage of the new chips, and optimizations in Core ML utilize the powerful Neural Engine so machine learning models can run even faster. Pro app workload data is used to help optimize how macOS assigns multi-threaded tasks to the CPU cores for maximum performance, and advanced power management features intelligently allocate tasks between the performance and efficiency cores for both incredible speed and battery life. 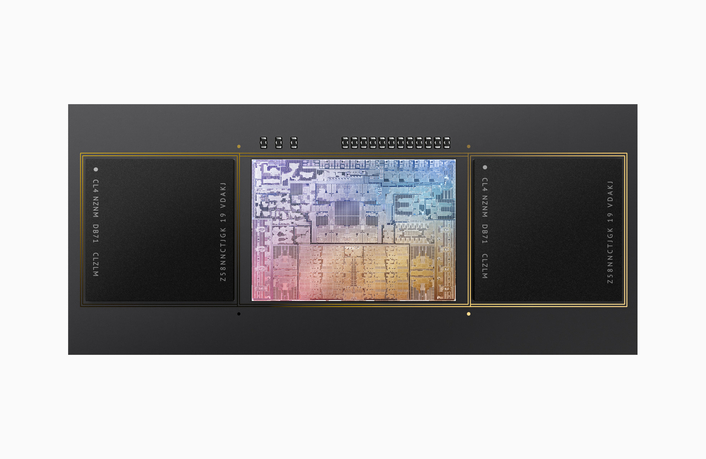 M1 Pro features 33.7 billion transistors — more than 2x the amount in M1. The chip can be configured with up to 32GB of fast unified memory.

The combination of macOS with M1, M1 Pro, or M1 Max also delivers industry-leading security protections, including hardware-verified secure boot, runtime anti-exploitation technologies, and fast, in-line encryption for files. All of Apple’s Mac apps are optimized for — and run natively on — Apple silicon, and there are over 10,000 Universal apps and plug-ins available. Existing Mac apps that have not yet been updated to Universal will run seamlessly with Apple’s Rosetta 2 technology, and users can also run iPhone and iPad apps directly on the Mac, opening a huge new universe of possibilities.

Apple’s Commitment to the Environment

Today, Apple is carbon neutral for global corporate operations, and by 2030, plans to have net-zero climate impact across the entire business, which includes manufacturing supply chains and all product life cycles. This also means that every chip Apple creates, from design to manufacturing, will be 100 percent carbon neutral.

Apple revolutionized personal technology with the introduction of the Macintosh in 1984. Today, Apple leads the world in innovation with iPhone, iPad, Mac, Apple Watch, and Apple TV. Apple’s five software platforms — iOS, iPadOS, macOS, watchOS, and tvOS — provide seamless experiences across all Apple devices and empower people with breakthrough services including the App Store, Apple Music, Apple Pay, and iCloud. Apple’s more than 100,000 employees are dedicated to making the best products on earth, and to leaving the world better than we found it.