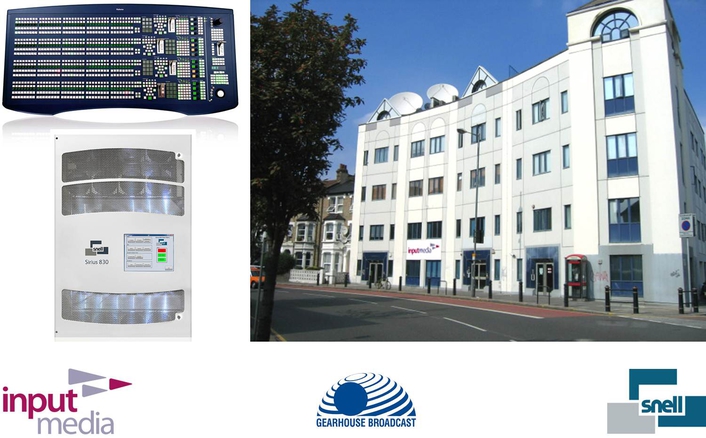 "We became the first U.K. production facility to implement the Kahuna 360 because we very quickly realized the agility the new system could bring to our business," said Nick Symes, director of technology at Input Media. "The combination of Snell's Kahuna 360 and Sirius 830 systems, supported by Snell's control and monitoring and IQ Modular infrastructure, has facilitated a next-generation expansion of our live production capabilities and enables us to grow our business intelligently."

Multiple galleries or studios run from a single Kahuna 360 mainframe, and the system's versatility allows Input Media to take on a variety of job types with differing resource requirements. The resources in the Input Media system can be allocated as required and run multiple concurrent jobs with varying requirements. Delivery of everything from sports rebranding and turnaround, to Superfeed programs, studio-based programs, and even a major tournament final program show is possible. The advantage of this installation is the ease and speed with which Kahuna 360 can be adapted to any job, thereby improving engineering workflows and time spent on setup and cabling of studio galleries.

The 15-RU Sirius 830 multi-format hybrid router features high-performance modules for flexible and cost-effective routing of SD, HD, ASI, and 3Gbps signals. Embedded audio and AES/MADI processing modules with AHP facilitate embedded audio routing, audio track swapping, and processing on all inputs and outputs. This allows Input Media to route any combination of embedded, discrete AES, and MADI signals, without compromise. With the means to reconfigure its facility quickly and easily, Input Media can turn from one job to the next almost immediately and thereby maximize use of its facility and resources.

The Snell equipment was taken live earlier this month for production of The Football Association Challenge Cup (The FA Cup), launched in 1871-72 and now known as the world's first soccer cup competition.

About Input Media
For 25 years, Input Media has been out in front producing top-quality programming and using cutting-edge technology to deliver flexible broadcast solutions for some of the world's biggest sports federations, broadcasters, and football clubs. The company's list of blue-chip clients includes UEFA, The Football Association, the French Tennis Federation, BBC Sport, ITV Sport, ESPN, the Women's Tennis Federation, and Chelsea FC.