Jake Speer as the actor in the production titled "Shifted".

Looking back at 2020, this has been a year of many ups and downs, with companies undergoing radical transformations from facilitating physical events to adopting pioneering technologies used for remote productions, virtual set ups and generally tapping into the world of virtual production. For Spectre Studios, however, virtual production (VP) is not a new field. The company was already using real-time engines and virtual production technologies for their work on Hollywood blockbusters and, last year, set up ICVFX full-service LED VP studio in conjunction with Big Picture, part of the NEP Worldwide Network, using top-quality equipment at the facility which includes Brompton Tessera LED processing power to drive ROE LED panels.

The climactic moment for Spectre, however, was in November, when the company participated in Epic Games’ coveted Unreal Build: Virtual Production event, where a small number of creative studios across the world were invited to showcase their next-generation tools and techniques which are set to transform filmmaking industry. Brompton Tessera SX40 4K LED processing was used for the video piece that Spectre showed at the event.

“Unreal Build: Virtual Production was a free half-day virtual event that showcased projects and innovations from film and television industry trailblazers,” says Spectre Studios’ Technical Director, Rick Pearce. “We were invited to submit some of our early work to be included into a sizzle reel they were putting together to highlight some of the great work being done globally.”

Offering a glimpse of what the future might hold for creative content production, Pearce and his team at Spectre used a 14m by 4.8m LED wall made up of Black Onyx 2.8mm panels, as well as 4m by 4m ceiling using 5mm screens and two LED side screens 3m by 3m each. “Like with majority of our projects, we used Brompton’s cutting-edge 4K Tessera SX40 LED processing system to drive our set up, which gives us a headache-free production workflow every time,” adds Pearce.

The showcase was an opportunity to share all the advantages of virtual production across the whole product life cycle, giving studio executives a chance to share the benefits of using VP and what they see as key strengths for the technology in the future. 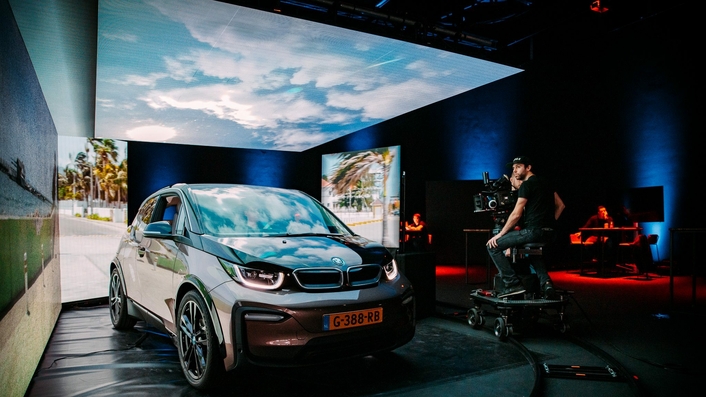 “Working with NEP and Big Picture has allowed us to understand the benefits of using tier one equipment for the ideas we want to execute. They are the experts when it comes to what works best to achieve the quality and speed we need and the decision is easy when Brompton Tessera processing is an option,” explains Pearce.

Tessera processor’s colour control and image manipulation features are particularly useful when it comes to virtual production, according to Pearce. “We find the Tessera SX40 to be the industry leader when it comes to reliable LED processing solution, with functions like the OSCA seam correction and ChromaTune colour correction tools being invaluable to us. The same goes for the advanced remote software control option which adds fluidity to our workflow, which is especially useful in the current climate,” he adds.

Pearce further describes how much it meant for them as a company to be part of the showcase. “We believe in what we are doing, and we know these tools will allow filmmakers to collaborate better and hopefully usher in a new way of creating projects, both from a practical standpoint with efficiencies in production, but also in terms of how different heads of departments interact with each other, and the additional thought that needs to be put into how post-production is considered during production,” he says.

Pearce notes that virtual production technology is not an entirely new tool to their industry, as they have been using variations of computer-aided production for decades.

“What excites us about this space is the merging of game engine technology, film production, and cutting-edge hardware improvements which have removed a lot of barriers. Real-time Virtual Production used to be something only large, well-funded studios had access to,” he concludes. “Now, UE4 has democratized that and the speed in which development gets done means, as a creator, you are always finding new and cool ways to do things you didn’t believe were possible.

“We feel confident that with our knowledge and expertise, as well as working with leading industry partners such as Big Picture that supply future-proof products that we can rely on and trust, like Brompton’s Tessera processing, we are able to facilitate whatever challenge our clients throw at us and whatever new technological innovations come our way in the new year. Bring on 2021!”