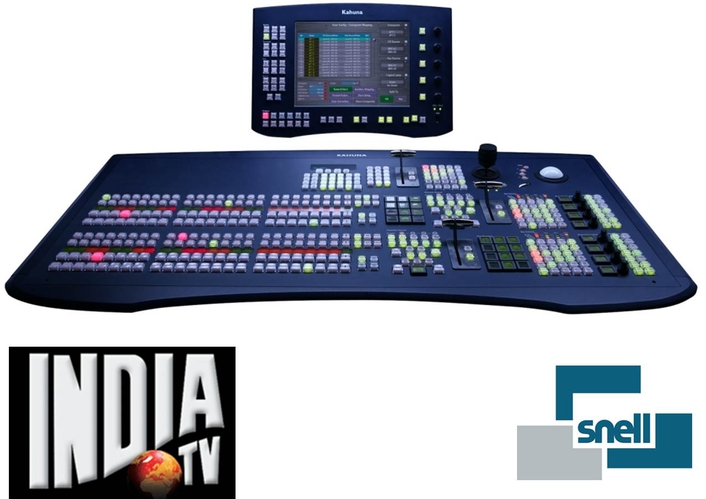 "News is very important for Indian television viewers, and they demand round-the-clock access to the latest developments in current and breaking news. Therefore, it is extremely important that our operation be run with only the most reliable equipment," said Mr. Vinod Kala, vice president (technical) for India TV. "When we began evaluating production switchers to support our programming expansion, Kahuna was an obvious choice. The switcher has an outstanding reputation for flexibility and reliability, and Snell's support and service is one of the best in the industry."

India TV is currently on air with a single Hindi-language channel, but it will shortly add an additional three channels to its lineup. When the time came to make a capital investment in switching technology, India TV chose Snell Kahunas based on their built-in features for redundancy as well as their ability to handle many functions, such as stills stores and RAM recorders, which typically require the purchase of peripheral equipment. During live news production, India TV producers can easily add complex, multi-layered effects that might otherwise have required expensive post-production work. Kahuna's multi-format capabilities for seamless mixing of SD sources into HD broadcasts will provide a smooth migration path to HD for the broadcaster in the future.

"We're pleased that India TV selected Kahuna when it came time to invest in their own production switchers," said Naresh Subherwal, president, Asia Pacific at Snell. "Kahuna's bullet-proof reliability and great versatility for 24/7 live operations, together with its future-proof ability to support new channels and new formats such as HD, make the switcher the perfect choice for dynamic and growing news operations such as India TV."

Kahuna from Snell is the world's first and only true multi-format SD/HD production switcher. Thanks to a Snell technology called FormatFusion, Kahuna enables simultaneous SD and HD operations in the same mainframe and on the same control panel. This vastly simplifies the HDTV transition for broadcasters by eliminating the need for external HDTV up/down/crossconverters in the live production environment, as well as the cost and the signal path delay associated with these products. Kahuna has the smallest mainframe, lowest weight, and lowest power consumption when compared with other large switchers, and it has been integrated with dozens of third-party products including routers, servers, automation systems, and controllers.

India TV is one of India's most popular national news channels, broadcasting 24/7 to Hindi-speaking citizens from its headquarters in Sector 85, Noida. In only a short period, India TV has earned a reputation for credible reporting, courage, espousal of public interest, and unmatched delivery, which is of great value to all stakeholders. The channel maintains bureaus and a sales presence throughout the country. India TV has state-of-the-art digital connectivity and a new 125,000-square-foot broadcast center in Noida.