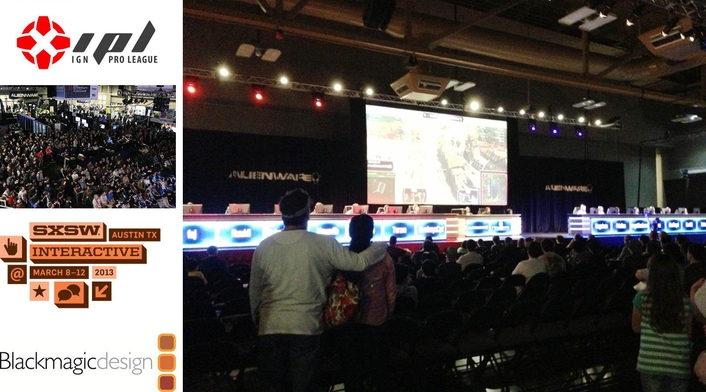 IPL brought in 27 top players from around the world to compete for cash prizes and rankings in “StarCraft II,” “League of Legends” and “World of Tanks.” During the tournaments, each player was stationed at a desk equipped with a computer for game play and an audience facing 54" LED screen mounted on the front. The screens displayed logos and information from IPL’s proprietary web application, such as player names and viewer votes on potential winners.

“The application is run by an open source program called Caspar, which was created by the Swedish government for broadcast graphics and adapted for IPL’s use,” said Tracy Peterson, manager, video production, eSports, IGN Entertainment. “The dynamic data is piped through Adobe Flash Player, then the Caspar system pushes it out via DeckLink Quad cards to Mini Converters, which feed the 54" screens. We use the DeckLink Quad cards so each of our four graphics computers can feed four to eight screens.”

At the heart of the operation were the Micro Videohub and Videohub Master Control, which route the Caspar graphics, switcher feed and even a direct video playback should the switcher go offline. The feeds were routed to a 21 ft. diagonal center stage screen, which also displayed logos, advertisements and sponsor information. In running a multitude of graphics, IPL relied on the Micro Videohub to change inputs without any disturbance to the viewing experience.

“‘League of Legends’ is the most popular game in the world right now, and it has a huge library of fantastic characters that the players select from. Every viewer has their own favorite, and the selection of these characters is a ceremonious moment in the event,” said Tracy. “We use in game animations and our graphics system to run a short hero animation for each character as they are selected. This portion of the show excites the audience and gets them ready for the main event, so it needs to be flawless. The graphics come directly from the DeckLink Quad cards, through the Micro Videohub and are projected onto the center stage screen. We also use the Micro Videohub to seamlessly switch from the program to the Caspar feed and back again during this sequence.

“We invest a lot of money in our stage show, which is why we stream them live on Twitch.tv and about an hour later on YouTube and our syndication channels using the recordings of each match. We use the H.264 Pro Recorders to capture high quality digital recordings that we upload directly to the Internet. The devices are easy to set up and operate, as well as work well in any environment,” he said.

“The ATEM Camera Converters saved us hundreds of dollars per day per camera. In only a few events, we could justify the upgrade to fiber, and the ability to run miles of fiber was a huge bonus,” said Tracy. “We are looking into using fiber to combine three to five stage shows to create a new wrap up channel and provide analysis and tournament updates throughout the day, live. Without Blackmagic Design, we simply wouldn't be able to do all this.”