Honorary membership and first Broadcast & Media Industry Woman of the Year amongst awards announced
IABM has announced the winners of its yearly awards during a gala dinner at its Annual International Business Conference. The awards seek to recognise both individuals and organisations within the broadcast and media manufacturing supply industry that demonstrate innovation and leadership, and this year sees the inclusion of a new category, Broadcast & Media Industry Woman of the Year.

The new award champions the achievements of business women on the supply side of the industry, acknowledging enterprising spirit, determination and the drive to perform. 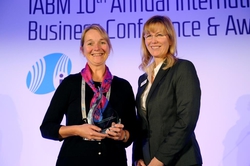 The inaugural winner, Naomi Climer, is currently president of Sony Media Cloud Service, and began her career as a broadcast engineer for the BBC in 1987. She has been very active in both the broadcasting side of the industry as well as manufacturing side. Climer was recently appointed president-elect of the Institute of Engineering Technology and will become the first woman president when she begins her role in October 2015. Climer is also the first member of the broadcast manufacturing fraternity to hold this office. 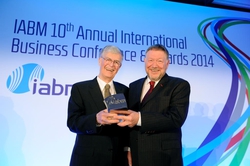 IABM honorary membership is awarded to major industry figures that have made a significant contribution to the supply side of the broadcast and media technology market over a period of decades, as well as influenced its development. It was awarded to John Ross in acknowledgement of his achievements and the role he has played in shaping the broadcast manufacturing supply industry, as well as his passion for invention and innovation.

The other awards include the Peter Wayne Award, Young Person of the Year and Sustainability Award.

AXON won the prestigious Peter Wayne Award for innovation for its neuron networked live production system. Axon is one of the first companies to implement the IEEE Audio Video Bridging and has demonstrated this multiple IP switches and interfaces to several third party products.

The Young Person of the Year Award winner, picked from IABM’s 2012 and 2013 student winners, was announced as Adam Plowden. Plowden won the IABM Student Engineering Award which afforded him a visit to IBC. He took advantage of the opportunity, networking and developing a range of contacts at the show that would help him as he began his career. Several IABM members commented on Plowden’s enthusiasm and passion for the industry.

“Following IBC Adam kept in touch with IABM and has since worked with us on a number of occasions to deliver high quality content,” explains Steve Warner, Training Manager, IABM. “Adam has been a fine advert for our award scheme and thoroughly deserves this award.”

Elemental Technologies won the Sustainability Award, meeting the standards of recognising its corporate obligations to minimise its environmental footprint by demonstrating ethical behaviour and integrity in all commercial activities.

John Ive, Director of Business Development & Technology and head of the award judging panel says: “Here is a relatively young company, founded just eight years ago that clearly understands both areas as part of their core values, which are proudly expressed on their website. The judges were particularly impressed with the employee engagement encouraged as an integral part of their green initiatives and the emphasis on support for their community.”