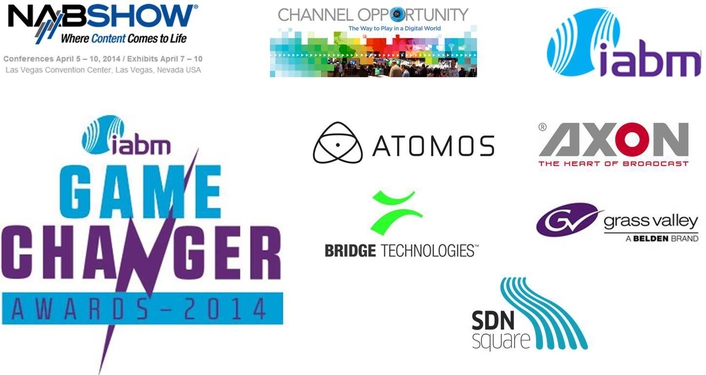 Innovation acknowledged: five companies win prestigious award
The IABM (International Association of Broadcasting Manufacturers) has announced the winners of its prestigious Game Changer Awards during a cocktail reception at the NAB 2014 Show in Las Vegas.

Atomos with Shogun; Axon with its Neuron AV Bridging; Bridge Technology with VB288 Objective QoE Content Extractor; Grass Valley with GV Stratus; and SDN² with GRID took top honours at the event. All winners are now to be considered for the IABM Peter Wayne Award for Design and Innovation to be presented at the IABM Annual International Business Conference and Awards in December.

Winners were selected based on the innovation of their products and services, the benefits they bring to customers and the industry as a whole, as well as influence on the industry, impact potential over the next 12 months, and economic factors like ROI, cost of ownership and expected user savings.

“These awards are about recognising companies that challenge the status quo, by going beyond the accepted rules and conventions to deliver products and services that are, truly game changing,” says White.

About the IABM:
The IABM, the International Association of Broadcasting Manufacturers, is the authoritative voice of the broadcast and media technology supply industry worldwide. Its wide range of services to members encompasses market research and intelligence, training, expert representation at standards bodies and broadcasting unions, executive networking opportunities, and preferential purchasing. A presence at every major broadcast tradeshow, the IABM also provides a valuable channel for communication among broadcast manufacturers, government, and regulatory bodies. Additional IABM activities include awards programs for innovation and scholarships designed to stimulate the development of the broadcast and electronic media industries on an international basis.