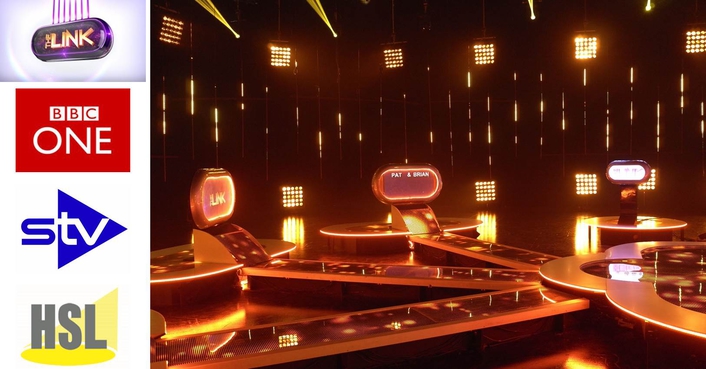 The first 25 episodes of the show was recorded in Studio A at BBC Scotland in Glasgow and produced by STV Productions. Presented by Mark Williams (of Harry Potter fame) and directed by Julian Smith, it will air on BBC1 during a primetime 5 – 6 p.m. slot.

The show format sees three teams race against time to find ‘The Link’ between questions, in the process their daring, strategy and teamwork is rewarded.

HSL’s Project Manager Sean McGlone comments, “We have worked with Tom on many projects and it’s always a pleasure. His lighting brings a freshness and a new visual dimension to any environment in addition to all the standard requirements, so there is always something different to look out for”.

Kinane has lit a diversity of quiz shows in his career, and for this one, his creative starting point was Chris Webster’s set design which had a heavy LED presence.

This partly influenced his choice of lighting fixtures and the Jarags in particular were picked to provide a super-bright tungsten source that would contrast with the LEDs.

These and the Sharpies provided essential eye candy. 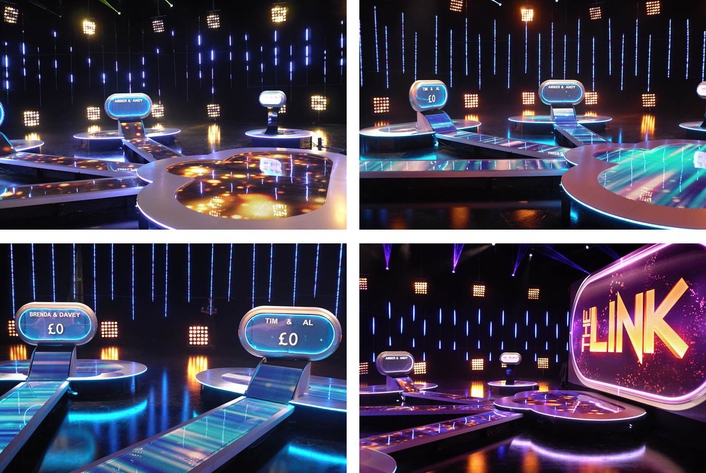 “I wanted to introduce a touch of quirkiness and an off-beat feel with the lighting and I was pleased with what we achieved,” comments Kinane adding, “As always, it was great working with HSL – the kit and the service were up to all the standards one expects”.

The Jarags were rigged in the studio roof and on the floor around the circular set and provided excellent back-filler for camera shots.

The Sharpies were used for providing those fabulous sumptuous ceiling focuses that they do so well, and with the addition of gobos and prisms, Kinane could vary the Sharpie looks and develop specific lighting scenes for certain parts of the show.

Around 80 x LED Ribbon 1s, ensconced in the set and supplied by Adam Howard and Jez Smith were also under Kinane’s control.

The Link’s Commissioning Editor Jo Street – who together with Gary Chippingham and Paul Johnson was one of the Executive Producers – was extremely pleased with the aesthetic results.

The Crew Chief was John Adamson, and the generic and white lights were operated by Richard Jarrett, both from BBC Scotland’s in-house lighting crew.