Horus, Pyramix and Ravenna in Paris with Radio France 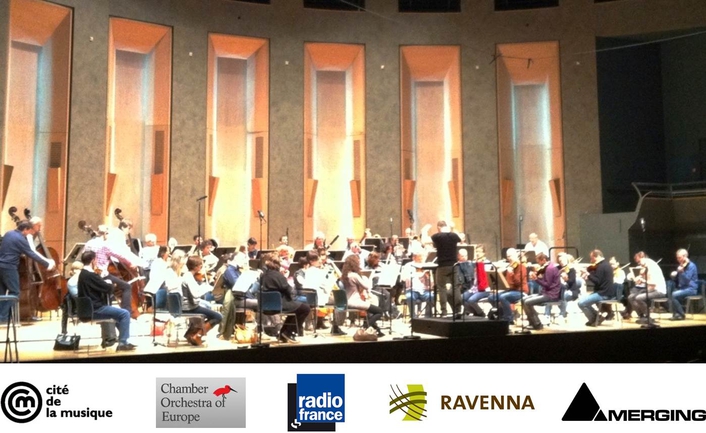 The internationally acclaimed Chamber Orchestra of Europe was under the direction of the talented Canadian conductor, Yannick Nézet-Séguin. Four symphonies and three concertos were captured for broadcast on France Musique and for live webcasting on Arte Live and Medici and will remain on the France Musique website for the rest of the month. The symphonies were also recorded for a future Deutsche Grammophon release of all the Schumann Symphonies.

As a requirement for the DG release, a 24 bit 96 kHz recording was mandatory and when sound engineer, Christian Lahondes sought advice from the Radio France technical services team, it was suggested that this would be the perfect situation to use the newly purchased Merging Technologies’ Horus Networked Audio Converter with Pyramix V 8.0.  The equipment had to be housed in the OB van down below the concert hall so a relatively compact rack containing the Horus and other interfaces was imported.

The microphones were split between the Studer stage box and the Horus analogue inputs.  The Horus was then connected to the Pyramix with one Ethernet cable handling the RAVENNA stream. For safety reasons, it had been decided to use another Pyramix 7.1 system as the back-up and this was easily connected to the Horus via the standard MADI connections.  For ease of monitoring, the AES/EBU inputs were able to feed the direct mix signal to both Pyramix. The microphone gains were conveniently controlled via the web interface in the OB van. 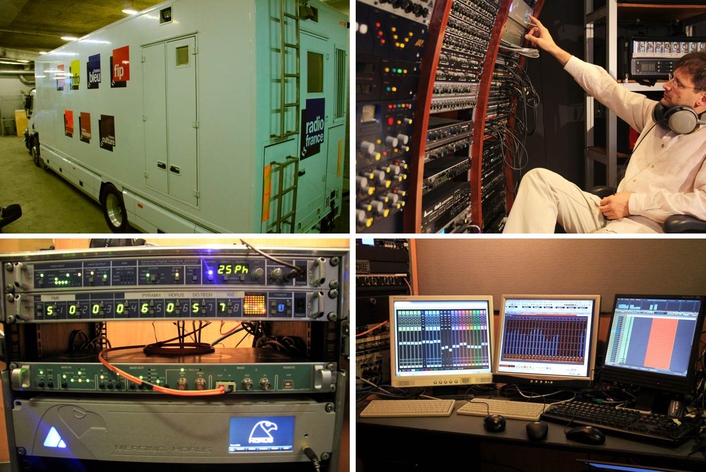 Daniel Zalay, Radio France’s Grammy winning, chief recording producer" was really amazed by the quality and transparency of the sound, but left the more detailed but left the more detailed comments to his colleague, Christian Lahondes.  “We all found that Horus was very simple to control and very flexible to use. The possibility to have the same signals in analogue, AES, MADI and RAVENNA really helped us to complete this project where quality was so important. My colleagues from the OB van team really liked the concept of RAVENNA and appreciated the convenient size of the Horus unit.”

Horus is now under evaluation or already in use with a number of national broadcasters who are taking a keen interest in the possibilities afforded by RAVENNA.  Horus has just won the Resolution Award 2012 in the Interface category and has been given Best in Show awards at IBC 2011 and NAB 2012.

The Chamber Orchestra of Europe is acknowledged as "the finest chamber orchestra in the world" (BBC Two Television). Founded in 1981 by a group of young musicians graduating from the European Union Youth Orchestra, it was their ambition to continue working together at the highest possible professional level, and of that original group, eighteen remain in the current core membership of around sixty. The members of COE, selected by the Orchestra itself, pursue parallel careers as international soloists, Leaders and Principals of nationally-based orchestras, as members of eminent chamber groups, and as tutors and professors of music.Performances are given regularly in the major cities of Europe and occasionally in the USA and Japan.Over the years the COE has performed with many of the world’s greatest artists. The Orchestra has developed especially close relationships with Claudio Abbado, Bernard Haitink, Nikolaus Harnoncourt, Vladimir Jurowski, Yannick Nézet-Séguin and András Schiff.The Chamber Orchestra of Europe works with all the major recording companies and, in only thirty years, has recorded over 250 works. It has won numerous prizes for its recordings including three Gramophone Record of the Year awards and two Grammys. The COE was the first Orchestra to create its own label, “COE Records”, in association with ASV Records, now distributed by Sanctuary/Universal Music.The COE has been a European Cultural Ambassador since 2007 and benefits from substantial support from the EU Culture Programme. It also attracts support from other organisations, most notably from The Gatsby Charitable Foundation

RAVENNA is a technology for real-time distribution of audio and other media content in IP-based network environments. Utilizing standardized network protocols and technologies, RAVENNA can operate on existing network infrastructures. RAVENNA is designed to meet the strict requirements of the pro audio market featuring low latency, full signal transparency and high reliability.While primarily targeting the professional broadcast market, RAVENNA will also be suitable for deployment in other pro audio market segments like live sound, install market and recording. Possible fields of application include (but are not limited to) in-house signal distribution in broadcasting houses, theatres, concert halls and other fixed installations, flexible setups at venues and live events, OB van support, inter-facility links across WAN connections and in production & recording applications.

Merging Technologies SA is a Swiss manufacturer with over 20 years of experience of developing groundbreaking, professional Audio and Video products for a wide range of entertainment and media industries. With a dedicated user base in the elite end of the music, film, television, mastering and performances industries, Merging Technologies is committed to developing product ranges with unrivalled quality and flexibility, no matter what the application. Merging builds tools for people who want more from their systems, have an inherent need to push boundaries, and believe that quality always comes first, every time.