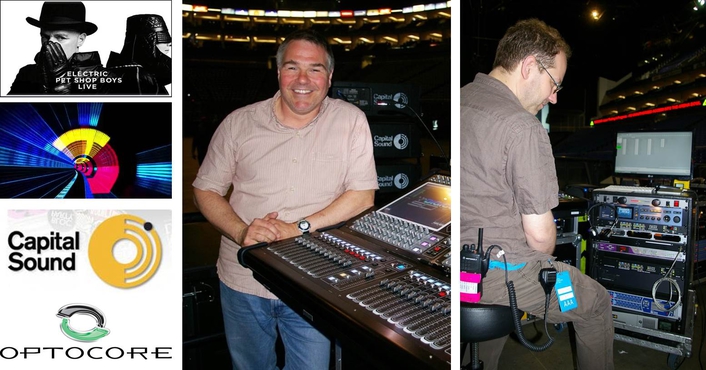 Holger has been carrying two Optocore DD4ME MADI converters in his compact FOH side rack for some time, with a third DD4ME at the monitor desk. Providing production on this tour is Capital Sound Hire — who themselves invested in an Optocore system for last year’s Take That stadium shows.

Both Holger and Seamus have chosen the compact DiGiCo SD10-24 consoles, along with a DiGiCo SD-Rack at the monitor desk. While these consoles come equipped with an optical loop interface, they decided instead to run Optocore as an entirely independent network, giving them greater flexibility to patch signals between their ‘playback world’, the SD-Rack, the two mixing desks, a MADI-equipped Mac Mini at FOH, FX units at FOH, and finally an independent additional MADI output for occasional multichannel recording — keeping everything digital.

The process began on a previous tour in 2009, when their DiGiCo SD8 consoles did not have optical connections. “Since we use MADI-enabled multichannel playback equipment on stage, I did not want to rely on copper connections so I was looking for a reliable, redundant fibre system that would also guarantee that the digital clocks on stage and FOH stayed in perfect sync at all times,” said Holger. “Once we started using Optocore DD4ME's, it quickly became obvious how much extra flexibility it gave us in patching communication mics across, or sending FOH special effects back to monitors, without needing an XLR return core," he said. 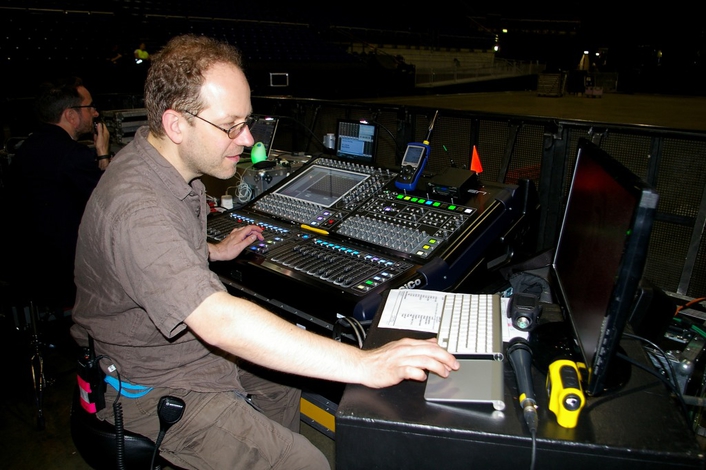 Meanwhile, down in Monitor World, Seamus Fenton has been running two fibres out of his Optocore linked to FOH, which is effectively merging two MADI streams. The DiGiCo SD-Rack, which provides inputs for mics (as well as live keyboards), is connected to the monitor console via BNC MADI cables, with full control over gains etc. from the monitor desk. A second MADI output on the SD-Rack feeds one of the DD4ME inputs, to be picked up by FOH and the recording output. "We decided early on that gain control from FOH is not required, as we only have a few mics anyway and rarely change their gains.”

The multitrack playback, that contains an essential part of Pet Shop Boys' music, originates in a redundant pair of MADI-equipped computers near the monitor desk, combined using a DirectOut EXBOX.BLDS switchover unit, which feeds the other DD4ME input on stage.

The first output of that DD4ME goes into the monitor desk, carrying the multitrack playback and also comms mics and some effects from FOH, while the second output is reserved for recording.

The DD4ME was designed to offer digital I/O compatibility with a range of devices, such as digital consoles with coaxial BNC MADI I/O’s, and the huge amount of channels exchanged by a single DD4ME makes it a highly cost effective interface, with two MADI input and two MADI output ports allowing the transmission of up to 128 input and 128 output digital audio channels per device.

At the FOH end of the two fibre cables, fitted with standard expanded beam connectors, the two DD4ME devices have a total of four MADI I/O's — two connected to the MADI ports of the FOH desk, offering a theoretical maximum of 112 channels each way between the console and the Optocore network. The third DD4ME MADI I/O is taken by a Mac Mini with DiGiCo’s UB MADI interface, featuring tasks like system alignment tools, analysers, live plugin processing and recording for virtual sound checks, while the final MADI I/O connects to a TC6000 reverb, with a DirectOut EXBOX.AES converter in line. 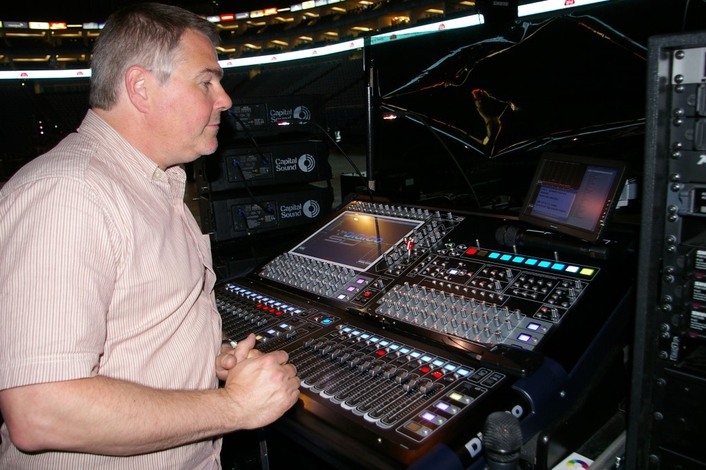 “Optocore is our entire backbone,” says Schwark. “It allows me to patch everything through the network. I connect both of the consoles’ ports to the network, as well as my peripherals, and can now use the desk's built-in tricks for virtual soundchecks for, say, 40 recorded channels, while still connecting to my reverb engines and analyser software on the higher-numbered channels. It works beautifully well and makes best use of the existing I/O on the back of the desk, without adding a bulky local I/O rack.

“From the first day, what I loved about this system is its reliability, and the fact that it has 'Link 1' and 'Link 2' LED’s for the fibre connections, so I can see if communication with the stage end is established. This means that we don't have to do extensive line checks anymore — great in festival situations where we don't use our own cables, but use festival-provided DiGiCo-style fibres. Plug it in, wait until the other end has plugged in by occasionally checking the Link LED's, check if the shout mic works … line check done!"

Seamus Fenton also has nothing but praise for the Optocore system. “It is a phenomenally flexible tool,” he says, “it just always works!”

Playing through the new Nexo STM PA, which Capital Sound Hire recently invested in, at London’s O2 Arena the sound engineers (and experienced system tech Al Woods) ensured a dynamic set delivery from this synth-driven ‘80’s band, leading up the finale that included old hits such as Always On My Mind and West End Girls.