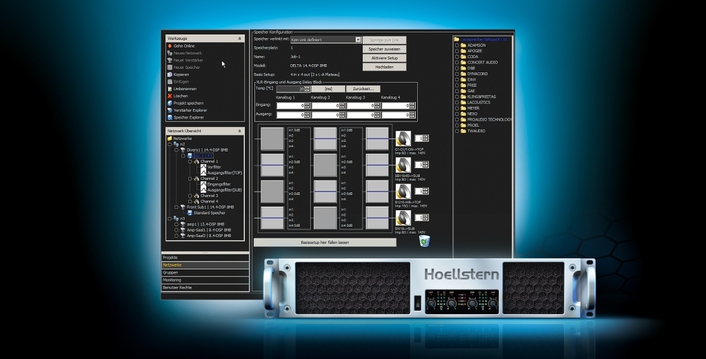 A unified, global system solution for many loudspeaker models and manufacturers.
The Konfigurator2™ is a software package with a manufacturer-independent loudspeaker library. K2 provides the configuration and monitoring of Hoellstern® amplifiers.

With the Hoellstern® Konfigurator2™ (K2) software Hoellstern® amplifiers can be configured and monitored within the RS-485 network. The Java-based Konfigurator2™ runs on Windows and Macintosh platforms. As a novelty a computer can now control several networks simultaneously under one K2 interface. This means that ring and star network topologies can be used in a mixed mode on one PC, which may come in very handy with larger jobs and permanent installations. Hoellstern® Amplifiers will offer different converters for the RS-485 bus conversion.

All jobs are organised as projects with a user rights administration. Via drag and drop you can create networks, incorporate Hoellstern® amplifiers, configure memory locations as well as the available DSP elements like filters, delay and limiter. Via drag and drop you can draw setups from the manufacturer-independent loudspeaker libraries onto the channels and then configure them in detail. After a short learning period, a freely selected system setup can be created within a few seconds. Three different group tools greatly facilitate the configuration of several amplifiers within the network and reduce the typical error sources. Everything takes place under one interface: status monitoring, configuration and administration plus service and firmware update of Hoellstern® amplifiers.

As another novelty Konfigurator2™ does not only configure the loudspeaker setups, i.e. the loudspeaker blocks per channel, but also the DSP technology which is to be used for each memory location. This means that so-called base setups are drawn via drag and drop onto the DSP SoftEngine. Thus the entire Hoellstern® DSP platform is open for any kind of controller and setup architecture.

The Konfigurator2™ software package and the most useful Hoellstern® loudspeaker libraries will be further extended in the years to come and are available at no charge for the users.

The Windows version of Konfigurator2™ will be available from October 2012, the Mac version from November 2012.

Since 2006 the team at Hoellstern® Amplifiers has offered loudspeaker setups and emulations of setups for many different loudspeaker manufacturers. Hitherto the fixed files and setups were uploaded into the amplifiers by means of the simple Konfigurator1™ software and activated as DSP memory locations when needed. The comprehensive K1 files or setups resp. are available for upload on the Hoellstern® website.

The new Konfigurator2™ software package is a milestone in terms of flexibility and user friendliness. True, technically speaking the users face a much greater challenge, but they can decide ad hoc which system shall be used in what combinations. A unified, global system solution for many loudspeaker models and manufacturers.