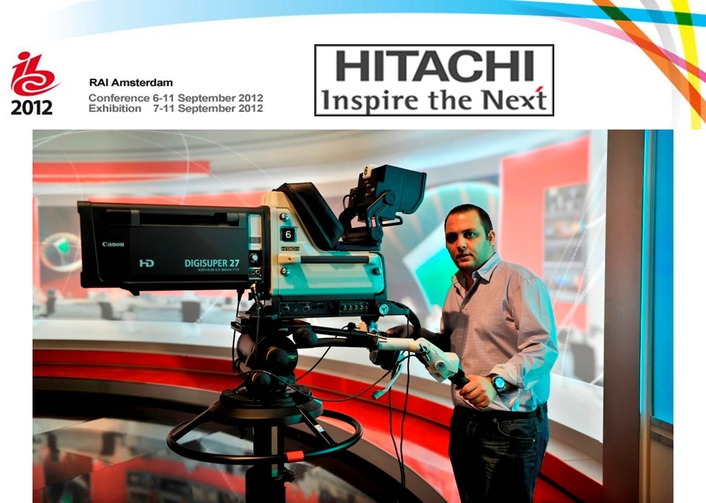 New and Extended Camera Range & Strategic Marketing Initiative to be Rolled Out at IBC 2012
On its stand at IBC 2012 (11.E30), Hitachi Kokusai Electric Europe will unveil a new integrated broadcast system camera technology & strategic marketing initiative aimed at placing the company on a renewed growth path in Europe. The developer of the first portable professional video camera that could compete against studio cameras in the early 1990s, the inventor of digital TRIAX technology, and the first company to introduce a full 1080p 3G high definition (HD) camera, Hitachi states ambitions to re-establish itself as the market leader and moving force in broadcast system cameras.

Amongst the new Hitachi cameras making their European debuts at IBC 2012 will be the SK-HD1500 super slow motion camera, and the 16-bit SK-HD1200 1080P/3G production camera which will be shown working in combination with LGZ’s Just Replay Server system.

Hitachi will also showcase a number of production cameras that have been specifically developed for different broadcast applications from wireless operation to Fiber system, P.O.V. and goal-mouth cameras.

“Since the days of anti-dumping levies, Hitachi has been a sleeping giant within the broadcast system camera market but at IBC 2012 visitors will witness the start of a new era in our company’s development,” stated Paddy Roache, Director and General Manager of Hitachi Kokusai Electric Europe. “A major broadcast camera research and development initiative is starting to pay rich dividends, many of which will be on show for the first time in Amsterdam. Alongside which, we will announce a strategic marketing initiative and a development roadmap that will position us in the vanguard of this dynamic technology sector.”

About Hitachi Kokusai Electric
Broadcast and professional video cameras made by Hitachi Kokusai Electric are synonymous for innovation and ultimate performance - Hitachi has been one of the most significant Japanese companies in developing broadcast camera technology.
Hitachi launched the first portable Professional Video Camera that could directly compete against studio-cameras in the early 90s - a technical revolution in its time. The company is also responsible for the development of digital TRIAX-technology.

Today Hitachi is even more successful in developing and providing high-end broadcast technology. It is committed to meeting the needs of its users today, while helping to forge a migration path for tomorrow. Studio productions, documentaries, sports or live-events, Hitachi offers sophisticated camera systems for a wide range of production techniques.