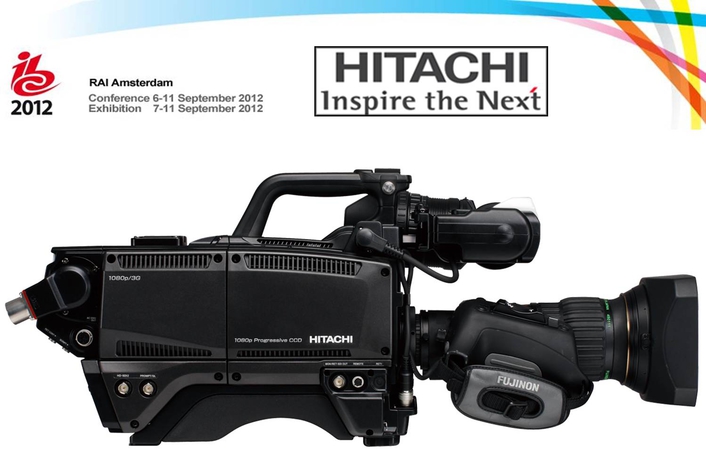 The product of a long-term development initiative with Hitachi, the SK-HD1200 is capable of simultaneous SD and HD outputs and supports the widest range of HD signal formats, including 1080p, 1080i and 720p.

The lightweight 4.4Kg camera is a two-piece dockable design. Hitachi’s efforts to miniaturise electronic circuitry has yielded not only the smallest and most flexible Hitachi HDTV camera ever, but also one of the “greenest” and most power efficient (22W camera head power consumption) cameras on the market.

The SK-HD1200 takes full advantage of the increased dynamic range output of the new imagers by using the latest integrated16-bit analogue-to-digital converters (ADC). These high speed ADCs are the bridge between the analogue output of the CCDs and the advanced Hitachi digital signal processor (DSP).

All major components of the Hitachi SK-HD1200 camera system possess their own DSP processor. Different DSP ICs are used independently for the HDTV camera head processing, the transmission system and the Camera Control Unit (CCU) processing. The new power-efficient digital signal processor LSI’s are designed under the 40nm rule with dynamic processing capability in excess of 38-bits per pixel, per RGB channel.

Hitachi’s DSP processors are designed to support the higher bandwidth of progressive readout HDTV sensors. The increased dynamic headroom of the SK-HD1200 allows faithful reproduction of even the most contrasting images. An excellent overall signal-to-noise ratio is achieved by using proprietary low-noise circuit technology without resorting to noise filtering methods. Even at high gain, clear images are obtained with little noise.

Hitachi has brought to market the first 3Gbps, fully digital optical transmission system in an HDTV production camera. It is the most accurate transport available for the 10-bit, 1080p images from the camera head to the camera control unit. All command audio and video signals to and from the camera are digitally transmitted and hence totally immune to EMI/ RFI interference. Camera power and cable condition supervision is enabled using standard SMPTE311-type Hybrid Fiber Cable. The maximum HFOC length with applied camera power and fully operational facilities is 4,000m (13,200 feet) with no utility power.

Unique to cameras in the SK-HD1200’s price range are optical power meters at the camera head (via engineering menu) and on the front of the CU-HD1200 camera control unit. These meters indicate the optical condition of both the receive and transmit signals independently to accurately depict the proximity to the “digital cliff”, maximum cable distance or provide basic fiber cable diagnostics in the field.

Hitachi launched the first portable Professional Video Camera that could directly compete against studio-cameras in the early 90s - a technical revolution in its time. The company is also responsible for the development of digital TRIAX-technology.

Hitachi has been a long-term collaborator with Japanese broadcaster, NHK on the Super Hi-Vision (Ultra HD) project. Last month, NHK debuted a new lightweight prototype Hitachi SHV camera at SHV screenings of the 2012 London Olympic Games. The new cameras weigh just 4kg, compared to 20kg for the models being used to film Olympic events, and 80kg for the original SHV camera, made in 2001.

Today Hitachi is even more successful in developing and providing high-end broadcast technology. It is committed to meeting the needs of its users today, while helping to forge a migration path for tomorrow. Studio productions, documentaries, sports or live-events, Hitachi offers sophisticated camera systems for a wide range of production techniques.

About Gearhouse Broadcast Limited
Gearhouse Broadcast are a market leader in the field of Broadcast Services specialising in broadcast equipment rental, equipment sales, project solutions and systems integration, operating globally with offices in the UK, US, Australia and Qatar.  The company offers a vast degree of experience and a proven track record in its involvement in major world sports events.

Gearhouse Broadcast can meet the most complex, mission critical project requirements locally or on location anywhere in the world.  The people are among the best in the industry, drawing on a broad spectrum of experience, offering the latest technology equipment for hire or as part of an overall project solution.