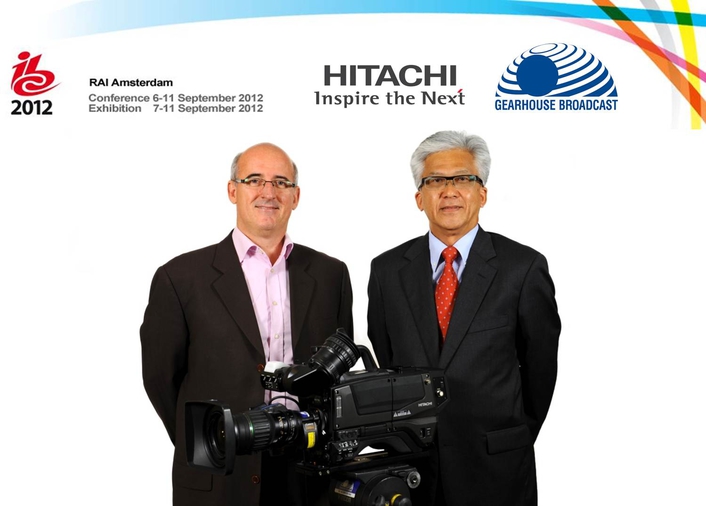 Eamonn Dowdall, Business Development Director at Gravity Media Group and Masahiko Kato, Chairman of Hitachi Kokusai Electric
One of the longest established technology suppliers to the broadcast system camera market, Hitachi Kokusai Electric Europe, has opened up IBC 2012 with an announcement that will sting many of its competitors. Hitachi has formed a strategic sales and market development agreement with international broadcast rental, project solutions, systems integration, equipment sales and outside broadcast company, Gearhouse Broadcast. The agreement provides Gearhouse Broadcast with prime distribution rights to all Hitachi broadcast cameras in many international territories.

Under the conditions of the agreement, Gearhouse Broadcast will enhance Hitachi customers’ pre- and post-sales experience by making available its market-leading engineering facilities and offering an extensive rental inventory of Hitachi camera systems. Hitachi believes that through this partnership, the two companies will improve the quality of ownership and enhance the perception of the Hitachi brand within the international broadcast market.

“Our stated intention is clear: we are determined to become regarded as the leading supplier of 3G and future camera technologies. New ventures, such as our relationship with Gearhouse Broadcast are fundamental to support our growing presence in world broadcasting,” commented Masahiko Kato, General Manager, Global Business Division of Hitachi Kokusai Electric.

“This is an ambitious goal and one that we will achieve,” continued Kato. “If we wish to become perceived as the best in the market, then we need support in key markets from the best company in the business. This is why we have selected Gearhouse Broadcast.”

“Hitachi’s pedigree in the broadcast camera market is outstanding and in developing their new family of HD and 3G systems cameras they have demonstrated that they have lost none of their skills and experience. The new Hitachi cameras are well engineered, robust and reliable,” reported Eamonn Dowdall, Business Development Director at Gravity Media Group, the parent company of Gearhouse Broadcast. “Our relationship with Hitachi is both practical and strategic. The facilities and services that we provide at Gearhouse Broadcast offer the level of support that Hitachi broadcast customers, and indeed all broadcast camera users expect and demand.”

“We’ve been using the Hitachi cameras in our rental fleet and on numerous major sports projects for some time and we are tremendously impressed by their build quality and technical sophistication. We predict a great deal of interest in the coming months and years,” Dowdall concluded.

About Hitachi Kokusai Electric
Broadcast and professional video cameras made by Hitachi Kokusai Electric are synonymous for innovation and ultimate performance - Hitachi has been one of the most significant Japanese companies in developing broadcast camera technology.
Hitachi launched the first portable Professional Video Camera that could directly compete against studio-cameras in the early 90s - a technical revolution in its time. The company is also responsible for the development of digital TRIAX-technology.
Hitachi has been a long-term collaborator with Japanese broadcaster, NHK on the Super Hi-Vision (Ultra HD) project. Last month, NHK debuted a new lightweight prototype Hitachi SHV camera at SHV screenings of the 2012 London Olympic Games. The new cameras weigh just 4kg, compared to 20kg for the models being used to film Olympic events, and 80kg for the original SHV camera, made in 2001.
Today Hitachi is even more successful in developing and providing high-end broadcast technology. It is committed to meeting the needs of its users today, while helping to forge a migration path for tomorrow. Studio productions, documentaries, sports or live-events, Hitachi offers sophisticated camera systems for a wide range of production techniques.

About Gearhouse Broadcast Limited
Gearhouse Broadcast are a market leader in the field of Broadcast Services specialising in broadcast equipment rental, equipment sales, project solutions and systems integration, operating globally with offices in the UK, US, Australia and Qatar.  The company offers a vast degree of experience and a proven track record in its involvement in major world sports events.
Gearhouse Broadcast can meet the most complex, mission critical project requirements locally or on location anywhere in the world.  The people are among the best in the industry, drawing on a broad spectrum of experience, offering the latest technology equipment for hire or as part of an overall project solution.