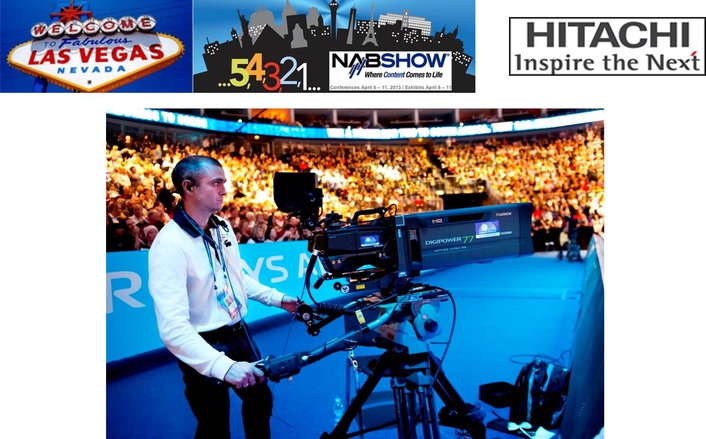 World’s First 6Gbps Fully Digital Optical Transmission System High Speed Camera Excels in Televising Australian Open Tennis
“In today’s international sports television market, super slo-motion HDTV cameras play a critical role in bringing the stunning pictures that spectators crave. This is why at Hitachi, we have dedicated so many resources in developing the world’s first 6Gbps triple speed camera system. At NAB, we will report on the outstanding success this camera enjoyed whilst televising the Australian Open Tennis Tournament in January,” so said Paddy Roache, Director and General Manager of Hitachi Kokusai Electric Europe on the lead up to NAB 2013.

The camera’s use of 6Gbps data transmission contrasts with competitive systems, which all use 10Gbps transmission. Hitachi’s implementation of 6Gbps transmission technology significantly extends the maximum cable length possible between camera head and control unit, by around 4000m.

Gearhouse Broadcast reports that in a wide range of different lighting conditions, the team enjoyed excellent picture quality from the Hitachi cameras and in particular they have been impressed by the new super slo-motion camera.

“We had zero pixel errors throughout this high pressure two-week production, which is exceptional since this can be an issue with other triple speed camera systems,” continued Moorhouse. “We have worked on the Australian Open for many years and this kind of live sporting event always brings its own stresses and strains, but this year the new Hitachi cameras have proved ultra reliable and robust in every scenario that we have encountered.”

Hitachi High Speed HD production camera
The SK-HD1500 represents Hitachi’s most accurate transport available for the 1080-line 150/180 images from the camera head to the camera control unit. All command audio and video signals to and from the camera are digitally transmitted hence, totally immune to EMI/ RFI interference.

Hitachi reports that in developing this camera, it has benefited from extensive beta testing in a range of live production environments at recent major sporting and cultural events. The company reports that users highlight superior HD image resolution through the camera’s use of 16-bit digital signal processing, good signal to noise (-58dB) and excellent depth of modulation (60% at 27.5 MHz) as being key features of the SK-HD1500.

“Slow motion HD video is an area that defines a broadcaster’s programming in so many genres from sport to natural history. The right camera choice can help broadcasters differentiate their channels from rivals and at Hitachi we have aimed to create a camera that enables this,” commented Paddy Roache, Director and General Manager of Hitachi Kokusai Electric Europe. “The SK-HD 1500 represents the market’s most advanced slow motion HD production camera and when combined with the SK-HD 1200 they offer a powerful and elegant HDTV production proposition.”

Each essential part of the Hitachi SK-HD1500 camera system has its own DSP processor. Different DSP ICs are used independently for the HDTV camera head processing, the transmission system and the Camera Control Unit (CCU) processing. The new, power-efficient Digital Signal Processor LSI’s are designed under the 40nm rule with dynamic processing capability in excess of 38-bits per pixel, per RGB channel.

Hitachi’s DSP processors are designed to easily manage the higher bandwidth of progressive readout HDTV sensors. The increased dynamic headroom of the SK-HD1500, allows faithful reproduction of even the most contrasting images. An outstanding overall signal-to-noise ratio is achieved by using Hitachi’s proprietary low-noise circuit technology without needing to resort to noise filtering methods. Even at high gain, clear images are obtained with little noise.

The SK-HD1500 is shipping now and is available to customers worldwide.

About Gearhouse Broadcast
Gearhouse Broadcast are a market leader in the field of Broadcast Services specialising in broadcast equipment rental, equipment sales, project solutions and systems integration, operating globally with offices in the UK, US, Australia, India and Qatar.  The company offers a vast degree of experience and a proven track record in its involvement in major world sports events.
Gearhouse Broadcast can meet the most complex, mission critical project requirements locally or on location anywhere in the world.  The people are among the best in the industry, drawing on a broad spectrum of experience, offering the latest technology equipment for hire or as part of an overall project solution.

About Hitachi Kokusai Electric
Broadcast and professional video cameras made by Hitachi Kokusai Electric are synonymous for innovation and ultimate performance - Hitachi has been one of the most significant Japanese companies in developing broadcast camera technology.
Hitachi launched the first portable Professional Video Camera that could directly compete against studio-cameras in the early 90s - a technical revolution in its time. The company is also responsible for the development of digital TRIAX-technology.
Today Hitachi is even more successful in developing and providing high-end broadcast technology. It is committed to meeting the needs of its users today, while helping to forge a migration path for tomorrow. Studio productions, documentaries, sports or live-events, Hitachi offers sophisticated camera systems for a wide range of production techniques.