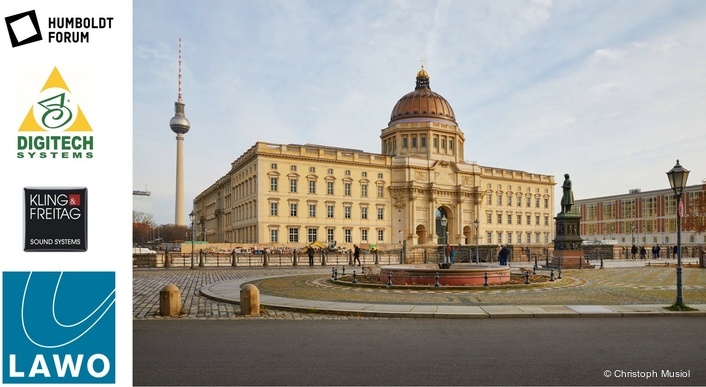 The Humboldt Forum, with its museums, event locations, exhibition spaces and facilities for cultural education, stands at the famous Berlin Palace on Spree Island in the historic center or Berlin. While its facades are largely modeled on the original, the complex’s interior is equipped with state-of-the-art technology tailored to modern needs — and supplied by Lawo.

Systems integrator Digitech installed a state-of-the-art IP-based audio infrastructure networked via a centrally-located Lawo Nova73 HD router. Designed for flexibility and scalability, the Lawo installation uses three latest-generation Lawo mc²56 production consoles and eleven DALLIS I/O systems. All areas for events and sound art projects are connected via Lawo stageboxes, each equipped to match the requirements of their respective facilities. Signal transfer throughout the building travels through the central router. 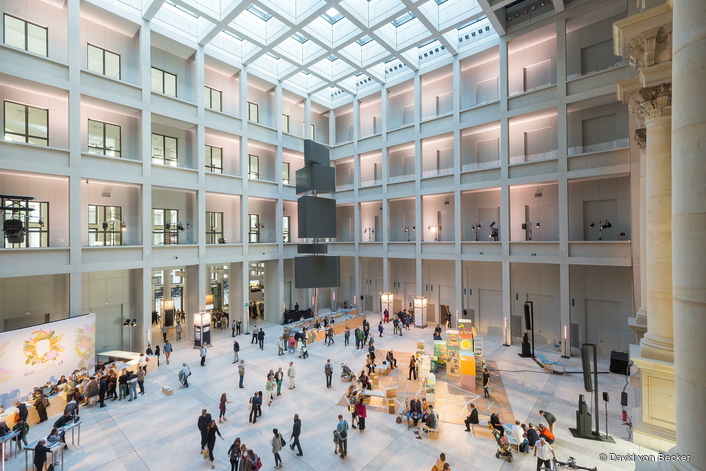 The main venues in the Humboldt Forum are extensively equipped with audio technology. They include two live-event halls of 500m² and 461m², the main lobby, and various seminar rooms. The “Schlüterhof” Yard, the Passage, and other areas are used for events and outdoor activities and are leased by stakeholders such as the Stiftung Stadtmuseum (Town Museum Foundation), Humbold Forum Foundation, the Staatliche Museen zu Berlin (Berlin State Museums) and Berlin’s Humboldt University.

Each of the two halls hosts a control room with an mc²56 (MKIII) mixing console (a 32-fader and 48-fader console, respectively) as well as a common central equipment room whose plug-in panel connects to the stage boxes generously distributed throughout the event and visitor facilities; these are and equipped with interfaces for audio, video, conference technology and control.

The Klangwerkstatt (Sound Workshop), operated by the National Museums of Berlin, is charged with the important work of maintaining the Lautarchiv (Sound Archive), a collection of historical sound recordings. This famous archive, one of the earliest such institutions in Europe, contains a collection of around 7,500 shellac records, wax cylinders, and audio tapes with historic recordings, some of which are over 120 years old, offering visitors and researchers invaluable phonetic and linguistic insights from the time of the German Empire and the Weimar Republic. In addition to technical facilities for the restoration of acoustic sources, the sound workshop operates a recording studio centered around a third Lawo mc²56 console equipped with 48 faders, providing up to 600 fully equipped broadcast DSP channels and a routing capacity of as many as 5120x5120 mono channels. The control room and audio connectivity allow the entire house to be integrated and utilized for historical and artistic projects. 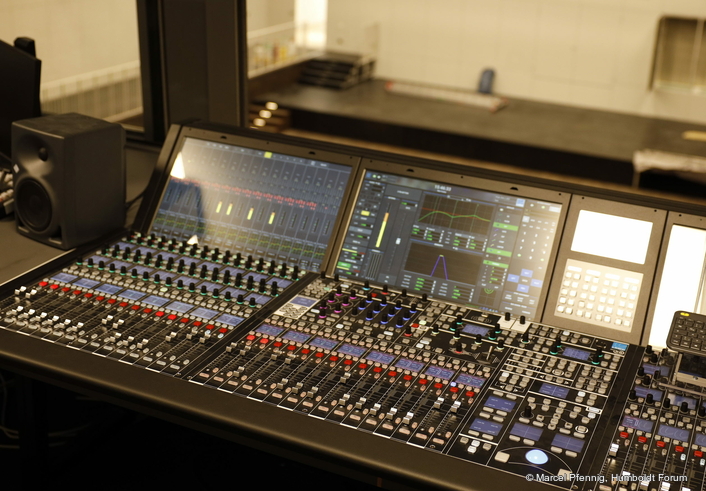 "The wide range of events expected in the future, both in terms of space and artistic-technical character, and the network links between them, tipped the scales in favor of the Lawo system," says Birger Gross, Head of Audio and Video Engineering at the Humboldt Forum. "The Lawo mc²56 production console, established and recognized primarily in the broadcast sector and now also in large and small opera houses and theaters, scores in various fields. In addition to its performance and flexibility, it offers intuitive working on the surface itself – including DSP handling and the measurement and monitor features, as well as remote capability via the mxGUI – and its connecting capability, via Crestron control for example, allows simpler events to be driven and controlled virtually without specialist personnel."

Gross continues: "The eleven DALLIS frames are distributed around the entire building and installed at the respective venues, so signal paths to microphone sources are kept pleasantly short. As technical operators, we welcome the fact that the signals from the individual venues are also available to every other console via the router, and broadcast security is maintained by means of the configured rights system. This mutual exchange of signals between all venues, backed up by Lawo's own redundancy, increases the creative possibilities enormously.”

In addition to the main Kling&Freitag sound system, Hall 2 is equipped with a Vivace reverberation system with 62 separate speakers on the walls and ceiling, and Hall 1 with twelve additional wall speakers. This variability, specifically the large number of additional loudspeakers that can be directly controlled by the Lawo system, will also be utilized by "Instrument," an AI-based composition platform. It accesses the sound archive and "composes" them further by evaluating ethnological, geographical and music-theoretical parameters. As this instrument is developed, it will also include live recordings of the audience, enabling it to react very spontaneously to include "call and response" audio events across the entire house. This closes the circle in terms of linking the audio and control signals within the Humboldt Forum. 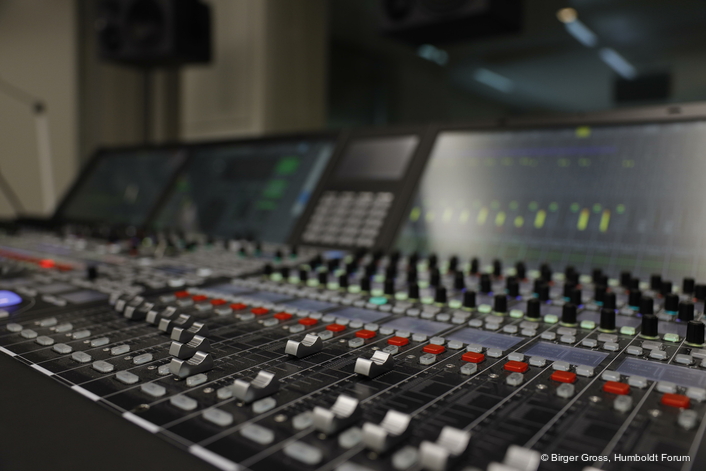 Gross sums up: "We find the Lawo system to be a generally very agile construct, making it possible for us to react quickly and efficiently to short-term, unconventional tasks. In conjunction with Riedel on the communications side, we are looking forward to tackling and implementing upcoming tasks, whether they are conferences or sound installations, theater performances or chamber concerts, cinema screenings or cross-room theme days, as soon as possible — and with a large audience!"