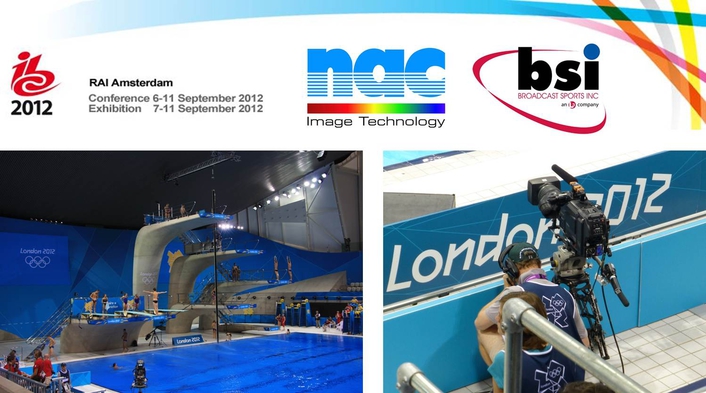 According to NAC’s Andy Hayford who oversaw field testing in London in July, “we have had technical rehearsals under the lights in a variety of venues, and the response to the flicker suppression feature for the Hi-Motion II™ is overwhelmingly positive! The broadcasters are keen to use the Hi-Motion II™ with flicker suppression because it takes ultra slow motion imaging to a whole new level, especially for the broadcasting of night games.”

BSI showed the High Speed NAC camera in wireless mode at IBC
Broadcast Sports, Inc. (BSI) a leading developer and service provider of wireless camera, audio and communication systems has partnered with NAC of Japan to develop RF links for NAC's high speed video camera. This engineering achievement from BSI means that, for the first time, the high speed NAC equipment can be used without cables, and directors can place it anywhere where there is RF coverage at an event.

BSI's wireless implementation of the NAC system retains the camera's full capability. At the heart of this new wireless system is BSI's own dual stream mini transmitter which provides the RF links for the live and playback video streams while a separate receiver provides the link for the remote control.

BSI has only just completed the development of the wireless links for the NAC camera and will exhibit the new system, for the first time ever, at IBC this year.

NAC manufactures high speed camera systems and prides itself on producing complete, integrated systems with the most light sensitivity, the best image quality, the largest memory capacities, the smallest camera heads, the fastest download times and the most inclusive software packages in the industry. The NAC camera operates at 400 frames per second compared to a normal HD camera, which operates at 25 frames per second. This means that High Definition video can be slowed right down to show even the fastest sports action in minute detail, frame by frame, in sports action replays.

The Hi-Motion II™ cameras have seen action, around the world, at many of 2012’s preeminent sporting events, including the Australian Open, the Super Bowl, Wimbledon, the British Open and this summer’s games in London. In addition, the Hi-Motion II™ continues to be embraced by broadcasters for live coverage of a variety of professional sporting events, including international motor racing, cycling, tennis, football, baseball, rugby, cricket, golf, boxing and horse racing.

About Broadcast Sports, Inc.
For over 25 years, Broadcast Sports, Inc., an L-3 Communications company, has been the leading provider of wireless technology and communications systems for television broadcasting. Headquartered in Hanover, MD, USA, BSI provides HD on-board cameras and wireless audio for a wide range of entertainment events around the world, including the NASCAR, NFL, the PGA Tour, the LPGA Tour, the Indy Racing League, the Breeders' Cup, the X-Games, the Kentucky Derby, the US Open, the MTV Video Music Awards, the US Presidential Debates, and the 2009 US Presidential Inauguration as well as other newsworthy events. BSI's cameras are also used by NASA in the astronauts' helmets. BSI UK office was opened in 2011 to expand its overseas operations.