The uplink unit is designed fully redundant and equipped with a 1,5m antenna
Broadcast Solutions delivered two fully equipped vehicles to Ictimai TV in Azerbaijan in March 2012. The room in the 8-camera production vehicle based on a Sprinter 515 was optimally utilized due to separation of video/ audio operations and control room and offers a total of five working places.

The latest HD technology is installed in the vehicle, including a Ross Video video mixer, Yamaha audio mixer, Lynx Modular Equipment, Nevion router, Riedel Performer and a EVS Nano. In the rear of the SNG and support vehicle is space for cameras and accessories, in the front the uplink operators workspace with both side accessible doors. The uplink unit is designed fully redundant and equipped with a 1,5m antenna and encoders and modulators as well as IRD's from Ericsson Television. The vehicles can be operated independently with the built-in generator. Ictimai TV Azerbaijan will use the vehicles for the increased volume of productions around the Eurovision Song Contest 2012 in Baku.

If the 2011 contest took place under the slogan Feel your heart beat!, Baku 2012 will go into the history books under the motto Light your fire!

Azerbaijan has been known as the Land Of Fire for a while now and the symbol of fire and flames is used extensively across the country. The people of Azerbaijan also take great pride in this association with fire. 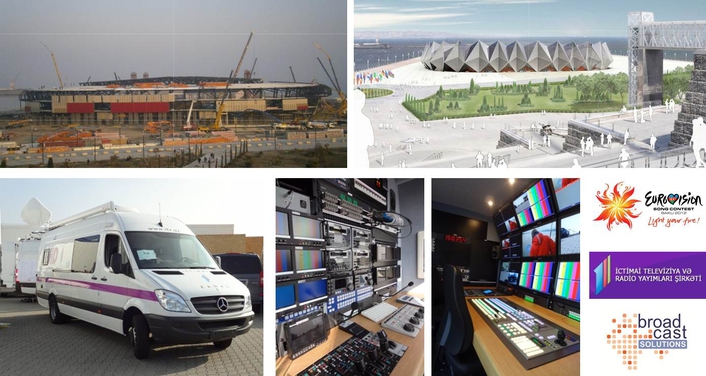 All of that can be seen visually in the theme art of the 2012 edition of Europe's favourite TV show. By the way, if you look at the main symbol closely, you can see much more in it, than you'd expect at first glance.