Green Screen Magic Made In Hollywood with Virtualsets.com and TriCaster 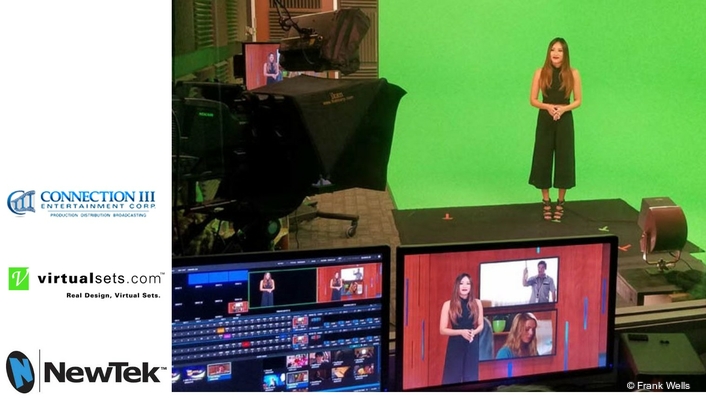 Bringing the magic of Hollywood to the small screen is a specialty of the award-winning, Emmy-nominated production and distribution house, Connection III Entertainment Corp. “We have a full-fledged digital studio on par with our competitors with billion-dollar parents,” says Cleveland O’Neal III, founder, President and CEO of Connection III. “The beauty of green screen today is, if done correctly, it can be truly indistinguishable from a practical set.”

“We love to make it seem like we have this huge studio and really we just have this one room with a green screen,” Neufeld shares.

The twenty-plus-year-old Connection III’s portfolio includes family-friendly, multicultural original television programming and motion pictures. Currently, the company produces and distributes four nationally-syndicated, weekly, half-hour television series. For over a decade, the Made In Hollywood TV series has brought its viewers the stars, directors and producers of each weekend’s new box office movie releases through celebrity interviews, on-set and on-location coverage and a VIP perspective of red carpet premieres. As with Made In Hollywood’s emphasis on film-making as opposed to celebrity-centric coverage, Made In Hollywood: Teen Edition is an educational and informational companion spin-off that focuses on the creative, technical and artistic skills of feature-film production, including insight into industry careers.

Made in Hollywood Now is the newest series on Connection III’s roster, covering new content for all screens – Blu-ray, streaming, video-on-demand – as well as early peeks of future releases. The company’s fourth production in current distribution is Live Life and Win!, offering teen success stories to inspire young viewers. Connection III programming is available in over 90% of U.S. television homes through national syndication to stations including CBS and Fox O&O’s, among many other major affiliate stations, along with international distribution. 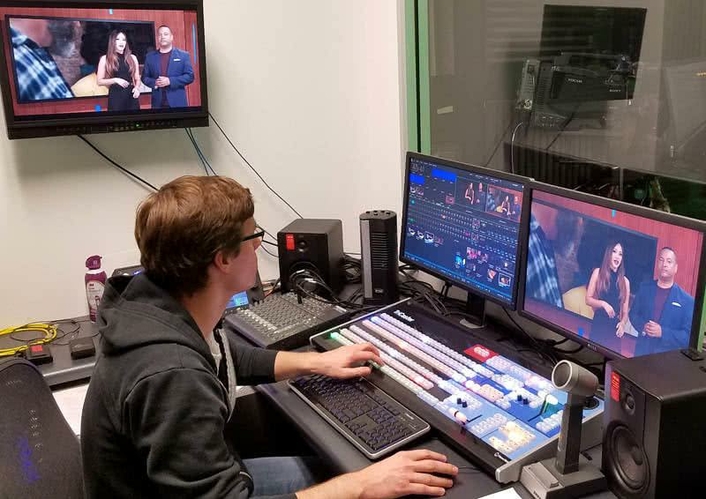 “When we’re shooting,” says Neufeld, “I’m sitting in the booth at the TriCaster and controlling what’s going on in those screens, switching when it needs to be switched so that whatever the hosts are talking about, what’s going on behind them corresponds with what they’re saying.”

On recommendation from Connection III’s technology consultant and installation firm, KeyCode Media, and following an evaluation in KeyCode’s space, the Connection III studio was built with the TriCaster in mind. 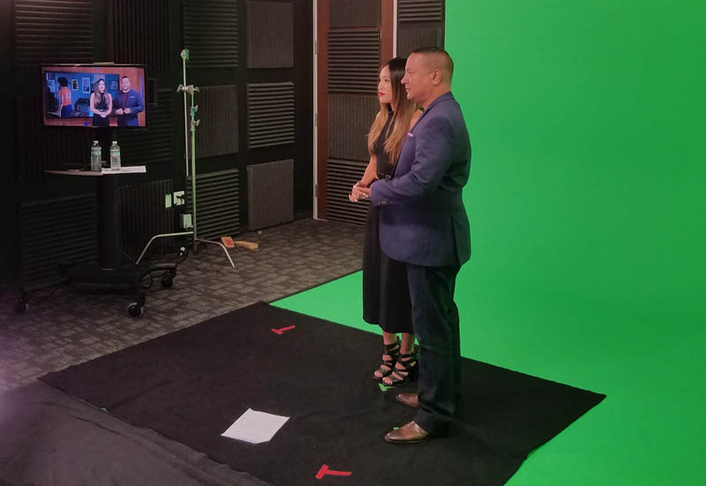 Hosts Kylie Erica Mar and Patrick Stinson on the Connection III set during Made In Hollywood production. The confidence monitor shows the hosts composited on to one the virtual sets designed for Connection III by Virtualsets.com.

With the TriCaster and the use of virtual sets, Neufeld reveals, “We don’t actually have to ever move the camera. We just put the hosts on a different set. We have just one camera and we take it and we movie-magic it, make it to look like we have several cameras. We have a number of different virtual sets that we use throughout the shows. Sometimes hosts are both on one side of the [virtual] monitor or sometimes they’re on either side of a monitor, so we do have a person who adjusts the camera [panning and zoom] and also runs the teleprompter on the camera.

“We bought the TriCaster mainly for the virtual set capability; we’ve always used virtual sets,” Neufeld continues. “At the beginning, we used some of the built-in stock virtual sets that come with the TriCaster, but, we got out of that pretty quickly just because we wanted something unique, not something that everyone with a TriCaster has.”

Tim Hedegaard is president of Virtualsets.com, specialists in providing realistic virtual sets since forming in 1997. With virtual sets, says Hedegaard, “A lot of times people look at a production and think, ‘Hmm, something is just not right.’ They can’t tell you what they could do to fix it, but they just know something isn’t right. Our goal is to make virtual sets that really do look realistic, where the normal viewer doesn’t realize they’re watching a virtual set. In fact, they don’t even pay attention to it. It’s not even something that’s even computing in their mind.”

As its clients have implemented its designs, Virtualsets.com has worked with them to refine and optimize performance, developing expertise in how various systems operate. “The biggest part of it is having a greater understanding of what the technology can do and can’t do,” says Hedegaard. “We generally design all of our sets to be platform independent and that allows us to use them for multiple different systems. We try to have a really strong understanding of those systems and not just go off of the marketing brochure from any manufacturer.”

In the case of the TriCaster, for example, Virtualsets.com is testing the ability to extend key frame capability to accommodate dolly shots through some file and code manipulation. Such efforts pay off for his clients, says Hedegaard, “Ultimately, it makes their production better; production values go up.” 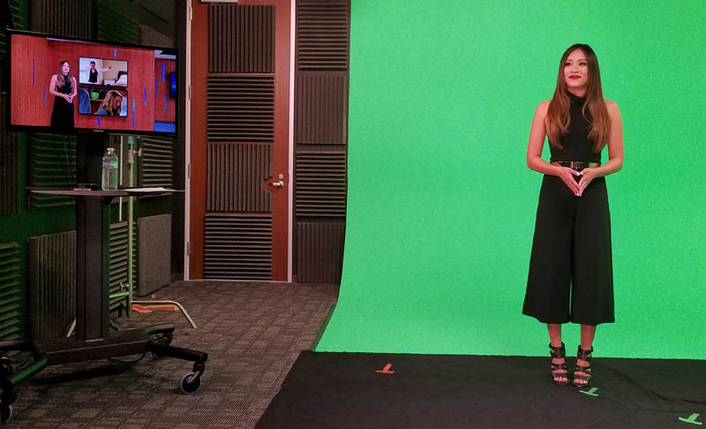 On the left, Made in Hollywood host Kylie Erica Mar inhabits a Virtualsets.com set, while physically her presence is in front of Connection III’s green screen.

What makes a virtual set realistic, or not, keys on the lighting, Hedegaard shares. Where light pools, where shadows fall, the sparkle on a piece of chrome, and, by way of example, floor tiles that don’t all reflect light exactly the same. “If it were a real floor,” he elaborates, describing a particular news set, “there might be a slightly different color tile, a slightly off-true angle, maybe a tile set a little lower on one side. That’s how real titles behave. Ultimately, what this comes down to is making sure that those things that would occur in real life occur in our virtual designs.”

“The built-in TriCaster keyer is quite good,” says Hedegaard, but adding that it’s not “absolutely perfect with fine hair detail and transparency. This is the world we’re working in, where really good, isn’t good enough.” Hedegaard says he spoke with Dr. Andrew Cross, president and CTO for NewTek, about his need to combine the compositing capabilities of an external keyer with the excellent virtual set capabilities offered by the TriCaster. Unlocking software to accommodate this marriage of capability now “works exceptionally well” says Hedegaard, adding substantially to the realism of a virtual set production, without adding prohibitively to the price.

Connection III, says Hedegaard, wasn’t in a position to spend six-figures on a virtual set system. “And also,” he adds, “they don’t have the staff to have several engineers keeping track of it and calibrating it all the time.” But they didn’t have to spend that much.

“The TriCaster, bang for the buck, is just off the charts,” enthuses Hedegaard.

“They pretty much turn it on, fire up all their lights and they roll through their presets. And they do it very quickly. Obviously there are tons of different switchers available. At the price point, there are no other switchers than the TriCaster that will do the level and complexity of Connection III’s virtual set for an equivalent price.”

For the future, Connection III has the capability to add cameras and move into streaming of content, facilitated by its TriCaster. Where set updates have been requested, Virtualsets.com has proven that refining its designs is a simple and seamless process. Attention to the fine details and professionalism in production is the path to achieving realism in virtual set design and use. Through thoughtful design, implemented with an in-depth knowledge of operating systems, combined with great lighting, with compositing that reveals details as fine as individual strands of hair and as subtle as the shadows the studio lighting throws on the green screen set, and with true-to-life reflections, along with powerful control of keyed elements in virtual monitors, realistic results are achieved daily at Connection III.