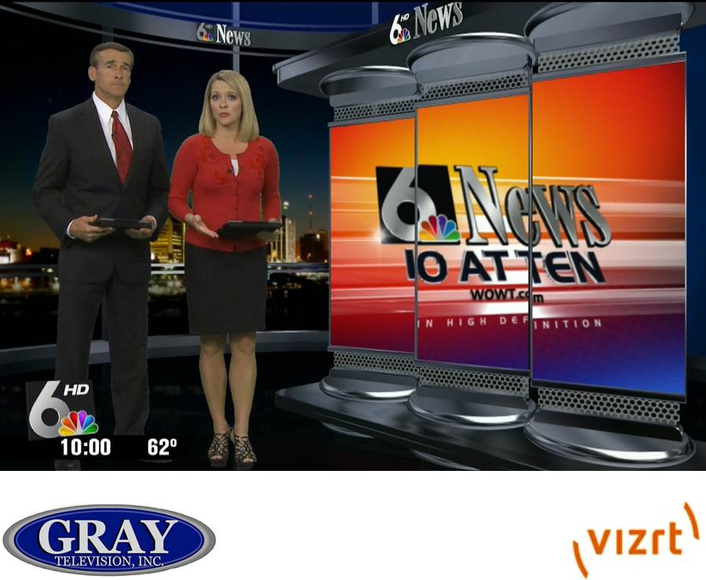 With the system already operational in 19 of the affiliates, Gray is rolling out this new model to additional stations every quarter. Fully integrated with existing workflows and automation processes, it has allowed Gray to quickly implement a centralized hub of resources and technology with a single graphics solution across its entire network. Ocon said, "When we're relaunching our stations, we don't have the luxury of a six- or nine-month launch period. We're looking to get it down to twelve weeks or less. So having a powerful but simplified graphics package we can rely upon is key. "

To see a video of Gray Television’s Ocon speaking with Vizrt Corporate Communications Editor Chris Black about the Gray Model and its use of Vizrt products, please click here.

Ocon said, "What really separated Vizrt from the competition is the ubiquitous use of their hardware. We can take Viz engines and plug them in anywhere in the studio and the station. With other systems, the ticker system might be a different box with different inputs. With Vizrt, we can use the same engine for everything just by configuring it a little differently. This IP-flexibility is inherent inside Vizrt products, and one of the main reasons we selected them."

"A basic Vizrt system includes an Engine, which is the graphics renderer, and a Trio, which is the operator console/interface. You use a combination of Engines and Trios to run your graphics. It's very modular, so if there's ever a technical problem and you lose your main engine, you can literally patch in one of your engines from another part of your system to do your graphics. Vizrt gives our stations tremendous flexibility. "

Creating a Centralized Hub Model
Traditionally, station graphics production has used separate artists to render and operators to manage the graphics, with each station having its own dedicated staff. Employing Vizrt’s products within the Gray Model enables the broadcaster to create a more efficient central hub, while also giving their stations autonomy and control over their work. Ocon has used Gray's Omaha station WOWT as his pilot site for much of the system testing and development that Gray then deploys to the other stations throughout the network. 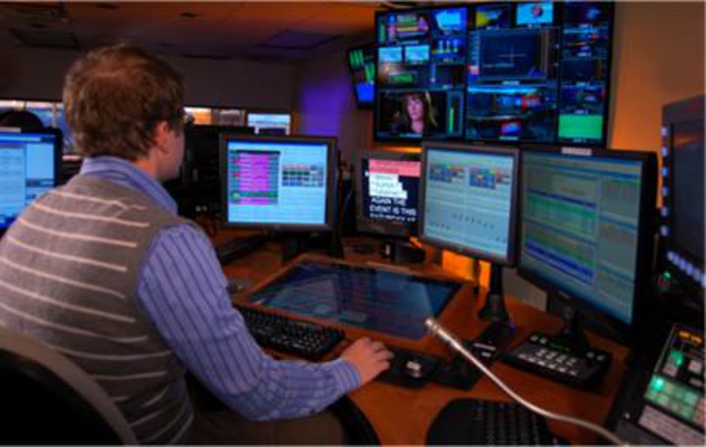 Vic Richards, Director of Promotion and Media Production at WOWT explained the hub strategy: "We have three artists who work on Vizrt packages, creating graphic templates for all of the stations. Each template has a similar functionality and look. Our stations use these templates on a daily basis simply by filling them in. Because the basic design is already approved, the graphics just need to be checked locally for content, to make sure everything is spelled correctly." Not only is it easier for the stations to achieve consistency within each broadcast, but the graphics are also consistent with the other affiliates in the network to better reinforce the Gray brand.

Evolving a More Streamlined Workflow
Richards said this hub strategy has made dramatic changes in the newsroom, studio production and automation -- not just in workflows, but in staff assignments as well. "In a traditional system, an artist takes requests from the newsroom, and physically builds the graphics. During the newscast, the CG operator advances them. Now, control of graphics production is actually in the hands of the newsroom staff, which builds its own graphics using the templates. Then the Ross OverDrive automation system triggers the graphics during the newscast, essentially taking the place of the CG operator. Everything's rendered in the graphics card, on the fly, the moment it hits the air. Vizrt allows one person to do everything."

Mike Fass, WOWT's Media Production Manager, noted another advantage of the Vizrt system. "The graphics templates are vector-based,” said Fass.  “They're very small in file size, unlike, say, a QuickTime movie file. So one of our artists can modify a graphic and simply email it to the station. We're not using hours of upload time, or lots of bandwidth. And because Viz Engines don't store graphics with page numbers like a traditional system, they don't have to store large graphics files at the station itself. "

Reducing the Learning Curve
One of Ocon's major concerns is ensuring that his stations are properly trained on the new system. When an affiliate upgrades to the Vizrt system, Gray designates a technician at that station for three days of Vizrt training as a "superuser."

Two additional days of training for production and news users teach them to fill out the graphics templates. Richards noted, "We've found that the five day program is really all each station requires. And now that we're about three years into bringing the stations on line, we're having more people at the stations with superuser skills. So we're using those people as additional support for other stations."

Giving Smaller Stations a "Big Station" Look
The hub strategy has greatly reduced the redundancy of effort at Gray Television Group.  Ocon explained, "We can focus our best talents in the network at creating the template packages, customized for any station in any market. Stations don't need to have someone on site to create those daily graphics, just someone who can populate the template and then get them to air. So, that really helps their workflow. Once they're comfortable using the technology, the templates have the flexibility to let them stretch their wings a little bit creatively." This means that even the smallest stations in the Gray network can employ graphics that are as sophisticated as those at the larger stations. Ocon said, "That's one of the biggest things we get feedback on. A Grand Junction can look like a Knoxville. And our viewers are very impressed."