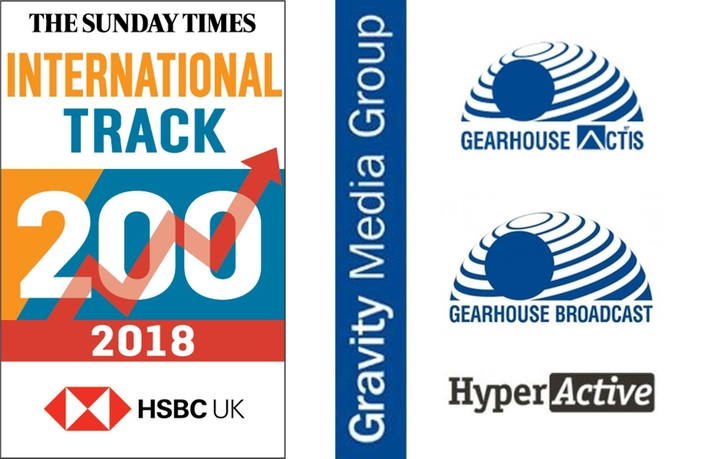 Gravity Media Group, the global provider of complex live broadcast facilities and production services, has again been named as one of Britain’s fastest-growing companies in the prestigious annual Sunday Times HSBC International Track 200. The awards are compiled by Fast Track and published in The Sunday Times each June. They measure the international sales growth of private mid-market companies over the last two years.

Having been ranked at number 160, Gravity Media Group’s CEO John Newton commented: “This recognition is yet another milestone for Gravity Media. It comes on the back of a period of sustained organic growth and a number of strategic acquisitions following TowerBrook Capital’s investment in the business in September 2016.”

As part of its strategy to diversify into new business areas and broaden its global service offering, Gravity Media’s recent acquisitions include Genesis Broadcast Services in Germany, Hyperactive Broadcast and Input Media, the latter two now both also operational in Australia.

Gravity Media has also invested heavily into three new state of the art mobile production units in the USA, boosted its 4K and HDR rental capabilities with a large quantity of the industry’s most in-demand cameras and lenses, and made several recent senior hires.

Newton added: “As consumers continue to shift the way they watch video content, Gravity Media’s evolving workflows have been a driving force in our position as a broadcast facilities provider that helps to change the way television is created.”

The Sunday Times HSBC International Track 200 awards will be presented at an invitation only dinner on Tuesday 11 September at the London Hilton on Park Lane.

Gearhouse Broadcast is a market leader in broadcast services and specialises in broadcast equipment rental, project solutions and systems integration. It offers huge experience and a proven track record in delivering major sporting and entertainment events.

Hyperactive Broadcast is a leading provider of dry hire cutting rooms, visual effects tools and production space for feature films and TV dramas. With a background in integrated Avid and EVS workflows, its engineers are trusted by the best names in the industry.

Input Media is one of Europe’s premier sports production companies, with blue-chip clients around the world. It employs a talented team of producers, directors and editors dedicated to producing creative and engaging programming and digital content for a wide variety of clients.