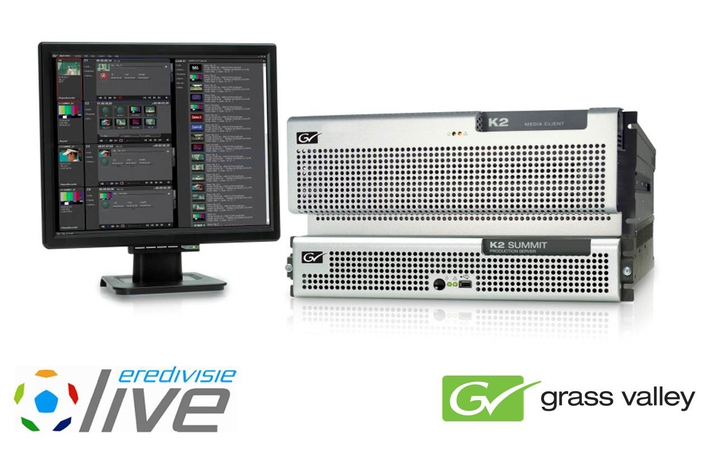 The channel is hosted by Technicolor at its Media Park in Hilversum
Eredivisie Live, the leading football channel in the Netherlands, migrated to high definition for the beginning of the 2010/11 season. Their new playout center uses Grass Valley™ K2 Summit™ media servers, chosen for their flexibility, power, and future-proofing.

Eredivisie Live started broadcasting in 2008 after winning the television rights to the Eredivisie, the Dutch Premier League. Alongside the finest of the Dutch Premier League domestic games it also has rights to key matches from international competitions such as the UEFA Europa League and top overseas action including English FA Cup. The channel is dedicated to European football, with highlights, documentaries, and commentary filling the time between live matches.

The channel is hosted by Technicolor at its Media Park in Hilversum, where Technicolor provides tech facilities and playout services for live broadcast and Video on Demand (VOD).

In 2010, the decision to move to HD was made, and Technicolor built a new multi-channel playout suite, based around the Grass Valley K2 media server using K2 Summit production clients. The backbone has three K2 Summit production clients and provides 12 channels total configured as five ingest and seven playout channels all connected into a redundant K2 SAN, with a dedicated FTP server with a 10 Gigabit Ethernet interface.

“We chose K2 Summit servers because of their extraordinary multi-format capabilities,” said Alex Vermeulen, Senior Systems Engineer for systems integrator and Grass Valley reseller D&MS. "Whether the need is for live HD ingested on game day, library archives of games played five years ago or for games yet to be played, the format of the footage is of no concern for us. A single K2 Summit can handle clips in any format including 3D, recognizing its native format and making the necessary changes, including aspect ratio conversion."

“We like the K2 Summit because it is a very reliable piece of machinery representing excellent value for money,” said Jurriaan Wittenberg, Systems Architect at Technicolor, Netherlands. “We already use the K2 Summit in the multi-channel playout suite we run on behalf of Dutch public broadcaster NPO. It has proved itself in scalability, flexibility, and file handling.”

“It's easy to focus on the production aspects of sports, but it is just as vital to have highly reliable and flexible servers back at headquarters,” said Jeff Rosica, Executive Vice President of Grass Valley. “We designed the K2 Summit media server to deliver every time, whether in a truck or in a playout center and it's great to see key broadcasters like Eredivisie Live recognizing the benefits of our very flexible, multi-format platform.”