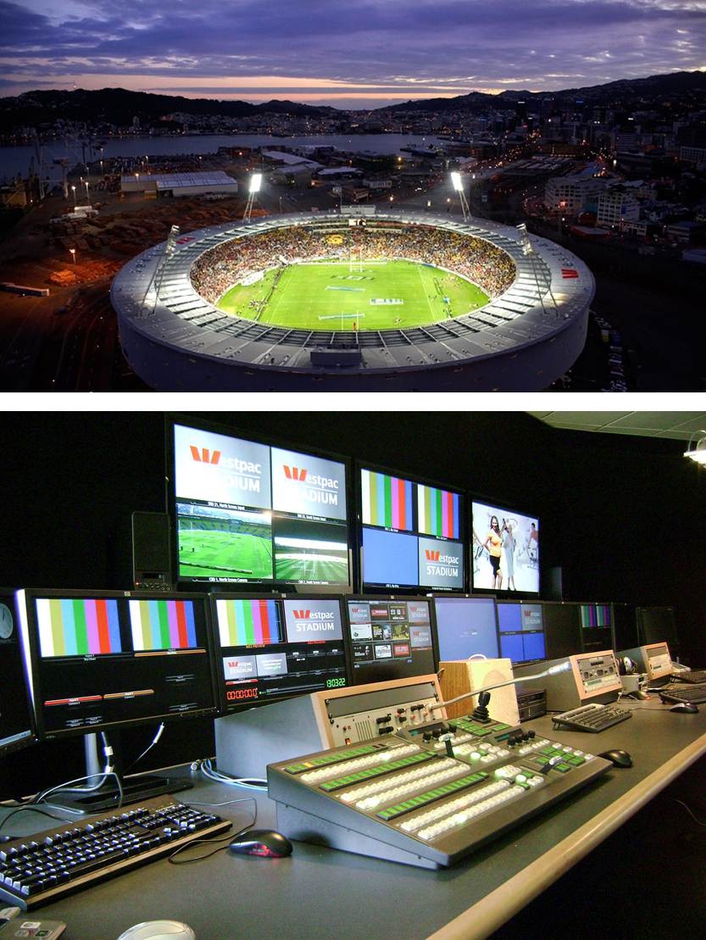 New Zealand’s Westpac Stadium Upgrades Control Room with Broadcast Pix Granite 5000 Video Production System
With the world moving toward widescreen presentations and digital production workflows, officials at Westpac Stadium, a 34,500-seat multi-purpose facility in Wellington, New Zealand, decided to upgrade its video production capabilities with a complete retrofit of its control room. At the heart of the overhaul is a Broadcast Pix™ Granite™ 5000 video production system, which feeds video and graphics to two large replay screens installed at the north and south ends of the stadium.

“From day one, we have had a production room with capabilities in excess of what any other ground in New Zealand had,” said Craig J. Bain, Westpac producer/director. “We are just ensuring that we keep up with technology changes and features available for our various clients. We are really happy with our new system, and Broadcast Pix has been absolutely fantastic with support.”

Westpac maintains a busy schedule of concerts and sporting events, and will host at least seven matches during the Rugby World Cup 2011 later this year. Before the upgrade, the 4:3 video production was stretched to fit the 16:9 replay screens. Through the Granite 5000, productions are produced in HD, then downconverted to widescreen SD for stadium replay (due to a fiber infrastructure that can only support SD). The 2 M/E capability of the Granite 5000 also allows Westpac to display a different presentation on each screen.

Gencom Technology, a global media technology solution provider and systems integrator with two offices in New Zealand, installed the Broadcast Pix system in December. Bernie Huynen of Gencom Technology said the company was tasked with a finding a solution that “could be operated by one operator for small events and up to three or four operators on larger events.” An on-site demo convinced the Westpac Stadium Trust that the Granite 5000 could handle the operational demands and again exceed the expectations of the clients, hirers, and patrons.

The Granite 5000 replaced an aging 16-input Ross analog switcher, Inscriber CG, and clip server. Using the system’s built-in Fluent™ Multi-View, Westpac was able to reduce a large bank of CRT monitors to four dedicated 21-inch LCDs for the technical director. One of the monitors, showing all the sources is split to the CCU position, is used for camera shading. For visitors and other personnel, the control room also has three 42-inch LEDs on the wall, which are fed by a separate Harris multi-viewer. In addition, Gencom installed a separate Harris router for additional system redundancy.

Bain is particularly pleased with Fluent Watch-Folders, Granite’s built-in file management system, because he can access new graphics and clips that have been created during a live production. “It’s an amazing feature of the system. We’re loving it,” he explained. “Watch-Folders allow you to add content while the show is live. You can see it pop up and it’s ready to use.”

Broadcast Pix is the leader in integrated live video production systems. Its Granite™ native HD systems are the only switchers with a server to provide the best file-based workflow. Its Slate™ systems create highly affordable hybrid HD/SD/analog productions. Both systems create compelling live video by integrating a production switcher with a suite of Fluent™ file-based software tools, including clip and graphic stores, CG, multi-view, watch-folders and macros. Broadcast Pix systems are a fraction of the cost of a conventional control room to buy, staff and operate. Customers include leading broadcast, webcast, entertainment, mobile, corporate, education, religious, and government studios in more than 80 countries.