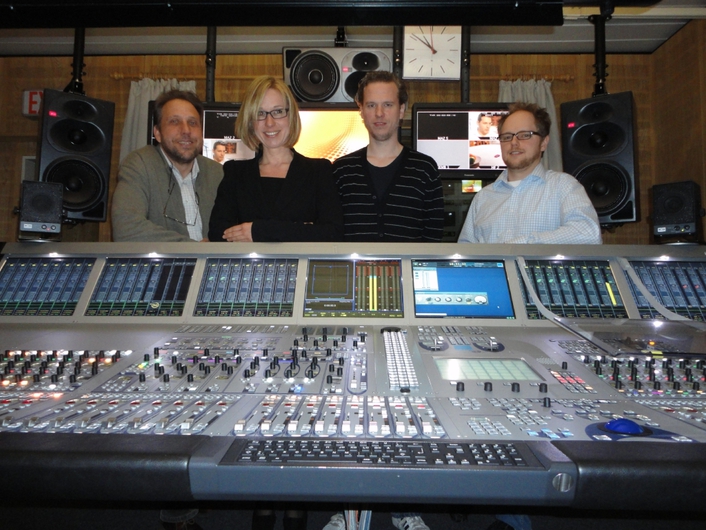 Lawo mc²90 replaces Lawo MC80 at ZDF's Duesseldorf branch - The ZDF team in front of the mc²90 in the control room in Düsseldorf
German national broadcaster ZDF has chosen a mc²90, Lawo’s flagship mixing console, to replace a Lawo MC80 that has been in use since 1995 in the regional Düsseldorf studio’s audio control room. This control room will not only be used for post-production and VTR editing, but also for live broadcast of the TV infotainment show ‘Volle Kanne – Service täglich’ (Full Measure – Daily Service).

The MC80 comes from the first generation of Lawo digital mixing consoles; the one installed in Düsseldorf was the very first that Lawo built. By autumn 2010, it had served reliably for over 15 years.

The addition of a new console was necessitated by the demands of today’s productions, which require modern technology and functionality, as well as the ability to network production components. The idea to replace the MC80 evolved in June 2009. The new console underwent test operation from February 2011, with the first show being broadcast live from the Düsseldorf audio control room on March 14, 2011. All wiring required for the broadcast and the mc²90 was completed on the preceding Friday. Thanks to thorough preparation, everything ran smoothly for the mc²90’s premiere. 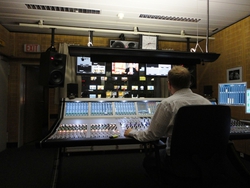 The new centrepiece of the control room features 48 faders (16-16-16) and 192 full DSP channels. Thanks to the console’s flexible control surface, ZDF can fit an additional eight faders in the limited space usually occupied by the central faders. Extra space for the installation of external devices is provided by an expanded central control area (‘Center Large’). For the mc²90, this comprises a full size monitor for the display of external video signals as well as a RTW meter. Of the four DSP cards, one, equipped with 48 DSP channels, provides redundant cover while the matrix/control room DSP card is integrated with the HD Core.

The 8k router card in the MKII HD Core is connected to three DALLIS systems, and designed with full redundancy, resulting in cutting-edge reliability. All monitoring and broadcast lines for the audio and video control rooms can be switched from the mc²90 to a Lawo crystal console with a single button press. With the most important sources connected directly to the crystal, workflow is not interrupted at all. Even switching time delays are a thing of the past — the only time required is that needed to make the decision to switch or not. Thanks to the open system architecture of the mc², the mc²90 and the crystal (as a back up mixer) can be integrated into the pre-existing infrastructure that comprises three Lawo zirkon consoles. The sources are connected via MADI, which allows to save on the wiring.

Lawo, headquartered in Rastatt, Germany, specialises in developing, designing and manufacturing mixing consoles and matrix systems for radio and TV broadcasters, as well as for use in live events. Standards of high quality and innovative technology are supported by more than 40 years of experience in the field of professional audio technology.Lawo’s product range covers digital audio mixing consoles for use in radio, broadcast, production and live applications, including the required software. In addition to the provision of matrix systems and audio networks, Lawo also carries out project engineering tasks and acts as a main contractor for radio OB trucks; these services include user training and maintenance. This high level of expertise results in a comprehensive support service for Lawo customers.