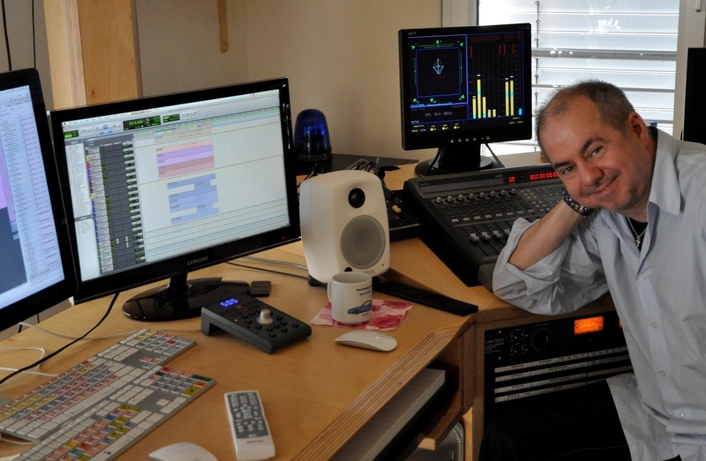 Successful Composer Uses RTW Solution for Monitoring Control and Signal Analysis at His Cologne Studio
RTW, a leading manufacturer and distributor of professional audio metering and control devices, proudly announces that successful German musician and composer Helmut Zerlett implemented an RTW SurroundControl system for integrated monitoring control and signal analysis into the design of his surround-sound compatible Cologne studio. In Germany, Zerlett is a well-known band leader for many popular late-night television shows.

Zerlett started his musical career as a studio musician and keyboardist for the Food Band, which released its first album in 1979 in England. In 1987, he played the keyboards in Marius Müller-Westernhagen’s band and has accompanied the shows of German popular entertainer Harald Schmidt since 1995. In addition, Zerlett is a successful composer of film scores, of which he mixes and produces in his professional recording studio established in Cologne in 1999.

Whenever possible, Zerlett prefers recording using real instruments rather than using electronic samples. In cases where there is not a budget for an extensive orchestral production, he insists on live-recording, at least having present critical solo instruments including a violin, cello, guitar and trumpet. “In my opinion, the participating musicians have a major impact on the liveliness of the musical results,” says Zerlett.

Zerlett is committed to using classic analog recording systems, such as two Neumann M49b tube microphones and numerous Neumann processing modules. Using RTW instruments for precise metering has always been a matter of course for him.

“When I took my first steps in a recording studio, an RTW unit was the measure of all things. It was the interface between the studio and the outside world,” he recalls. “Whenever it came time to ensure that an analog or digital production met the requirements of the medium at hand, the RTW peak meter was the decisive factor to me.”

So when he converted his own studio to surround compatibility a few months ago, it was obvious to integrate an RTW instrument that included a surround-sound analyzer into the new setup.

“Of course, editing surround material is potentially more error-prone than processing stereo signals. After the conversion, accurate signal analysis has become more important to me than ever before,” says Zerlett.

The original plans for his studio included an independent surround-enabled monitoring controller but it turned out that it wasn’t necessary since RTW’s SurroundControl range already offered everything that was needed for integrating monitoring control and metering in a smart and efficient fashion.

The 8-channel SurroundControl systems provide many powerful tools for audio visualization including the successful Surround Sound Analyzer with a convenient monitoring controller and extended routing functionality. As a result, Zerlett now owns a fully integrated system for analog and digital audio.

Zerlett is also a big fan of mixing music in surround. “I think the step towards surround sound is as significant as that from mono to stereo,” he says. “From my point of view, the now available extra dimension is very important, in particular, for music. To me, SurroundControl is the perfect complete solution for conveniently monitoring and evaluating surround signals.”

Zerlett is also very happy with RTW’s continuity-based product policy. “I like the fact that RTW does not offer an upgraded version every six months or so, which makes the unit I just bought look outdated,” he says. “With regard to protecting your investments, that kind of continuity is very important, in particular, to pro-audio users.”

Zerlett is currently composing the scores to two new movies and a TV production and is also producing a new solo album. In addition, Zerlett contributed music to Der ganz große Traum, a film from 2011 about the introduction of soccer in Germany.

RTW, based in Cologne (Germany), has more than 30 years of experience in designing, producing and marketing sophisticated recording-studio systems. The company focuses its business on peak meters and audio vectorscopes, which are in use in the leading recording studios as well as by radio and TV broadcasters worldwide. The company’s current product portfolio includes its TouchMonitor series, a new range of audio metering products that combine unprecedented flexibility and modularity with an intuitive user interface and multichannel TFT-based monitoring systems for integrated surround-signal visualization using the unique and groundbreaking Surround Sound Analyzer. In June 2008, RTW was certified for the internationally accepted DIN EN ISO 9001:2000 quality-management standard.