Aaron Reynolds custom Genelecs add to the unique design of his studio
HHB Communications has supplied London’s Wave Studios with a bespoke 7.1 surround sound system comprised of white Genelec speakers with a black grill to fit with its new design scheme.

Wave audio engineer and company partner Aaron Reynolds wanted to steer clear of the traditional studio surroundings when redesigning his studio to provide clients with the experience of working in a relaxed lounge environment. HHB also supplied Neve 4081 preamps, which were built into the studio furniture and remain unobtrusive. 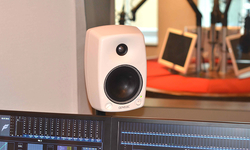 Working alongside renowned acousticians White Mark Design and interior designers B3, Wave Studios redesigned the room with a surround sound system consisting of the specially manufactured black and white Genelec 8040s, 1037s and 7070 subs. Reynolds explains that the concept of the room began with his idea to have custom speakers: “Genelec was my speaker of choice because they produce such an accurate sound that is deep and rich without being too bass heavy. The 8040s have an incredibly crisp and detailed sound that helps me determine what a mix will sound like when it is played through television speakers. The Genelecs were the main thing I knew I wanted before I designed the room, and the colour had to be white with black cones. I am very pleased that Genelec was able to make us these bespoke speakers because they really do provide something different from the normal studio vibe, and our clients love the look and sound of them.”

Custom finished by Genelec in their Finland HQ, the bespoke 8040s are bi-amplified nearfield monitors featuring an MDE (Minimum Diffraction Enclosure) with rounded edges and curved front and sides to achieve a smooth frequency response and precise imaging. They feature a 6.5-inch bass driver and a 0.75" metal dome tweeter, driven by two 90W amplifiers. The powerful Genelec 1037 is a three-way active monitor driven by 180W Bass, 120W Mid and 120W Treble power amps with a 12-inch bass driver, 5-inch mid driver and a one inch tweeter. The mid driver and tweeter are housed in Genelec’s trademark Directivity Control Waveguide.

HHB Manager, Professional Audio Sales Greg Wheeler stated: “We have been supplying equipment to Wave Studios for many years and Genelec was very helpful in meeting the request of our clients by making these bespoke monitors. The sound quality of the Genelecs and the custom colour scheme really make the studio a one-of-a-kind room. We are very pleased to be able to suit the unique needs of a very valuable client.”

Wave Studios was established in 1999 on Soho’s Great Pulteney Street as a two-studio complex specializing in audio to picture work for commercials and has since grown to be one of Soho’s premier post houses with nine studios spanning over three floors. Its impressive client roster included the likes of Nike, Guinness, Aldi, Hennessey and many more.