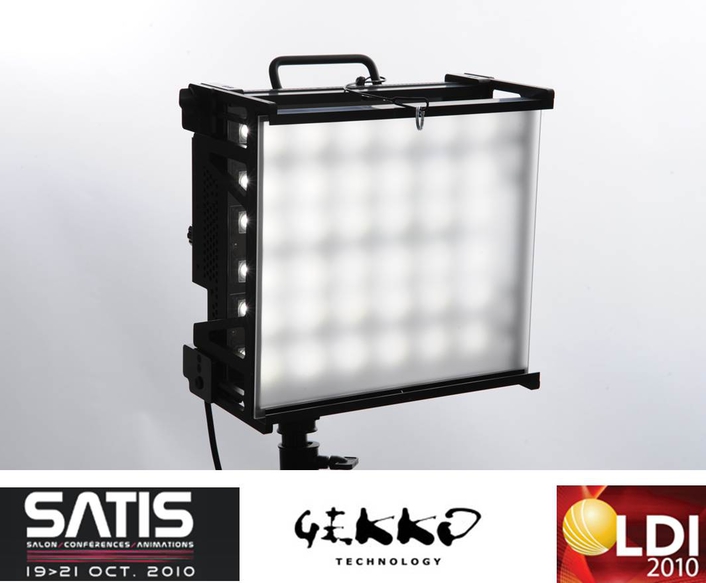 "Our aim both at SATIS and LDI will be to emphasise the many advantages our LED-based products offer across the environments of studio, stage and general entertainment lighting," comments Gekko Technology 's founder and Managing Director David Amphlett. "The high efficiency, broad spectrum and colour stability of Gekko LED based fixtures can be utilised across a wide range of broadcast and entertainment applications. With fixtures which can be mains or battery-powered, and which render flesh tones well, Gekko's product range offers solutions to many lighting challenges."

Co-exhibiting at SATIS with French reseller Cartoni, Gekko Technology will represented by Business Development Manager Ian Muir in Pavilion 7.3 of the Porte de Versailles conference and exhibition centre. Held annually, SATIS is the biggest exhibition of video, film and radio production equipment in France. This year's show is open October 19-21.

Gekko's exhibits at both events will include the kezia 200F and kezia 200E, both hard-source luminaires incorporating the multiple-award-winning kleer colour technology. Controllable via DMX or an optional rear panel, the kezia 200F can be adjusted in colour temperature between 2900K and 6500K. Integral presets allow rapid selection of 2900K, 3200K, 4300K, 5600K and 6500K. An integral colour-feedback loop ensures consistent colour temperature as ambient conditions change or as the unit ages. Colour temperature also remains constant when the light is dimmed. Drawing less than 200 W of power, the kezia 200F has an output roughly equivalent to a 1 kW tungsten fixture and generates far less heat than traditional technologies.

Also on show in Paris and Las Vegas will be the the Gekko karesslite 6006-DD. A soft light designed for studio and location use, this has twice the number of emitters and hence twice the brightness of the existing karesslite 6006. Available in daylight (5600K) and tungsten (3200K) versions, it incorporates a 6 x 12 emitter format in a 300 x 300 mm panel with a front-to-back depth of 165 mm and a weight of 4.8 kg including diffuser. The karesslite 6006-DD can be used as a single soft light source or deployed with additional karesslites to form a large light source. As with all Gekko's products, colour temperature remains consistent throughout the full range of intensity variation.