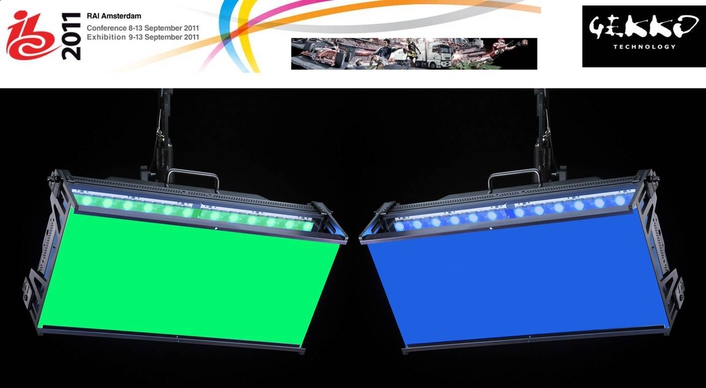 Gekko Technology's new karess 6012 FX blue/green switchable softlight
Gekko Technology has chosen IBC 2011 as the launch venue for a major addition to its industry-leading range of LED film and television lighting systems. Designed for special effects and chroma-key work in studios or on location, the new karess 6012 FX is a blue-green version of the karess soft light.

Switchable between blue (440 nanometre) and green (525 nanometre)outputs, the karesslite 6012 FX incorporates a 6 x 12 emitter format in a 600 x300 millimetre panel with a front-to-back depth of 165 millimetres and a weightof 7 kilograms including diffuser. It produces a high quality source light withconsistent colour throughout the dimming range. One of the advantages ofusing LEDs as a source for effects work is the narrow band spectral emission,enabling a much better key.

Being LED-based, the karess 6012 FX is considerably more efficient than traditional film or video production lights and emits very little heat. Traditional sources utilised for chroma-key can waste light output because a relatively small element of the green or blue is at the required wavelength. Power consumption is 85 watts and, when karess 6012 FX is used on location, more than 90 minutes of continuous operation can be achieved from two rear-mountable V-Lock batteries. Power can also be sourced from a 12 to 40 volts DC feed via an XLR 4 connector, or from a mains supply.

Flexible control is a feature of Gekko's karess series. On-board dimming  and switchable sectors are incorporated as well as integrated DMX. An integral diffusion grating makes the output properly single-source with minimal light loss, and two egg-crate options can be utilised to make the source more directional. Accessories available include a range of mount options, a yoke, spill kill, remote dimmer and soft transit case.